Ask Erin: My Partner And I Found Out The Guy We’re Hooking Up With Is Engaged 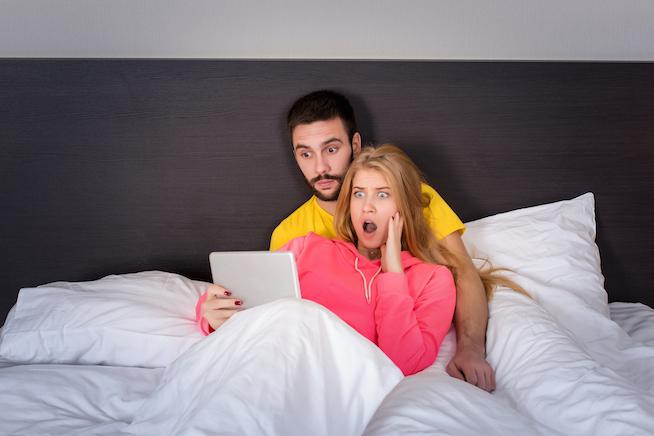 The problem is, when we were at the bar he showed us a picture on his phone, from a social media page. We looked him up later to add him, and he is engaged! We asked him while we were at the bar if he had a girlfriend and he said “No.” He said he had some platonic female friends but that's about it, nothing serious. Now that we have this information we feel pretty unsure about him and the entire situation. The sex was wonderful, we have excellent chemistry, a lot in common, but now knowing that he lied to us we are confused and a little hurt. I even stressed to him how important honesty and open lines of communication is. I also feel conflicted because we found out about his engagement through his social media page, not directly from him, and I feel almost as if we were snooping (though it was public, and that was not our intention!).

Is it wrong of us to continue what we've started with him, now knowing that he's engaged? Do we even have the right to feel hurt or betrayed, as we aren't in a relationship with him at all? Mostly what bothers us is that if he was ok lying about that, what else is he lying about?! And, we believe in marriage and don't want to be responsible for hurting his future spouse (assuming she doesn't know, or why else wouldn't he tell us about her?) What should we do?

It’s always disappointing when we find out that someone, be they friend, lover, or both, has lied to us. I agree this is a red flag, no matter what type of relationship you had or have with this person. Let’s address your specific concerns:

Before moving forward, you need to ask him directly about his status. It’s completely reasonable that you would look at or add his social media page, especially since it is a public page. Unless he laid down specifics about not getting involved in each other’s lives beyond the sexual relationship, it’s normal that you would add a new friend on social media. So, in no way should you feel like you were snooping.

However, it is questionable as to what he owes you. This may be indicative of why it can be problematic meeting people online. And, I agree, if he lied about this, what else is he lying about? When we engage in sexual activity with someone, we are opening ourselves up to intimacy in both physical and emotional ways, particularly if this is an ongoing arrangement. I would make sure that anyone you bring in to your marriage on a regular basis, is someone you can trust.

You need to ask, straight out, if he is indeed engaged (you can be honest about how you found out) and if she is aware of his outside sexual relationship/s. You don’t need to feel guilty about what you’ve done thus far. But, I do think you need to consider continuing if he is betraying his fiancé. It’s less a question of whether or not that is wrong, but how that would make you feel. I gather from what you’ve said, that having an affair is not what the two of you have signed up for.

Be direct, be honest, and make decisions moving forward that leave you with a clear conscience.

If you have a question for me about dating, marriage, sex, exes, pasta salad, support groups, Six Feet Under, death rock, puppies, or anything at all, email me at rarelywrongerin@gmail.com. As always, your anonymity is golden. xoxo

If you like this article, please share it! Your clicks keep us alive!
Tags
Ask Erin
polyamorous
sex advice
cheating
infidelity