I'm A 22-Year-Old Virgin, And My Doctor Won't Treat Me Because Of It 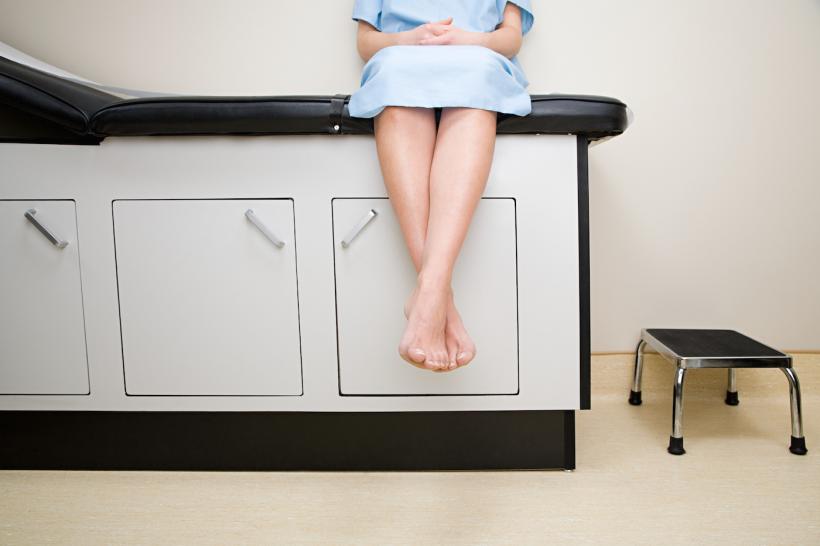 I’m twenty-two, damn it. And I’m sick of being treated like a child when comes to my vagina.

I’m 22 and in a johnny; my gynecologist comes in. She frowns. “I know you have a hard time, but we have to at least try to examine you.”

I do. There is so much pain I get dizzy. The familiar feeling of being torn apart. I turn my head to the side and stare at brochures talking about birth control. Soon they are spinning into a colorful blur. I start to cry. She rolls away from me with a sigh. “Do you have boyfriend yet?”

I scrunch my eyebrows at the sudden change of conversation. “I don’t have time for that at the moment. I don’t really want one. I’m busy.”

My gyno types something into her computer. “Well, you need to find one and do the deed soon. Your hymen is so close to the opening that I can’t examine you. Soon I’m just gonna pop it myself, and you don’t want that.” She laughs.

I can’t get a pap smear. I can’t be examined. It’s too painful. This makes me the bane of my gyno’s existence.

I stare at her, not able to comprehend a fellow woman saying that to me. I’m not sure why she’s bringing it up in the first place. I blink back tears, refusing to cry more. I just look down at my bare legs and nod, hoping she’ll leave the room. She does and I cover my face while the space between my legs burns.

Pelvic Floor Dysfunction is a well-known secret. It affects one in four women, but not many doctors know or acknowledge that it’s real. Maybe part of the problem is that it’s hard to test for. I personally exhausted every other possibility before it was suggested. Maybe another reason is that there is no easy cure for it, no pill to pop.

Having Pelvic Floor Dysfunction means the muscles in my hips are weak or too tight, and this makes them do the opposite of what they are supposed to. This causes issues with going to the bathroom, leads to very painful period cramps, and ultimately means that my pelvic floor has dropped. This means everything else has dropped as well, leaving things closer to the surface — like my hymen. It’s right near my entrance.

I can’t get a pap smear. I can’t be examined. It’s too painful. This makes me the bane of my gyno’s existence. Of every doctor's existence.

Because apparently the only way to examine my insides is through fingers. I’ve received eye rolls when I suggest ultrasounds or x-rays.

Being a virgin has nothing to do with my condition — it is purely my choice. There is no religious reason and I’m not waiting for marriage. It’s simply been a matter of not having time for relationships to develop that far, and that losing it hasn’t been important to me.

Honestly, it doesn’t come up in everyday conversation. It doesn’t affect how people see me. Only medical personnel look at me like some sort of freak. I’m sick of getting blamed, I’m sick of not being believed, I’m sick of doctors trying to shove something inside me when I've told them that they can’t.

One can only take so much of opening the same wound. I've wondered if I should just shove a tampon in and get it over with — to grit my teeth and deal with the pain — just so they would stop looking at me the way they do.

Honestly, the shame almost made me not write this essay.

I also found out there are different types of hymens. There’s your average hymen, but also an imperforate hymen that is completely covered — not even periods can get through. It requires small surgery to get rid of. A microperforate hymen has a smaller opening than average, meaning tampons can be difficult to use; it also requires minor surgery to widen it. A septate hymen has two openings instead of one, causing issues and also requiring surgery. I’m curious now as to how many doctors know there are different types of hymens — it’s never been brought to my attention. I’ve always wondered if the pain has more to do with something hurting the inside muscles than my hymen; the pain always feels so much deeper.

For some reason, being a virgin automatically makes me unable to know my body. Like somehow sex equates to the only way of knowing your body inside and out. While I admit there are aspects that I don’t know, that has more to do with the act of sex than my health. I have done research on my inner workings for years.

It started when I was a teen and had terrible period cramps. I was in the hospital once a month because the pain would be so bad. My uterus felt like a pumpkin being carved and scraped out. But I was told that was normal. Suck it up. I just wasn't used to being a “woman” yet. Then I was injected with drugs and sent on my way.

Despite research and over a decade of being a “woman,” as soon as a doctor hears "virgin," they hear ignorant or paranoid, or my personal favorite, hysterical.

Then there is the whole "are you pregnant" thing. When I tell them that there is no way, they say, “Are you sure?” Like maybe I had sex and didn’t know it. Like they can’t believe a woman my age is a virgin. I finally came up with the comeback of, “Unless I’m carrying the new baby Jesus, no.” That’s when they look away and move on.

I’m twenty-two, damn it. And I’m sick of being treated like a child when comes to my vagina.

At twenty-one, I was sitting up so tightly that my spine might snap, sitting on a leather table waiting for my first gynecologist appointment. I couldn't stall anymore. I stared out the window at the gauzy sunlight while swinging my legs. The cream walls were a calming neutral. I would be exposing the most vulnerable part of myself to someone for the first time.

She came in and smiled. We shook hands, she told me her name, asked me to change into a johnny. More waiting. I was cold. She came back. I lay down and took deep breaths. I spread open my legs and put them in the stirrups and tried to not panic. I resisted the urge to push the johnny down and cover myself. I counted the smiling faces of women on the birth control brochures. I heard her putting on a glove, the screech of a mostly empty bottle, then something cold touching the outside of my vagina.

Then came searing pain, like a flaming knife trying to cut me in half. I winced and tears instantly came to my eyes. My fingers tore through the paper covering the table. My legs tensed and started to pull towards me. She grabbed a leg.

She sighed and the glove snapped off of her hand. “I can’t properly examine you like this.”

“What should I do then?”

“Basically, since you aren’t sexually active, you have a year to pop your cherry.”

“Yeah, find a boyfriend or maybe use a tampon. Do you use tampons?”

“Well, you have a year to either get a tampon up there or get your cherry popped.”

My eyes bugged out of my head. I had never been spoken to like that before. Who the hell does she think she is? How can a doctor say that — how can any professional say that?

My face turned red. My mind was blank. I couldn't believe any of this was happening.

Before I could say anything, she left, and I was alone in the room, staring at my spread legs, suddenly so foreign.

If you like this article, please share it! Your clicks keep us alive!
Tags
virginity
Sex
gynecology
sexism
healthcare
reproductive health