7 Danger Zones I Navigate Every Morning 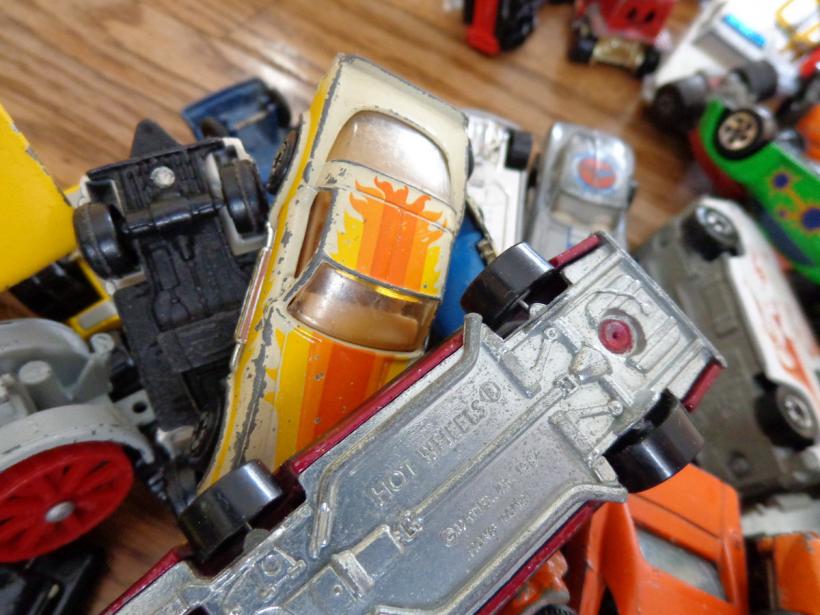 A Matchbox car is never, ever found alone — they always drive in a convoy.

Some mornings feel like the day wakes up two hours before I do — there's just no other way to explain the mess that greets me after washing the sleep out of my eyes. (In true SAHM fashion, though, that can be hours after getting up. Please tell me that's not just me.)

Here are the seven danger zones I have to navigate every morning:

Zone 1: The consequences of my insistence on cloth diapering

I'm certainly not in the mood to wash those out at 2 a.m.,half-asleep, but I'm paying for it in the morning. When I rise and shine, I have to begin my day by washing a pile of used cloth diapers.

The scent, I tell you. But, oh, the money saved.

In theory, we have two hampers, strategically placed in the bathroom and laundry room. In actual life, there seem to be hamper territories of oil-field proportions.

I'm an environmentalist (cloth diapering, remember?), so I'd rather not deal with oil fields at all, thank you very much.

My favorite room in the house: the smallest room, and, therefore, the easiest to pick up and keep clean.

Except the days after bath night. (Who actually has bath night every night? How on earth do you do that?)

I walk into the bathroom those days only to find freshly-bathed dinosaurs and underground boats staring up at me, kindly cushioned by an artful arrangement of damp towels. I stuff the toys back into the bathroom closet, on their loosely-assigned shelf. (Husband: “Where do these go?” Me: “Here,” pointing to closed door of cabinet hiding shelves that were neatly-arranged at one point, I swear.)

Then I drop the towels into the hamper to “deal with later” (see: Zone 2) because, believe me, that later will come sooner than I think. Dr. Seuss knew: “How did I get so late so soon?” But I digress.

While some might maintain that children thrive in this environment, I am talking about myself.

For the first few hours of the day, my face remains unwashed and my hair stays uncombed, if loosely-coifed. I twist it into a bun before bed — most mornings, I get up with what might be called a “my 3-year-old daughter is my hairdresser” bun. (I have no daughter.)

Now, if the nightly twisting of the hair immediately follows a shower, I am all set to wake up with a vaguely-appealing messy bun (see rare displays on my Instagram feed).

There is no way to avoid this one. It holds the coffee.

So, after not washing my face, I move into the kitchen. I can immediately see, thanks to the energy-saving light bulb left on at night for wandering toddlers, that not only did I not clean the kitchen after dinner, but I also left the dining table set. And by “set” I mean, “table was set for dinner, dinner was eaten, fire alarm went off, folks left.” I am not proud to say that this scenery includes the food-scrap landscape that is the floor under the table.

The table, by the way, is small and in no way far away enough from the kitchen to justify any of this occurring.

I quickly and habitually avert my eyes, because what I first need is...

Since I insist on keeping the grounds in the fridge for freshness, I add a few extra steps to this routine every morning — although, in truth, our kitchen is not big enough for that to have an impact of sore-muscle proportions.

But I haven't had my coffee yet, so anything goes in the silent complaints department. Silent, please, for I try my best to avoid tripping on toys or making any other sound. I take it you are familiar with the Let's not let her have a single moment alone sixth sense that wakes up the kids the minute you get out of bed?

(Check out Babble's Instagram feed: I just learned to camouflage the sound of my getting a snack I'd rather not share by turning on the faucet.)

So, coffee. Which I usually get to enjoy about an hour after it's made and the machine has shut itself off.

Feed the family first. Pack lunch. Try, in vain, to clean up the kitchen so I don't have to look at it when I finally do sit down with my coffee. Which I will after I inevitably end up change diapers at the most inopportune of times.

For a couple of mornings, I attempted to get into the habit of changing those night diapers right as the boys get up, but… it just didn't last. “Have discipline now or regret later.” Yes.

By the time all mouths are fed and out the door goes he who has somewhere to escape from all this, I summon up that aforementioned discipline — but not, as you might think, to do any sort of cleaning or picking up.

No, by now, I have trained my eyes to overlook toys on the floor and honed the tunnel vision that leads me from the coffee machine to the floor in front of the fireplace. My back to the kitchen table next to it so I don't see the Cheerios scattered underneath (see: Zone 5). Focus, mind you. It's finally coffee time.

Much later, when the caffeine has finally kicked in, I get up to rinse, pick up, put away, and fold —and all that sometimes for five whole minutes at a time, uninterrupted.

Eventually, the trained vision always loses focus on the narrow tunnel and takes in the Cheerios again. The Playmobil fireman hat, the Playmobil firetruck hose, the single Matchbox car.

A Matchbox car is never, ever found alone — they always drive in a convoy.

All this being said, I absolutely love being home with my kids.

While I rarely sit down and read, I always could, theoretically, just make more coffee and plop down with my knitting.

And all you parents with kids in school, I can only turn a fearful big eye toward those mornings when I'll have to be somewhere at a certain time, with another lunch packed and a dressed child.

If you like this article, please share it! Your clicks keep us alive!
Tags
Cars
toys
motherhood
messes
Kids
stay at home mom
SAHM