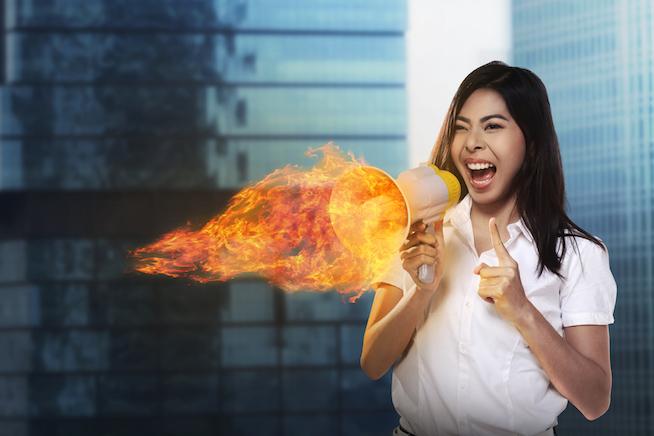 Saying whatever you want with the expectation that you’ll be corrected if you say something inappropriate is not a practice to live by.

I invite you to become feminist allies instead of continuing to selfishly throw all minorities under the bus in order to protect your fragile little male egos and incorrect sense of self-entitlement. If our interactions are any indication, I suspect that you see me as an overly emotional “feminazi bitch” who takes things too seriously. Let me tell you why you’re utterly wrong (and maybe assholes, too).

You don’t get to decide what offends me.

When one of you decided that it made sense to ask me what my ethnicity was before asking me my name, what I did at the company, or who I was at all, and I told you this question was inappropriate, it is not your place to step in to announce that you don’t think that’s an offensive question. You probably don’t think it’s offensive because as a cisgender, heterosexual, White male you can probably count on one hand how many times someone has decided to cut you down to a skin color and tried to make that your identity without your consent. You probably have never been made to feel uncomfortable when pressured to reveal your ethnic background nor treated differently once you ended up revealing it. You do not get to decide what I, a non-White woman is offended by.

No, I am not overly sensitive about race because I wasn’t born here.

The fact that you think my empathy derives solely from my country of origin is illogical. The fact that you think those born in this country (or countries like it) are more open and less sensitive is White privileged bullshit that claims that western countries are better off than those poor unfortunate countries that aren’t Canada, Britain, or the United States. To hell with that sort of ignorance, please. And to hell with your assumption that to be a socially conscious person you have to be born and/or raised in a non-western country, instead of just being a decent human being who is aware of the different plights of people.

My race, sexual preference, and other “conversation starters” are none of your business.

No, White boy, minority groups are not just waiting to be asked about personal things like their gender, sexual orientation, or country of origin. You are not providing some “safe space,” nor are you showing them that you’re OK with their differences just because you ambush them with inappropriate questions. If they want to talk to you about their personal business, they will talk to you when they are ready. You do not get to decide when they should open up about personal things that they may not even have come to terms with themselves. You are not some sort of social justice savior put on this earth to let us hapless minorities find sanctuary in your White privileged “openness.” You are more often than not the problem and you need to start acknowledging this proven fact.

It is not up to others to educate you.

You may think that because you say you love all humankind doesn’t mean you don’t have to watch what you say, and that people will tell you if you’ve said something offensive. That is lazy-ass, selfish bullshit. It is not the sole responsibility of the people around you to fill in all your gaps in knowledge. Saying whatever you want with the expectation that you’ll be corrected if you say something inappropriate is not a practice to live by. It’s especially not appropriate when the Internet and libraries are full of books, articles, movies, and firsthand accounts of things that can hurt people. Educate yourself instead of waiting to be chewed out by a person who has had enough of your White privilege (to which you will likely react by perpetually trying to defend your inappropriateness rather than accepting your error and actually learning from it like you claim to do).

It’s not difficult being a decent human being. Dear cisgender, heterosexual, White men in my life: All it takes is getting your head out of your ass and actually listening to what those who have actually experiences oppression have to say. Until then, I’ll continue to use you as examples of how not to be an asshole.

A Non-White, Feminist Woman Who’s Had Enough Of Your Shit.

If you like this article, please share it! Your clicks keep us alive!
Tags
cisgender
White Men
heterosexual white men
feminism