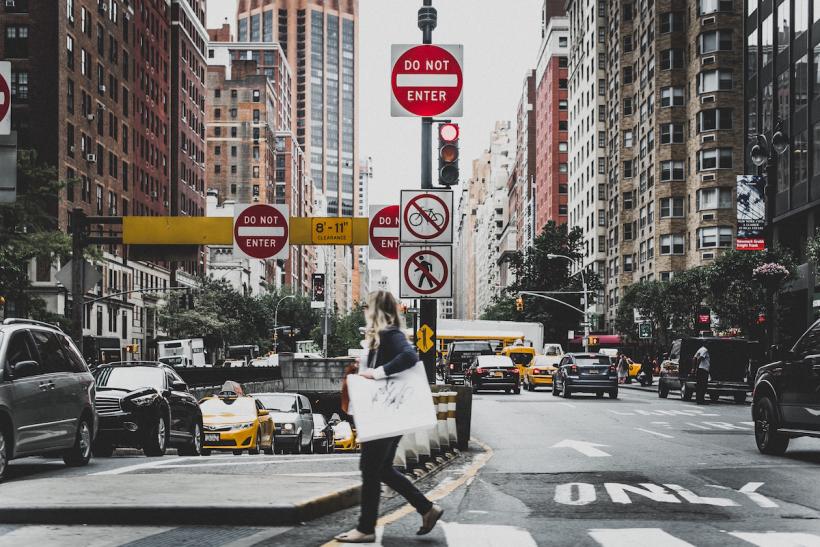 I keep going, one foot defiantly placed in front of the other. Image: Adrian Williams.

Run-of-the-mill street harassment isn’t going to stand between me and my medium #4 with an Iced Tea. I have priorities.

I’m walking to my favorite local restaurant to meet a friend for lunch, music playing from only one of the earbuds firmly secured in my ears. I’ve kept the busted pair and now favor it over new ones, as they allow me to hear cars and sirens and other pedestrians.

It’s slightly windy, but not cold enough to cut through my leather jacket and hood. My head is down, my hands are in my pockets, and I’m focused on the far-too-large-yet-surprisingly-affordable bowl of pho I’m about to devour.

While passing two men smoking and loitering on a stoop, one of them says, “Why don’t you smile more, sweetheart?” He then glances at his friend.

The friend yells, “You’d be prettier if you smiled!”

I keep going, one foot defiantly placed in front of the other. Run-of-the-mill street harassment isn’t going to stand between me and my medium #4 with an Iced Tea. I have priorities.

But if I did have the time, and found those two particular men to be worth it, I would have told them that there are many reasons why I’m not smiling — not when I’m walking down the street, not when I’m driving my car, not even when I’m in the comfort of my home:

1. I’m not smiling because it’s 2016, and women still have to fight for the right to obtain affordable birth control.

The Supreme Court recently heard the case Zubik v Burwell, which challenged the requirement that group health plans provide a full range of contraceptive coverage to women. If the Supreme Court refuses to uphold the law, an employer can use their religious beliefs to deny comprehensive health coverage that covers birth control to female employers.

If the court is tied and unable to render a decision, the case will be reviewed for a second time after a new Supreme Court Justice has been appointed. Once again, the reproductive rights of women across the country will be up to the decisions of an old, white man.

2. I’m not smiling because women’s rights to safe and affordable abortions are slipping away one disgusting piece of legislation at a time.

As of this writing, 83% of Michigan counties have no access to abortion providers. In Texas, after several abortion clinics were closed down due to viciously imposed and unnecessary regulations, 100,000 women have tried to self-induce abortions. When 92 new abortion restrictions were enacted in 2011, Google searches for how to methods to self-induce an abortion (or how to have a miscarriage) rose by 40%.

People are dying, all because a group of individuals are hell-bent on inserting their religious beliefs into every American uterus.

3. I’m not smiling because it’s legal for police departments to incinerate rape kits before the statute of limitations has passed — including my own.

When I reported my rape to the authorities, I was told there wasn’t anything the detective could do. After an invasive rape kit and countless questions that forced me to re-live the trauma, I was unable to bring any legal action against my abuser.

Now, as rape culture continues to plague and degrade our society and the women who live in it, 1 out of every 6 women will be the victim of an attempted or completed rape. And still, no one believes us.

4. I’m not smiling because I have to dress myself down to be taken seriously in a work environment.

While men are encouraged to enhance their appearance in order to be seen as intelligent, reliable and strong, I am told to dress in conservative clothes with minimal makeup — to avoid any potential signals I may or may not be sending. I must hide my femininity in order to appear knowledgeable and trustworthy.

I have to cover up the fact that I’m a mother, simply so that I can be seen as a writer rather than “just” a stay-at-home mom who sometimes writes.

5. I’m not smiling because the United States is the only industrialized nation that refuses to offer paid family leave.

As a result, parents across the country are forced to return to work sooner than should ever be expected or required of them. Mothers are putting themselves and their postpartum bodies in danger, all because they aren’t granted the appropriate amount of time to heal after labor and delivery.

No one should have to be forced to choose between a steady paycheck and a healthy pregnancy.

6. I’m not smiling because when I’m working, people ask me if I miss my son.

No one seems to ask his father that question. People insist on constantly inquiring as to whether or not I’m trying to “have it all” — as if my existence cannot be as complicated, multifaceted, and fulfilled as my partner's.

Instead, I am expected to choose between a successful career and a happy child. I have to decide if I’m going to be a reliable employee or a reliable mother, because clearly, I am incapable of ever being both.

There are so many reasons why I and countless other women walking down countless sidewalks aren’t smiling.

Our rights are still being violated, still being stripped from us, and still being fed to presidential candidates as topics for the latest debate.  We’re against fighting gender inequality, sexism, racism, homo- and transphobia, income inequality, gender stereotypes, domestic abuse, and the constant threat of rape.

I stop for a moment and look behind me. The two loitering men are taking another drag off their cigarettes and preparing to harass two more women who, like me, are walking with their heads down and their eyes forward.

I want to backtrack and educate them. I want to scold them and implore them to be better.

Instead, I turn up my music and drown out the difficulties of being a woman. I look forward to lunch and good conversation... and the day that it’ll all be better.

I Shouldn't Have To Be Your Mother, Sister, Or Wife To Be Respected Online
Danielle Campoamor

My Pain Didn't Matter — Because I'm A Woman
Danielle Campoamor