Joining A Gym Made Me Realize I'm Failing At Feminism 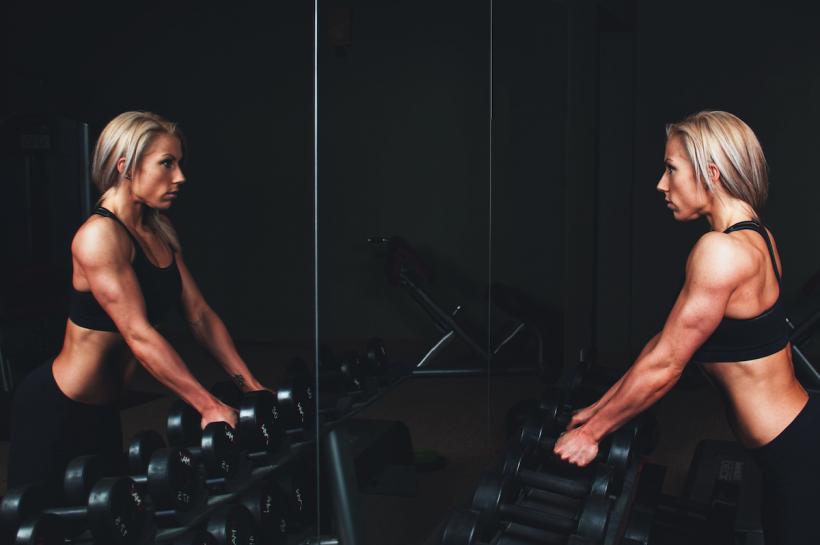 Even when I make a conscious effort not to apologize for my mere presence as a woman, it's incredibly difficult to avoid. Image: Scott Webb/Pexels.

I continually struggle to come to terms with the ideals driving me to work out in the first place.

Last night at the gym, I pulled two benches together to perform what I like to call “The Sumo Squat.”

This involves doing a deep, wide-stance squat, thrusting my ass far out into the air while standing between the two benches and holding a heavy weight.

Essentially, there's no way to be discreet about it.

I'm always a bit terrified to do this move at the gym, worried someone might see me and think I was trying, absurdly, to become Instagram’s next butt model.

In-between my sets of squats, I alternated with some dead lifts. I noticed that two guys were hanging around awkwardly, shooting dirty looks my way. They were trying to make do lifting their 100-pound dumbbells with the only remaining bench in the gym and it was obvious that they wanted my bench to complete their workouts.

And I kid you not, my first instinct was to panic and think, Oh no! They must need this bench; I'd better hurry up! Or maybe I should just give it to them?!

Immediately nervous and sweating (even more so than I already was), I felt overcome with guilt that I was taking up physical space. I realized, with a rush of horror, that deep down, I didn't feel entitled to it.

My initial gut reaction was that they deserved that bench more than I did, even though I was literally standing on top of it, because they were men and I was a woman.

And more than just a woman — a freaking mother.

What was I doing pretending I knew what I was doing in the gym? It was such a silly, foolish realization that I felt like I was inconveniencing them by doing my silly-little-girl workout, while the real men had to wait for the bench.

Luckily, my brain caught up to my socially-conditioned shame, and I dissuaded myself from saying anything. And it was at that moment, while I pep-talked myself in the mirror as I finished my deep sumo squat, back rolls on full display, that I realized that my feminism needed a lot of work.

For the first time in my life, I realized how much time I’ve spent tip-toeing around what I have inherently felt was a “man's world”: from the gym to simply walking down the street knowing my body would be judged.

Stepping into a gym, a gym which is very small and focused almost exclusively on the “meathead” type of cis men who lift, has forced me to step out of my comfort zone. It's also made me realize how small the comfort zone I'd constructed for myself really was.

I fight the urge to explain that I only have a few reps left if one of them plants himself angrily next to me, sighing loudly when I dare use the machine upon his biceps so desperately depend.

Did men do this to me or did I do this to myself? Who decided — somewhere between the age my breast buds started to sprout and the time that breastfeeding four kids reshaped them just as radically — that my worth lay shackled beneath my sports bra?

Even when I make a conscious effort not to apologize for my mere presence as a woman, it's incredibly difficult to avoid. It's my knee-jerk reaction to apologize if I happen to be using a machine that a man wants, and I don't even know why.

I nervously glance around and watch the men using the bench or the machine, never daring to take it unless he is clearly done with his sets.

I fight the urge to explain that I only have a few reps left if one of them plants himself angrily next to me, sighing loudly when I dare to use the machine upon which his biceps so desperately depend.

I walk into the gym and immediately scan the joint to decide if it will be a “safe” day to let my stomach rolls roam free as I grunt and sweat, or if I will have to make an effort to tuck them into my pants like some squishy stolen ketchup packets from McDonald's.

I continually struggle to come to terms with the ideals driving me to work out in the first place.

Is it really for “myself” (like I proclaim in my head), or is it because, deep down, it's virtually impossible to escape the idea that I need to look a certain way to be desirable?

Or is it that being desirable to men is my #1 priority in life to begin with?

Do I squat because I love the strength that I feel in my quivering quads when I thrust those 45-pound plates into the air? Or do I do it because I too have fallen prey to the rise of the bigger-is-better in the butt wars (because it's damn sexy)?

Every time I worry that I smell bad, that my tampon wrapper might offend if it falls out of my gym bag, or that my sweat marks are too unseemly, I can't help feeling like I am failing at feminism.

Because, holy hell, if there's one thing that cis men don't give a second thought to in the gym, it's how they smell or how offensive their bodily excretions are, you know?

The point is, I've always thought of myself as a feminist, and I would wager that many women who are hard-hitting gym rats would say the same.

But even for feminists, it can be hard to overcome the idea that the weight room, like so many spaces, is first and foremost a man's world.

No matter how much our brightly-colored, overpriced leggings may try to stake a claim to it.

If you like this article, please share it! Your clicks keep us alive!
Tags
Gym
exercise
working out
women
men
gender
fatphobia
sexism
feminism
internalized sexism