Lessons The Worst Hookup Of My Life Taught Me About Relationships 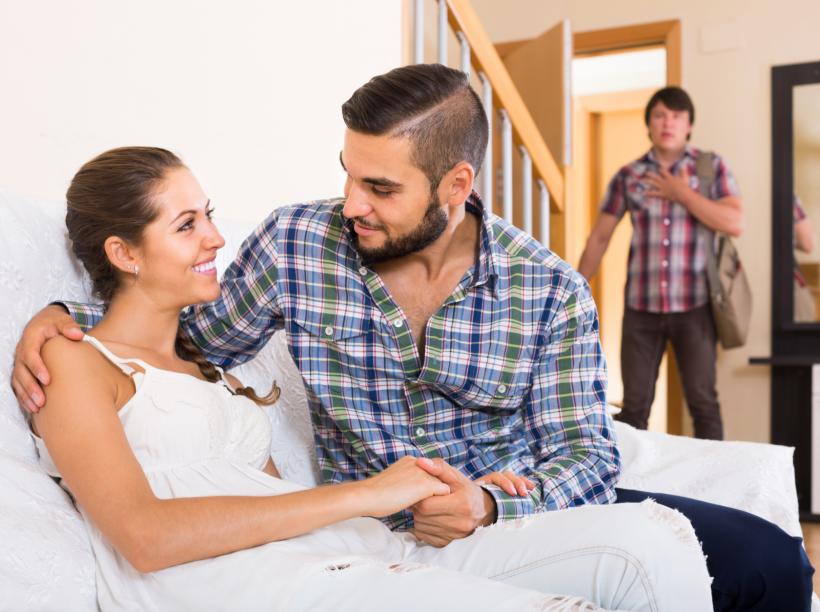 I heard the unmistakable sound of the front door unlocking.

Oh no, I thought. Did my dick just ruin a family?

I've always felt that we learn a lot more from our mistakes than from our triumphs. Although, admittedly, this might just be me trying to rationalize the bad decisions I’ve made.

I’ve often described my approach to life as “fucking up in the right direction,” trying to pull life lessons from my blunders in order to make them sting a bit less. Some nights, you have to pull an epiphany from your worst choices — the alternative being taking a long, hard look at your life.

Like many of my bad decisions, this story begins with me on a date from OKCupid.

In early 2014, I went out with a very attractive woman in her early 30s. We’ll call her Debra, because that sounds like a very “early 30s” name to me, someone who's embracing the new decade by casting “Debbie” aside.

We made small talk on opposite sides of a dimly-lit table at the back of a cocktail bar, laughed with each other, got uncomfortably drunk on alcohol that tasted like Sour Patch Kids, made out to the point where we could hear the uncomfortable sighs of those around us, and stumbled into a taxi that took us back to her place.

As we sat in the back of the yellow cab, I watched her avoid my gaze, a worried look washing over her face.

When I asked her if anything was wrong, she admitted, shyly, “I need to tell you something.”

When faced with an obviously stupid decision, I’ve often found that I’m given three opportunities to get the hell out of dodge — three strikes.

This was strike one.

Debra told me about her failed marriage, how the guy was all moved out and how this was the first date she’d been on since the split not too long ago. With how she spoke about the situation, I knew it was still a sensitive issue.

I should’ve left, but it was 2 AM and I was drunk in an unfamiliar neighborhood in Queens. Debra wanted to measure the angle of my dangle, and at 21, I didn’t have it in me to say no.

We had sex. It was pretty rad.

At around 7 AM, I woke up with a hangover so intense, scientists should document it for future generations. I got up to use the bathroom. Walking down the hall, I passed an open door to a room that had been too dark to see inside the night before.

The room was bright pink with two empty child-sized beds on either side. There were dolls everywhere, and the walls were adorned with crayon drawings of a happy family of four.

Oh no, I thought. Did my dick just ruin a family?

I walked back to the room and got back into bed, still too hung-over to try to figure out a way home. I lay in bed as Debra slept, rapid-fire interrogating myself about the moral ramifications of doing the horizontal monster mash with someone who was still married.

Was I just a rebound? Was I some kind of revenge on this guy? Was it all my fault, for agreeing to it?

I didn’t know how I could feel worse — and then, through the paper-thin walls, I heard the unmistakable sound of the front door unlocking.

I quickly scrambled to find my clothes, but the bedroom was in total disarray. I considered just climbing out the window with whatever clothes I could find. Ultimately, I decided that I just didn’t have the strength to sneak out of someone’s house without pants AGAIN (that’s another story for another time).

I nudged Debra awake, pulled the blanket over my naked lower half, and prayed that the boats going across the river Styx had extra legroom.

A man stood in the doorway, looking at us silently, hurt written all over his face.

“What the hell do you want, Steven?” (Steven also feels like an early 30s name.)

“I came back to grab my Eagles collection —” no bullshit; I bet that’s why they broke up — “and I see you fucking this guy?”

Do you remember that incredibly awkward feeling you’d get during childhood when you went over to a friend’s house for dinner and their parents started arguing?

This was like that — only your dick is out and you got caught having sex with one of the parents.

The two continued to argue back and forth for about 15 minutes, completely ignoring me the entire time. Not that I’m complaining — I wanted to draw as much attention away from myself as possible as I planned my elaborate Shawshank Redemption-esque escape plan.

But as the argument went on, I began to notice a change in the tone between them.

What started out as pure anger and resentment for one another slowly melted into them opening up about their hurt feelings. His insecurities, her need to be seen as “desirable” — they laid out all of the things about themselves they knew had to be addressed.

Somehow, I ended up sitting there, pantsless, as a woman (to whom I had very recently given a lift to the Bone Zone) worked out her differences with her husband and rekindled their relationship.

Maybe my dick doesn’t ruin families, I thought. Maybe it brings them together.

They ended up cry and hugging each other. I took the opportunity to grab whatever clothes I could find and make myself scarce.

As I walked out of Debra’s place with lopsided bed-head and wearing my v-neck and a pair of her sweats, I contemplated the enormous shift I'd just witnessed in how the two addressed each another. Still relatively new to the dating world, I’d never seen something like that in my life.

They taught me some important lessons that day.

During moments of disagreement, especially with people we love, we can easily become adversarial. We end up obsessed with being right, rather than about actually resolving whatever issues are plaguing our relationships.

When the two started to put their cards on the table and open up about what bothered them, that marked an important transition in the purpose of the discussion. It wasn’t about who was “right” anymore. Instead, it was about salvaging the relationship.

They weren’t fighting because they were divorcing — they were fighting to be together.

I’ve thought about that day a lot whenever I have a disagreement with someone. I don’t like confrontation, so when I find myself in a heated argument, I think about why we’re fighting.

If we’re both just trying to be right, I walk away.

They taught me that, sometimes, you need to let go of your pride if you want to preserve the things you’ve built with someone.

They also taught me, y’know, don’t have sex with married people (if both partners aren't into that).

But that’s another lesson entirely.