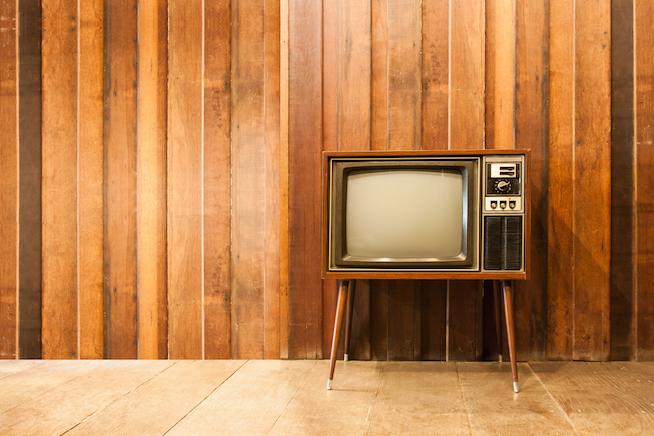 For the record, wood panelling is not part of this resolution AT ALL.

Our culture has a lot to say about our addiction to digital media, but very little about the obsessive shame we’ve attached to that digital media.

I spent last night gleefully watching both volumes of Kill Bill, one right after the other. That adds up to about 248 minutes of screen time, not counting rewinding the Beatrix and Elle Driver fight scene until I’m pretty sure I could snatch out someone’s eyeball myself, given the chance.

In the past, I would have kept this marathon to myself, mostly to avoid a reaction I think all of us encounter when divulging our TV habits to others:

“I wish I had the time to watch TV like that.”

This comment gets tossed at just about any and every pastime imaginable, but TV gets the “Wish I Had That Much Time On My Hands” treatment more than all the others combined. It’s also the one I feel most guilty about, which is why this year I’ve made a resolution to watch more of it. Technically, the resolution is “Be more intentional with my media consumption,” which sounds a lot more elegant than “Watch Season 3 of Bob’s Burgers for the fourth time.”

I do not personally find TV to be a waste of my time. I really engage with what I watch, and watching television feels just as instructive to my writing as reading, if only in a different way. I also just really like to watch TV. I don’t see any of this as a “bad habit” I need to cut out of my life. What I do find to be a huge waste of my time, though, is the guilt I’ve constructed around watching anything that plays across the screen.

Our culture has a lot to say about our addiction to digital media, but very little about the obsessive shame we’ve attached to that digital media. Whenever we talk about the TV we watch, we qualify it in the same way we do food. “I’ve been so bad, I can’t believe I watched a whole season of Orange is the New Black over the weekend.” And just like with food, most of the people who talk about TV like that are women.

When was the last time you heard a man publicly scold himself for his Justified marathon? Probably around the last time you heard him tell all his friends about how “good” he needed to be this week after eating that slice of cheesecake. Answer: Literally Almost Never Except For The #NotAllMen Guy Who Will Probably Email Me About This. Men know how to take pleasure in pleasurable activities. They don’t need to negotiate the food they eat or the TV they watch because it’s been established that men don’t owe the world an explanation for the way they spend their time. Women are still working on that, and I think TV is a pretty nice place to start.

Here’s the thing: We all have the same amount of time. We can all spend that time however the fuck we please. We can cook, sew, learn French, practice origami, or watch an entire season of Lost in one weekend. We can do all of those things, actually. Everybody has Big Responsibilities, like jobs or kids or spouses or really high-maintenance cats, but another one of those big responsibilities is taking care of yourself. That includes doing things you enjoy, and a lot of people enjoy watching TV, myself being one of them. And I don’t have enough time to feel bad about that. I’m a busy woman, and I’m only on season 2 of The West Wing. I have a lot of work to do.

If you like this article, please share it! Your clicks keep us alive!
Tags
New Year
new years
New Years resolutions
resolutions
TV