Sexual Assault On Campus: We Believe You 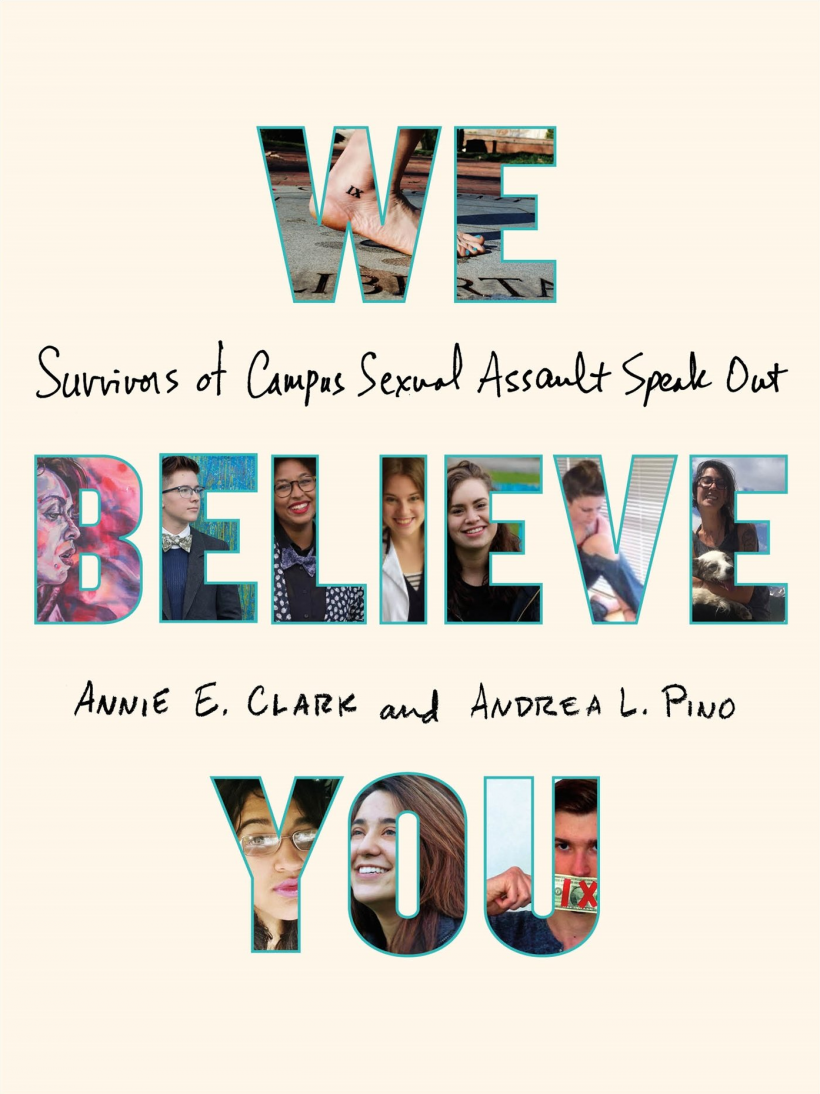 Twenty percent of women and 5% percent of men will be sexually assaulted while attending college. Image: Holt McDougal.

It's tough enough for cis, white, hetero women — for women of color, queer and trans survivors, it's even more deadly.

The Hunting Ground, a 2015 documentary examining rape on college campuses, begins with scenes of ecstatic high school seniors getting into the colleges of their choice.

These clips grimly foreshadow the horrific experience that they will encounter when they join the ranks of the 20% of women and 5% percent of men who will be sexually assaulted while attending college.

April is Sexual Assault Awareness Month, but for those whose lives dramatically changed when they entered the realm of rape survivor, there is no 30-day expiration date.

This is made abundantly clear by Annie E. Clark and Andrea Pino, the co-founders of End Rape on Campus (EROC). They also have edited the book, “We Believe You: Survivors of Campus Sexual Assault Speak Out.” It is a stunning and heart-wrenching anthology of survivor essays combined with information, rights and resources, an explanation of Title IX, and “Help 101.” (The EROC website has extensive information as well, including direct support services.)

It should be read by parents, high-school seniors, college personnel, and law-enforcement (both police and prosecutors). It needs to be placed in college and university bookstores, including those schools featured as being on the wrong side of this public epidemic.

(Yes, there is a very extensive list of universities and colleges which have been under “federal investigation for possible Title IX violations as of December 31, 2015.” Expect to see names including Boston University, Sarah Lawrence, Princeton, and the University of California-Berkeley.)

Clark and Pino were front and center at the April 26 bipartisan press conference held to bring the Campus Accountability and Safety Act (CASA) (S.590) to the attention of the country. The core mission of CASA is to ensure protection for students, and to systemize response and reporting protocols across the board. Sen Chuck Grassley (R-IA) pointed to the proposed legislation as a “balanced bipartisan package.” He referenced the presence of Clark and Pino, noting, “Their activism was critical.”

Speaking about her 10-year journey originating from the time she was raped, Clark said, “I went to my university for help and I was blamed.” She added that the observation that sexual assault on campus was “a microcosm of the larger picture.”

Pino addressed the importance of the role of “confidential advisor” in the implementation of the bill. “It will give students someone to talk to… to give options, help with decisions, resources, and autonomy,” she said.

Both women, as well as other survivors in attendance, were repeatedly thanked by the Senators for their presence. Joni Ernst (R-IA) discussed the importance of the legislation, stating, “It’s about doing what’s right.” Lindsey Graham (R-SC) commented, “We should do this this year.”

Senator Claire McCaskill (D-MO) and Senator Kirsten Gillibrand (D-NY), both previously active in dealing with rape in the military, have spearheaded the efforts to get traction on this issue. McCaskill cited a survey undertaken in 2014 to establish a “baseline.”

It found that over 40% of schools hadn’t investigated rape allegations in five years, with one in five colleges reporting more assaults than investigations.

Thirty-three percent of schools had inadequate training in due process and transparency, with 73% having no in-place protocol between their campuses and law enforcement. McCaskill wants to see a “fair” environment created. “I don’t want to lose momentum. Let’s get over the finish line,” she asserted.

“This is a victim-led movement,” Gillibrand acknowledged. “They spoke truth to power. They were not going away. The result was they were instrumental in helping to write a bill addressing what happened to them.”

She underscored that there needed to be “basic training for all who adjudicate cases.” In response to a question about the rights of defendants, Gillibrand was clear about advocating for parallel treatment of both the victims and those accused. (Rates of false sexual assault claims are 2 to 8%.)

The consensus from the senators was to get the bill “floor time,” so that it could be given an “up or down vote.” The bill seeks to redress existing failings and lack of accountability. A standard for “minimum training” would be put into play, covering a clear understanding of what constitutes a crime. The designation of “confidential advisors” would be mandatory. Any sanctions for violations of the student conduct code (like underage drinking) would not be allowable. A national biennial survey would gather information and data on schools with pending cases. The results would be published by the Department of Education.

In a crucial move to unravel the knotty connections between the big business of college sports, student athletes, donors and alumni, a “uniform discipline process” would be introduced. This would prevent the circumvention of accusations — as in the past — when the “athletic department” was allowed to take control of complaints against student-athletes.

Finally, a more stringent enforcement of Title IX penalties for violations of the Clery Act would be enforced, sending a clear message to schools that rape on campus cannot be handled with impunity.

The nuts and bolts of making and passing laws in the Capitol is essential to achieving prosecutions. Yet the announcement felt miles away from the overwhelming immediacy of the We Believe You narratives.

Each story is difficult. The young woman, previously a virgin, sitting ignored in the ER with unstoppable bleeding — from a ripped cervix. The assailant who told his victim, “I’m done with you, you can leave now.” The rape in the middle of a road; the freshman who after his attack asked himself, “What happened?” Equally brutal was the gang rape of a woman who had been drugged and endured seven hours of repeated battering and violation.

Frequently, I thought back to 19-year-old Lizzy Seeberg, profiled in The Hunting Ground. She was unable to make her way back from the trauma of being assaulted by a Notre Dame football player and committed suicide.

We Believe You makes a concerted effort to illuminate a consciousness that is often passed over in the mainstream media. There is no “perfect survivor.” All stories are essential. The reporting process is a minefield (like the military) and frequently becomes a form of “revictimization” — a “secondary assault.”

It's tough enough for cis, white, hetero women — for women of color, queer and trans survivors, it's even more deadly.

Any person who's from a marginalized community may feel threatened by reaching out to school authorities or the police. Princess Harmony wrote in her essay, “Untouchable: Being a Trans Survivor,” that “without access to even the most basic service, such as a trans-competent sexual assault nurse examiner, you won’t get even an investigation into your rape.”

Over 30% of survivors develop “psychiatric disabilities.” The rate of PTSD among rape survivors is at a more elevated rate than for veterans who have been in combat. It’s not hard to understand how coping becomes overwhelming when “counselors” victim blame with comments and questions such as, “What were you wearing? Did you say no? Why aren’t you over this? Are you really sure that happened?”

There is a definite disconnect between what serves to support the victim and the agenda of the institution seeking to protect its prestige, fundraising, low crime stats, and sports stars. Professors who have been vocal in championing the needs of rape survivors have quickly found themselves ostracized by their administrators.

Clark and Pino advocate for better instruction on what constitutes healthy relationships, along with a well-defined picture of what consent means (from a local to a national level).

Students need to be prepared before they get on campus and face The Red Zone, the precarious period from orientation to Thanksgiving break.

In the words of Clark and Pino:

“Believing survivors is a type of

radical everyday activism, since we live in a

society that suggests that you do

Ravishly is concerned about sexual assault on campus.

Help us spread the word with this Twitter giveaway!
Retweet this article with the hashtag #EndCampusRape and we will randomly select a winner.

If you like this article, please share it! Your clicks keep us alive!
Tags
Sexual Assault
Rape
we believe you
rape on college campuses