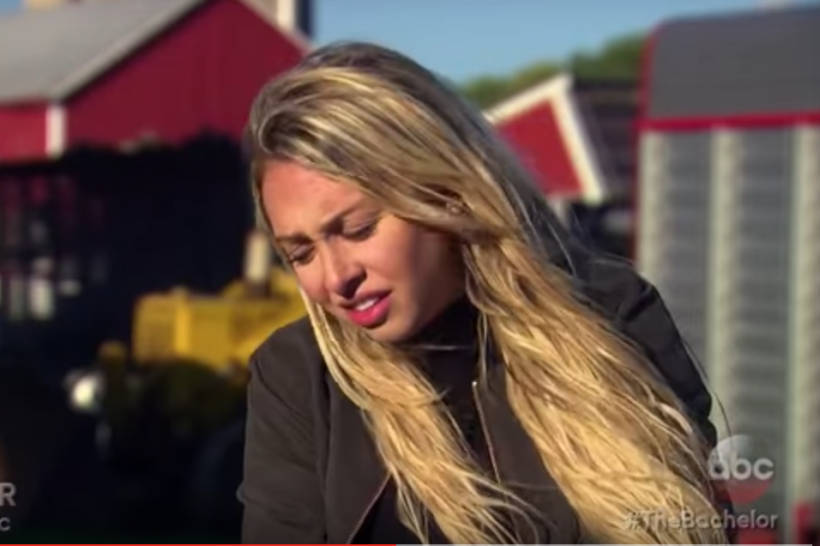 Based On Her Persona, If Corinne Were A Man, She'd Be The Next POTUS

Corinne is our perfect Trump-era queen, veering as she does between egotism and insecurity. Spewing uncensored emotion. Massaging inflated facts. Bragging about sexual conquest.

When a man parades these traits on television, he's elected president. When a woman does the same, she's deemed unfit to get married. To Nick. Even though we still don't know if getting engaged to him requires anything more complex than enhanced cleavage and zero confrontation.

Corinne has refused adulthood. She basks in immaturity, and if you saw episode four of The Bachelor, you know she finds grabbing her own décolletage ample proof that she's mature enough to marry.

The man-child has long been a fixture of contemporary culture (see: Chad-Bear, The Hangover franchise, Tom Hanks, your list of exes and of course, the current pres).

But the woman-child is far less popular. While the man-child is considered to have achieved some kind of authenticity, the woman-child is an object of scorn. And interrogation. All the other women decide it's time to confront Corinne about all her enormous flaws: naps, rule-breaking, bouncy house straddling and having a "highly inflated view of herself."

Even worse, she's deemed to be thwarting The Right Reasons. Which exist as a mythic Bachelor Nation "constitution" that in actuality burned to ash in some group date bonfire seasons ago.

The Wrong Reasons Rule The Bachelor

The Wrong Reasons are why we watch everything. Why we always tune in for Alternative Facts, or what was previously known as reality television.

The Bachelor is just a giant referendum on what it means to be "wife material." And many of us, like the 3.2 million pink-hatted marchers, give exactly zero f*cks about being wife material or learning how to be a "good woman." We totally reject it. We're trying to figure out how to burn the house down. Metaphorically.

Our main question is: "Which of these bachelorette chicks marched?" Did Nick? Or is he really some kind of Quantico spy now? Does he shill for the Russians or is he a nice, trustable guy?

The Bachelor has always had a subversive underbelly. The show's radical move is to constantly undermine marriage, to treat the institution as a grand joke while it pretends to esteem it.

The show acts like it wants to make marriage great again, but if you caught any glimpses of Ben and Lauren's spin-off reality show (filmed pre-breakup), it made relationships look like a series of tense manipulations over the smallest of things.

The Bachelor paints dating itself as a collectively experienced hellscape, where the best case scenario is not a rose, but avoiding humiliation.

Then she had to endure being asked: "What are your flaws?"

Danielle offered a deft deflection by lobbing over details about her parents' romantic divorce — her dad would carry her mom to bed.

Nick listened with what at times appeared genuine emotion. But then, he also seems to think he's progressive because he wants women to wear sweat pants — to the grocery store! Thanks, Caveman.

So Wisconsin bled red this last election and all we could wonder when the plaid-shirted farm emcees marched up to guide the group date was: "Did those guys vote for Trump?" Luckily (?), these same men didn't get to "choose" a date winner. There was no farm-cathalon wherein whoever shoveled the most fecal debris or milked cows the fastest got to kiss Nick.

The farm date was another chance for Corinne to rebel. She squeezed herself through barn railings and headed for respite by a haystack.

Who could blame her?

The other women cling to the notion that hard and fast rules prevent Corinne from recusing herself from group dates.

But we all know the producers love it when anyone veers off script.

There was an apt surrealism to the images of Nick holding giant baby bottles. Presumably, they were meant for the cows, but you almost expected Corinne to grab one and curl up in a manger somewhere. These scenes were all about nostalgia and America's love affair with farm life. Consider Chris Soules or last season's Luke who turned hay bales into DIY sofas.

The Bachelor tries to make rural Wisconsin look like Xanadu, but we can all tell it's awful. Astrid doesn't openly complain; she just pulls her scarf across her face as if the barn is strewn with zombie corpses.

Jaimi was not the only woman to notice that Nick didn't seem all that skilled at fiddling with cow nipples, which brought about a disturbing comparison between animals and women that seemed far too in tune with Bachelor logic. Cameras lingered grotesquely and shamelessly (of course) on cow anatomy and its excretions.

The group dates are always scary. One never knows what horrifying embarrassment awaits. Past group dates have included sumo wrestling, tractor racing, and a bunch of stuff on stage: dancing, stand-up comedy, rap. Just, you know, your worst nightmares.

And you're usually asked to undress in some way.

In contrast, these women had to "gear up" in rubber boots and industrial gloves. There was no prophylactic strong enough to protect from the foul smells. Farms apparently have troughs of fecal matter that require constant stirring with shovels.

The Pure Roots of Hometown Dates

Raven acts like some kind of ingénue from Arkansas, but she's really a ninja who will describe what is usually kept private in detail, and doesn't shirk from repurposing a stiletto for cheater butt-kicking. She obviously needs her own spin-off action series where she busts the asses of men who step out. The fact that Nick is basically elaborating cheating on her gets swallowed up in the cavernous roller-rink/museum date space around her.

She somehow comes across as the virtuous heart of southern womanhood. Which was always gothic enough to be named after a Poe ballad and dressed up in a lacey witch costume and roller blades.

She's forced to hang out with Bella, Nick's little sis who is not allowed to watch the show because she is an actual real child. (What does that tell you?) Bella adds uncorrupted innocence to the franchise but needs shielding from Nick's endless sex-brags and Raven's description of a vagina in an explicit tale of rage, sex, and policing.

That Bella seems to like Nick is his best endorsement so far. Although, watching kids play soccer is not as exciting as the culture around it would claim. Worse for Nick's eventual wife is the promise of running into his exes all over Waukesha. Amber seems nice enough, but Mrs. Viall will also need to be satisfied with frequent trips to Skateland.
To be continued . . .

Last weekend millions upon millions of women (and allies) banded together against a singular male force. So it was a jarring switch to watch a collection of millennials fight each other over the bearded bachelor. Women have always been under attack. Always feared and policed. Surveilled and criticized. And the most painful part is when they do it to each other, cannibal-style.

We still seem to think that being "wife material" is some kind of achievement. Or that wearing sweats is a progressive move. Corinne ends up being hyper-retrograde and, weirdly, activist — in her childish way. As if Barbie-style is finally breaking. As if her inevitable, psychological implosion will blast away blindness. The fight is promised to continue next week.

"To be continued" is such the mode of the soap opera or news cycle.
Soap operas were supposed to mimic the tedium of the house wife's actual life. No endings or known beginnings. Just a series of cliffhangers that never really evolved — and that didn't attach to logic.

The Bachelor has long been our new soap. Each season recycles the key players who work through the same plot points. Nick's mom hopes this will be his last foray on The Bachelor. She weeps as she says it. Can her son finally get some lasting love?
Probably not, because the man seems primed for a televised life of grab-ass and roller skates.

If you like this article, please share it! Your clicks keep us alive!
Tags
The Bachelor
Corinne
Nick Viall
Wisconsin
hometown date