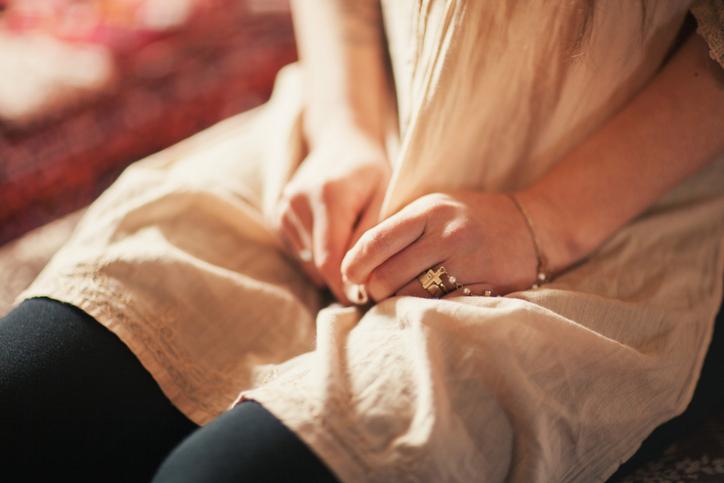 This is not a pretty story, but it is a true one.

I love the concept of the divine yoni: of the beautiful and powerful nature of femininity, of being a creator and life-giver, and of vaginas being the very source, origin and gateway of life. I love it. I do.

Can I relate, though? Oh, hell no. Don’t even get me started on my faulty plumbing. Or, actually, you know what? Do. Yeah. I’ve started, so let’s do this thing.

Two years ago, after enduring what I’d come to learn was my first miscarriage and my last pregnancy, I found out that all my reproductive insides were garbage. I was 32-years-old, and had two ovaries floating around in my body that contained roughly the same number of viable eggs that your mother-in-law has. That is to say, approximately none.

My baby-making years had escaped me almost entirely, and it took me every last hour of the ensuing two years to come to terms with that. The fact: the child I do have— who spent 40 weeks growing inside my body before flying out of me and tearing my divine yoni to shreds back in 2013 — is a walking miracle, and not, actually, somebody that I ever had any right to just because I’d had unprotected sex with her father roughly four thousand times over the course of one particular 48-hour fertile period. (Oh, you haven’t had to try incessantly to make a baby month after month? I don’t recommend it. It’s not exactly a blast.)

So there I was, infertile in my early 30s, having spent most of my 20s gallivanting around the planet like I owned the place, too often hungover from slinging a few too many shots the night before. Shots which I kept getting for free when my best friend would tell every unsuspecting male that today — yes, this very day! — was my birthday, so shouldn’t we both get a free drink? "Why, of course!" they’d always say.

And off my friend and I would go, drunkenly laughing our way into the night. (Um, I mean, what a joy it was to be spending three sentences with you, you lecherous 50-something stranger sidled up to a dingy bar at 11 p.m. on a Tuesday night! Bye, though! Thanks for the drinks!)

I’ll preface this by reminding you about that one child I gave birth to a few years ago: I had her free of pain medication. She was born into the water after I endured 14 hours of back labor... And these cysts? They were SO MUCH MORE PAINFUL THAN THAT.

Back to my vagina, though, because you haven’t heard the worst of it yet. So did you know that every vagina comes equipped with two glands, one on each side, called Bartholin glands? Well, neither did I until one of mine decided to revolt. I developed a cyst in this gland — not once, not twice, but FIVE times over the course of a few years, which on three occasions became so problematic that I had to march myself into my gynecologist’s office in order to have it… addressed. (Let’s put it that way.)

Oh, you want details? Details, then. Put your snack down for a sec because this is about to get horrifying.

I’ll preface this by reminding you about that one child I gave birth to a few years ago: I had her free of pain medication. She was born into the water after I endured 14 hours of back labor. So I have an idea of what pain feels like.

And these cysts? They were SO MUCH MORE PAINFUL THAN THAT.

So enter my blessed gynecologist, the co-owner of my nether-regions. (“This vagina? It’s our vagina,” I tell her.) She did what it took to provide me with relief, but not before inflicting so much pain on me that I willed the Goblin King to come and take me away. (He didn’t.) So she graciously endured the endless string of my most creative cuss words, which flew out of my mouth at warp speed. And when that didn’t cut it, I resorted to controlled screaming, yelling, and alas, quiet weeping while she cut me open, lanced my cyst and inserted a catheter into that homemade hole inside my body.

And that catheter would inevitably stay there for an entire month before being removed.

She performed this procedure on me TWICE, I must remind you. This. Happened. To. Me. Twice.

And would you love to know how many times that procedure worked, did its job, and kept the development of further cysts at bay?

Because I’m sitting here now, on bed rest, with a brand new homemade hole inside my body, having just three days ago been laid on a hospital bed, put under, and sliced into by a team of professionals who are confident that the third time’s the charm. No catheter this time, mind you, but I have more stitches sewn into my body than I care to count. So mark my words: one more upset and I’m having that god-forsaken gland ripped out of my body for good.

Am I a bit resentful? Yeah, kinda. (Quite a bit.) But am I completely relishing the non-stop Netflix streaming, being waited on hand and foot by my doting husband, and the copious amounts of red wine and Twix bars that keep lining the edge of my tub when I’m in the bath each night? Hell yes I am. My vagina’s not all bad, I swear. As a rule, I revere it, even.

It’s usually on my side — it’s just that we’re currently on some sort of unsanctioned break and I have half a mind to have it removed altogether. I could see myself looking great with some sort of Barbie-doll-crotch situation in place.

Can’t relate to any of this, dear reader? Thank your lucky stars. But if you ever find yourself in this situation, fret not; I’m awaiting you patiently with all the wine and frozen padsicles your blessed heart desires. You are not alone.

I believe in the divine yoni. I just don’t own one personally.

If you like this article, please share it! Your clicks keep us alive!
Tags
vagina
vaginal cysts
catheter
humor
infertility