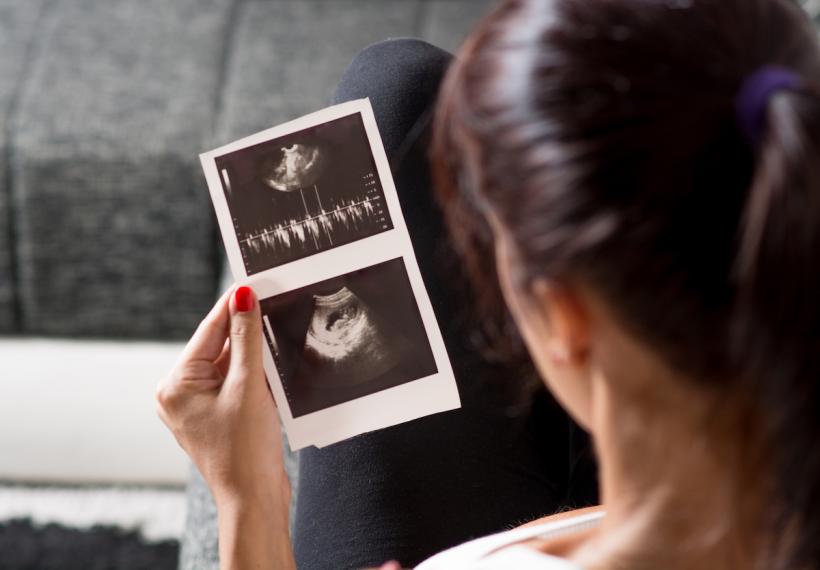 The moral of this story is that early ultrasounds can vary wildly and that you should probably not do what I did by obsessively Googling things.

In Navigating IVF, IVF Steph takes us on her journey through the wilds of fertility treatment.

I don’t remember when I had the first ultrasounds with my children. I know it was at my first OB appointment, and I know that always seemed like forever away from the time I found out that I was pregnant. I want to say most of mine occurred between eight to ten weeks. I do know that they never happened earlier than eight weeks.

I’m not sure if ALL IVF patients have an ultrasound as soon as I did. I don’t think they do. I have had a previous ectopic pregnancy, so I had an early ultrasound to verify that nothing was hanging out in my existing Fallopian tube or anything. I was incredibly worried about this, despite my betas being high and doubling regularly and all that jazz. This did not happen with my ectopic, and generally, poor doubling can be a sign of a less than healthy or inappropriately placed embryo, so good numbers were a great sign.

I was still terrified.

You may be wondering how you can even have an ectopic pregnancy with IVF. I certainly did. When we finally decided to move forward with IVF, I specifically said, “Well, at least I can’t have another ectopic!” to my provider. She was like, “Well, actually…” and everyone knows that nothing you want to hear follows those words.  When you have IVF, and they put the embryos in, they don’t instantly implant that second and can move around for awhile.

So ultrasounds. Because I’m high risk for an ectopic, I had one at six weeks. I came in, brought my kids, brought my husband, got in the stirrups, and prepared for today’s showing of My Little Embryo. I was nervous, but also excited, because a lot of people I follow on the internet had said that at six weeks they saw the heartbeat.

Not yolk sacs. Not little embryos floating around. Gestational sacs. And, yes, I am using the suffix of s, and, yes, that means exactly what you think it does. We transferred two embryos, and presumably, two were hanging out in those sacs.

My provider was incredibly reassuring, telling us that this was okay and that the sacs were measuring well and all was good. But then, y’all, I made a rookie mistake.

Google images were FLOODED with pictures of six-week-old twin ultrasounds where there were two visible babies. Oh, and there were also a bunch of stories about how people that didn’t have anything but sacs miscarried immediately after. Does anyone ever find anything helpful and not terrifying on pregnancy forums? I’m convinced they exist entirely to ratchet up your abject terror during the gestation process. I also wound up seeing a bunch of stuff on vanishing twin syndrome where one of the babies just... stops being.

I spent the next three days alternating between panic and crying. I mentioned in my last column that everything was already scary and it was hard to feel normal feelings about the process. This just amped that up by a million. Eventually, I burned out on intense emotions, because there’s just been a lot in this pregnancy.

I walked around for the next week and a half varying between cautious optimism (I haven’t spotted or anything, this is probably fine.) and pessimism (My boobs don’t hurt as much today; everything is ruined.) This was after consulting all of the OBs and midwives I know (a decent amount of people) about whether this was ok, and hearing that it was probably fine over and over. I still couldn’t bring myself to believe it.

We went in for an eight-week ultrasound, and I braced myself for one of two possibilities — either no babies would be there at all, or only one would be, the other one vanished. Those were really the only things I could consider. It didn’t help that eight weeks was when we lost our last baby; I’d been pretty on edge already anyway.

It turns out that the million actual providers that I know are more reliable than Google. Shocking, right?

Present on the screen were two perfectly sized fetuses with perfect heartbeats. I cried listening to them and felt a lot of relief. It’s still early, there’s a lot of important growth in the next few weeks, and the miscarriage possibility is certainly still there. But things are a little less scary.

The moral of this story is that early ultrasounds can vary wildly and that you should probably not do what I did by obsessively Googling things. It's not a good idea that I will undoubtedly do it at least 17 more times in the first trimester alone. I’m terrible at taking my own advice.

I’ll be back soon, but in the meantime, come hang out with me on Instagram! Since the big reveal, I’m actually posting again, because I’m not worried that I’ll slip up.

If you like this article, please share it! Your clicks keep us alive!
Tags
Navigating IVF
ivf
pregnancy
pelvic ultrasound
ultrasounds
assisted fertility