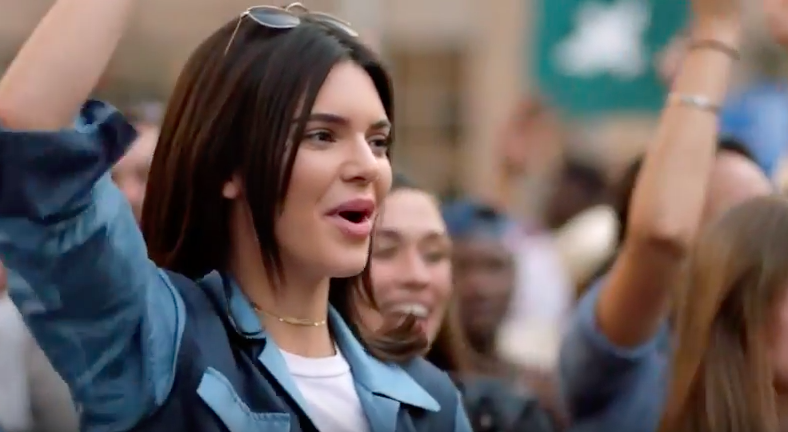 Well, someone from the Kardashian-Jenner clan has finally taken appropriation to a level which deserves the blue ribbon of appropriation. Kendall Jenner managed to land an advertisement for Pepsi which so clearly appropriated the #BlackLivesMatter movement, in addition to glossing over the bigotry Muslims are facing in America, while happily playing the role of the white savior — in a Pepsi advertisement. All of this while never once publicly standing up for marginalized people of color in any real way. Golf claps around! It’s mind boggling how these things happen, but I’m just going to go ahead and chalk it up to, well, white supremacy. That was easy. Let’s dissect it.

You can watch the entire hot mess below...

I’ve said it before, and I’ll say it again. I don’t dislike the Kardashian-Jenner clan (I didn’t use a K on “clan” for obvious reasons, but at this point, it may be brand-appropriate) for whatever reason you’re thinking. I recognize that the consensus regarding that family ranges from annoyance to flat-out rage. The rage is so disproportionate that I can only chalk it up to one thing. Sexism.  Man (pun intended), does our patriarchal society hate when sexy women use their sexuality to advance their careers.

Had my Civil Rights organizing grandfather known to hand out Pepsi to the police he could have saved himself many years of exhausting work! Perhaps the most offensive part is how the advertisement clearly manipulates imagery of the award-winning photograph of mother and nurse, Ieshia Evans, to SELL A SOFT DRINK. Oh, the shade you deserve right now Pepsi.

This conundrum gives so many red-blooded American males an insatiable rage boner. Try as they might to disguise their sexist feelings as hating the family for being over-exposed, this move is thwarted when they slip into name-calling, usually about their sexual dalliances or being “publicity whores.” I see you women haters, and I do not play for your team so don’t even get excited.

But I also don’t play for the Kardashian-Jenner team of appropriating everything you possibly can about black culture while never once standing up for black people publicly. You can love a black person and still be anti-black in your actions. You can admire black culture but not love black people. These actions are all separate and require nuanced thinking to deconstruct, but I believe you can do it.

How does one advertisement go so magnificently wrong, managing to center whiteness in the story of the battles of marginalized people, while playing down the horrific effects of police brutality and concluding in a white savior grand finale?

I don’t know, but Pepsi paid someone good money to come up with it. And before we think that this is an oversight, know that when I worked for a major television network, promos for the network had to go through fifty set of eyes before they were given the okay. We had meetings over whether or not to shave a second off a soundbite.  I speak the truth.

In this grave mistake of an ad, Pepsi made it incredibly clear that they were more than willing to use our resistance and our movements as accessories to sell their soft drink while centering whiteness. Screw your marches to ask that the police respect your humanity and stop murdering your children. White supremacy for all, y’all. The people of color make such an artful backdrop for Jenner’s heroic whiteness as she slips out of a fashion shoot to join the protest (something I have NEVER seen a member of that family do) and hand a handsome police officer a Pepsi, which forces him to break into a smile. Meanwhile, the lone Muslim woman gets her photo (thus ending her creative block) because the blinding beauty of whiteness is a cure-all for every ailment! And everyone’s happy.

Except we live in the real world and people of color are grabbing their vomit bags. (And their wallets Pepsi. You hear me? WALLETS).

Had my Civil Rights organizing grandfather known to hand out Pepsi to the police he could have saved himself many years of exhausting work! Perhaps the most offensive part is how the advertisement clearly manipulates imagery of the award-winning photograph of mother and nurse, Ieshia Evans, to SELL A SOFT DRINK. Oh, the shade you deserve right now Pepsi.

Had the Kardashian-Jenner family had any real love for people of color instead of only loving appropriation and dating black men, someone in that family would have realized this advertisement was an insulting train wreck. If the family loved black people instead of the features of black people (big lips, big butts) I would actually see them at maybe one protest for #BlackLivesMatter. Just one. They could bring their enormous audience to a movement that is deserving of all of America’s attention, instead of ripping it off for the sake of receiving a huge paycheck. I am all about getting that money, but if you’re actually harming people, I don’t wish you well.

My problem with the Kardashian-Jenner family all along has been their lukewarm stance on helping marginalized people in ways which don’t pad their pockets. If the family loved black people, they would make an effort to correct every fashion publication that incorrectly credits them with bringing back “big butts” or “big lips” and set the record straight that women of color wear these features whether they are “trendy” or not. Further more, we are so often demonized for these features and made to be the butt of white supremacy’s jokes so often that the dialogue of two white girls chastising a black woman will live longer than all of us in a Sir Mix-A-Lot song.

Because — oh my god Becky, look at her butt.

I mean only a white woman can sell lip gloss like hot cakes so soon after her lips drastically change in appearance due to cosmetic surgery.

Black culture is not for sale. And you’ll have to fight me before you turn a movement for our humanity into another commodity. So have a seat Pepsi and Kendall. Live For The Now? I’m just trying to live, and you’re actually making it harder.

If you like this article, please share it! Your clicks keep us alive!
Tags
Pepsi
Kendall Jenner
Kardashians
Kardashian
Cultural Appropriation
racism
advertising