Addicted To Nostalgia: Vintage Estate Sales, My Mother, And Me 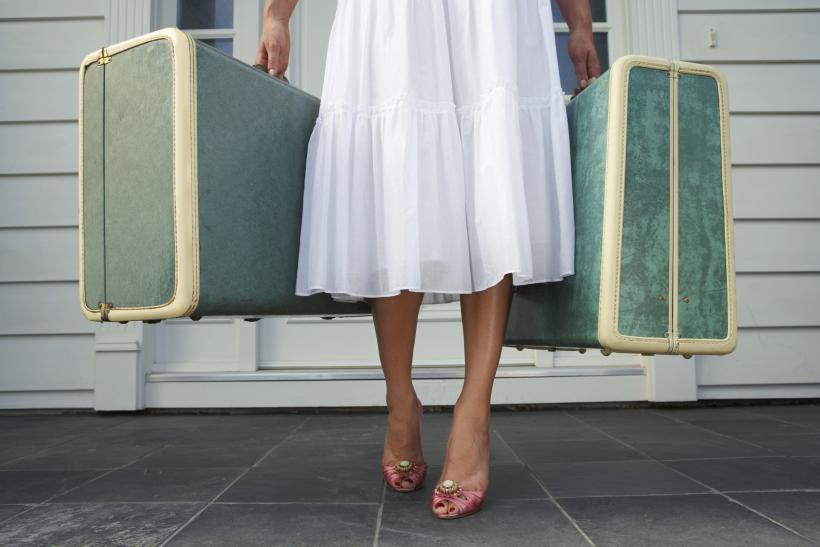 There was a time when my entire life evolved to revolve around vintage.

I fell in love with vintage as I was coming to terms with the fact that I just might never quite fit in. Since I was a little girl, I knew I was different. There were so many things that prevented me from being ordinary. As early as the third grade I was categorized as “gifted.” Add being one half of a set of twins, and it was pretty early on that I accepted the realization that I would always be different somehow.

I constantly felt like an outsider looking in, but my old soul was soothed by the uniqueness of every single gorgeous garment I would find when I went hunting for vintage pieces. Each piece I crossed paths with had survived for decades and was likely the only one of its kind left. There's something seductive about a handmade design, usually created for some lavish occasion in the '60s that only my imagination could fathom in terms of extravagance. Even more alluring were the smaller, more underwhelming designs that possessed a certain heartfelt quality to them. Every piece was special, and I always related to the concept of being “special.” They made me feel invincible.

"At times, it seemed as if there was never enough nostalgia for me."

I had become more enamored with vintage very shortly after my mother passed away. She was the first person who knew that I wasn't like other people. Of course, every mom thinks their child is extraordinary. But my mother didn't just think so, she knew as soon as I was born. And after she died, I held onto that belief.

Being from Connecticut, I grew up right outside the wealthier parts of Fairfield County. The “Golden Triangle” is a collection of cities that contains a concentration of the wealth in the area. The income of residents living in the Golden Triangle amounts to an average of 2 million and up. As a result, I figured out that when wealthy old people died, they left behind large inheritances and estates. There were wardrobes full of virtually untouched classic clothing that often went neglected by the more serious art and furniture dealers who arrived before me. On the other hand, vintage clothing scavengers showed up at ungodly hours for those pristine pieces, like the “Deadstock” pile of women’s hand gloves I acquired that had never been worn and came with Sunday’s best shift dresses in coordinating colors. I didn't just think they would be ripe for my collection — they would be memorialized by a person who truly appreciated the keepsake value of a dead loved one’s possessions.

Nothing excited me more than the delicate aroma of moth balls. Nothing compared to floating through a thrift shop's abundantly messy ocean — an ocean that I was always ready to submerge myself in. The vibrations of vinyl records wafted through the air while I carefully caressed each hanger and explored every inch of the store.

Like any great love affair, it started off slow. The first sign was my flirtation with the occasional tag sale. Soon, I was busting u-turns at the slightest glimpse of an "Estate Sale" sign. Suddenly, I found myself spending all of my free time scouring the classifieds for weekend sale announcements. I began dedicating my mornings to being the first in line. I wanted to be armed and ready to fight tooth and nail for all-access to a stranger’s attic.

After my mother’s wake, I remember rummaging through her closet. She always hated when I would dig through her belongings. It was incredibly comforting to curl up on top of the rabbit and mink furs that I had ripped off the rack and laid on the ground. The soft amber hairs still smelled like her, and it brought me back to every time she told the story about when my dad surprised her with this fancy fur.

Never wanting to let go of my mother, I clung to vintage as a sliver of healing in the world of pain I was in.

Somewhere between taking daily trips to the Salvation Army and donating all of my “normal” clothes to Goodwill, I managed to fall in love all over again. I had recently replaced the lenses inside a pair of my mother's Golden Girls-era bifocals with my own prescription. I looked through these oversized frames the first time I saw the man who would become my husband.

"I felt like he would know everything about life, including how to handle me."

He was tall, blonde, and handsome. He said he liked my glasses. In Connecticut, most people had a difficult time having a serious conversation with me due to my retro aesthetic. Most people thought I was a weirdo (this was back before it was cool to wear giant frames). He didn’t. I understood this as the ability to accept what other people usually saw as defective, which would be a necessary trait as I continued to fight my own feelings of being flawed. I felt that way most of the time.

Clever detective work told me he, too, was somewhat broken. We had grown up in the same town and gone to the same high school, yet we had never once had a conversation. But being from a small town had its perks; since everyone in our small town usually knew someone you knew, I found out that he had lost a family member close to him a few years earlier as well. He had this air of wisdom about him. I felt like he would know everything about life, including how to handle me.

Life changes come in pairs sometimes, and I decided to take my relationship with him and vintage clothing to another level at the same time. I started selling the clothes I loved online and at NYC trade shows, and then we moved into together.

From a distance, a vintage girl can seem charming and lovably odd until you realize that she literally comes with a ton of baggage.

Without the proper storage, your stash can suffocate someone who doesn’t have the same appreciation for your millinery collection, or your stack of acid-washed mom jeans. Since we were now sharing a closet, it didn’t matter how carefully stitched the Blanche Deveruex-sized shoulder pads had been on the interior of my sequined dresses. To him, they were simply old clothes taking up space.

When everything old can be seen as a rare gem, it makes it incredibly difficult to part ways with precious pieces. I found myself clutching the Coogi colored sweaters in my wardrobe, overwhelmed by the fear they would soon be a memory — we were running out of space. My love affair with vintage clothing was verging on an obsession. At times, it seemed as if there was never enough nostalgia for me.

We lived in a one-bedroom apartment and I didn't want to let go of any of it. Then one night, while I was flipping through TV stations, I came across an episode of Hoarders. And every single one of the hoarders had suffered an enormous loss, usually a death of a close relative or a loved one.

I ugly-cried to the point of gasping for air. Surrounded by the shadows old clothing, mounds and heaps of musty ancient linens, my space started closing in around me. Sitting in my cluttered room, I knew I wasn’t at the stage where you would find a mummified cat under a ceiling-high stack of laundry, but I was definitely heading in that direction. I had just acquired my third storage unit, and it was already bursting at the seams. The contents inside no longer seemed like a carefully curated collection of inventory. I knew I had a real problem. It seemed like there was really no end in sight for when I would stop buying junk.

The thrift shop still felt like home, and like other hoarders, I was still grasping onto material things to cover the immense void in my life caused by a loss I never fully dealt with. The death of my mother was as devastating as it was unexpected. So many times, people watch the circus of reality TV that is this show and wonder, “How do people get there?” I was living proof that it was possible. The random things I continued to collect were meaningless in comparison to the person I lost. But if collecting these inanimate objects meant that I could replace the grief of death with the excitement of a vintage find, I was willing to chase that high.

For months, my then fiancé and I argued about my hoarding habit. Which lead us on our way to an inevitable ultimatum: he wanted me to choose between him or my hoard. The choice seemed obvious — either the man who loved me completely or an excess of seemingly meaningless, literal garbage.

But I just wasn’t ready to make the right decision.

As things between us reached their boiling point, my fiancé went to visit his brother in Portland. He went alone. I think he really just needed to catch his breath, to do it somewhere with fresh air devoid of dust and the stench of aged fabric.

Upon his return, he described a place where everyone was wearing vintage. He knew I would love it. He told fables of streets that were filled with people in faded band t-shirts and Rick Morranis-sized, thick-rimmed glasses. Shocked by his testimony, I immediately googled “Portland, Oregon.”

This place seemed straight out of a fairytale for me — it was “Vintage Wonderland.”

Less than a month later, he presented me with an estate jewelry ring. The clustered diamonds glimmered on top of the yellow gold trumpet setting. As he slid it on my finger, he not only asked to marry me but if I would move with him to Portland as well. Dreaming of a fresh start for the rest of our lives together, I agreed.

When we moved, it was the first time I actually wanted to leave anything behind. I narrowed it down to several boxes. Anything with leather or sequins automatically made the cut for our move, but I agreed it was best to not even look inside my overstuffed storage units. He saved me from myself and helped me reshape my priorities. We married this past May with a nontraditional, vintage-heavy wedding ceremony.

We are now living happily ever after in Oregon, where that gaping emptiness is now completely filled with an unconditional love from my husband. However, my love of vintage will always be in my blood. But despite being forever enchanted by the scent of mothballs, I discovered why I needed to let go of the things that chained me to my past: I have to make space for all of the treasures waiting for me in the future.