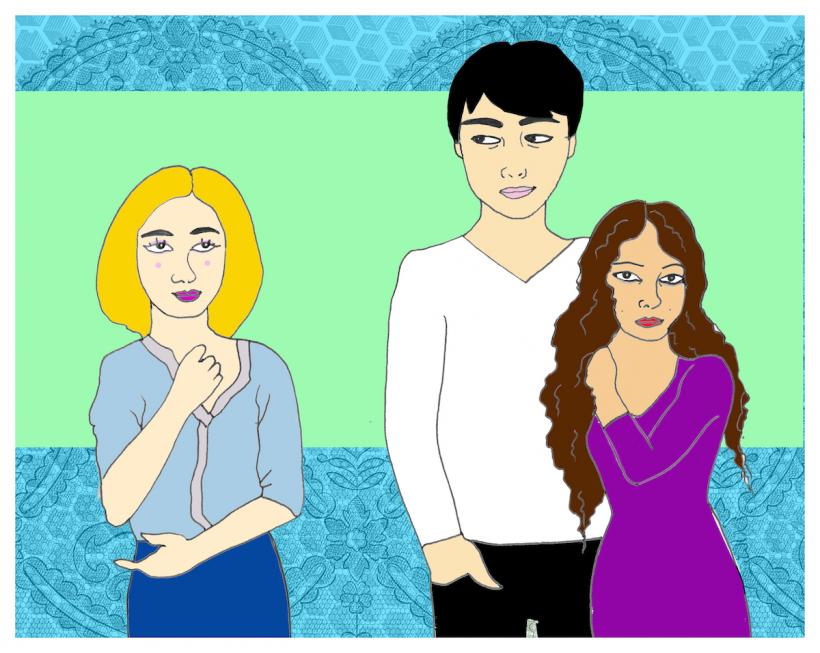 He's obsessed with her. It's really starting to hurt me, and I don't know whether to say something to him or not. (Artwork: Tess Emily Rodriguez)

This is a bit more complicated than it sounds.

As stupid as it is, I started dating a guy I liked at work.

I know — bad move. He only works for a couple of hours a week (less than half a day) as he has another job and this is just extra money, and he's leaving soon so I thought it would be fine.

The problem is that he's been to known to be obsessed/in love with another girl that works there (again, she has another job so only a few hours a week). But she has repeatedly told everyone she is not interested in him like that. As far as I'm aware she's never directly said it to him though.

Being new, I had no idea the level of his interest in her until it was too late and I was already involved. We still see each other outside of work.

His obsession with her is really starting to hurt me, and I don't know whether to say something to him or not.

He messages her every day, buys her often expensive things all the time, always brings her up in conversation when we're alone together, spends all his time on our nights out next to her, his phone passcode is her birthday, and he swaps his shifts to be on with her.

Am I wrong in thinking this is weird? Am I the only one who thinks the other girl is stringing him along by not being blunt with him?

I know I should call it quits, but do I say something to him about it how he made me feel, or am I just being jealous?

Listen to your gut.

His obsession over another girl is a major, huge, flashing, red flag.

Don’t beat yourself up over dating a co-worker. We have all been there. When you spend time with people all week, even if it’s part-time, it’s natural that some people may find themselves attracted to one another.

You know what the problem is. This is not just an oh, he has unresolved feelings scenario; his behavior is — as you pointed out — obsessive.

One word answer for you — RUN.

Seriously, this is not a healthy person. It is not your job to fix him or to cure him of this obsession. It is also not your job to sort out her communication with him. If she hasn’t been direct with him, that’s their problem. Get out of this mucky mess.

As far as what to say to him, be honest and kind. Tell him that you have no interest in dating someone who spends their time talking, thinking, and focusing on someone else. Depending on how receptive he is to hear what you have to say, you can kindly point out that he is fixated on her in an unhealthy way.

That said, you have no obligation to say anything other than, “this is not working for me.”

The information within Ask Erin should in no way be interpreted as medical advice because I’m not a medical professional. But I am here to help — to share with you the wisdom I’ve gained after years of making mistakes. If you have a question for me about relationships, addiction, dating, friendships, depression, parenting, sex, consent, what I’m watching, what I’m reading, Albite, or anything at all, use the contact form below or email me at  askerin@ravishly.com. As always, your anonymity is golden. Lastly, I’m so excited to share with you my Ask Erin Self-Care Guide, free when you sign up for my weekly newsletter. xoxo

If you like this article, please share it! Your clicks keep us alive!
Tags
Ask Erin
obsessed
obsession
dating
workplace
relationship advice