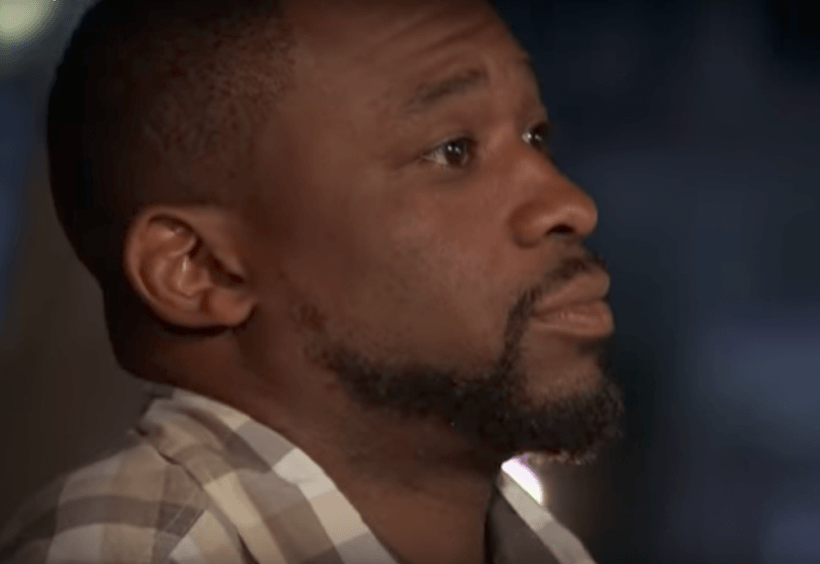 Previews for a showdown between Kenny & Lee marked a dark turn for Rachel's season of "The Bachelorette." (Image Credit: YouTube/Bachelor Nation on ABC)

The Bachelorette picks back up where we left off: Lee fighting with Eric, where it is becoming more and more apparent that Lee is such a smug dickhead. From Nashville, Tennessee, he gives everyone from the South a bad rep as he joyously antagonizes every Black man in the house.

As Kenny sits down to prepare for his date, Lee feels entitled to take up all the space and hover around the entire time. I’m so frustrated that Rachel doesn't stop these shenanigans, which I guarantee encourages Lee to keep it up.

Then there’s a typical white bro conversation as one of the other housemates reminds Dean that everyone is “different” and from a “different background” and has his own quirks, which is a lightly veiled way of saying Lee hates black people. To my shock, Dean (AKA the “I’m ready to go black and I’m never going back” guy) comes through to keep it real. We hear him during the confessional point out that Lee is getting under the skin of people he loves and respects, who he may not be used to seeing every day from a “cultural perspective.” Sadly, he is yet another bystander, and does nothing to actually stop Lee and his microaggressive shenanigans.

Dean is that friend who has #BlackLivesMatter in his social media profiles but doesn't actually work to stop racism in real life when he sees it. It’s only slightly impressive that he even calls it out at all, as his other friends chalk up Lee’s blatant racism to having “quirks."

Bryan uses this tension as an opportunity to make this all about him… and Rachel. Rachel is on board and proceeds to make googly eyes at him. The thirst remains real as she’s trying to convince herself that he’s not a ho. At this point, I’m screaming at my television because it’s so apparent how in “lust” they are and resistance seems futile. Of course, they then proceed to slob each other down again. If there was an Emmy for sloppiest kiss, this pair would win for sure.

Back at the house, everyone is quietly hoping that Lee gets punched in the face. By anyone.

Apparently, Kenny and Lee had some kind of friendship prior to Lee’s rude interruption of Kenny’s date. A muffled argument is overheard as Kenny takes Lee outside to confront him about it.

Kenny seems like he’s falling for Rachel, but he’s forced to spend his date time convincing her that he isn’t some angry monster, a situation that really aggravates me. The episode ends as Kenny leaves his date with Rachel and heads straight for Lee...

That’s when Rachel has a breakdown: she starts crying about the pressures of being a Black woman and how everyone is going to judge her decisions. It’s not really clear why she’s crying, and I find myself kind of rolling my eyes, thinking, “Girl, nobody is judging you.”

But it’s made abundantly clear that I have spoken way too soon. In the very next scene, we’re subjected to watching Rachel give Lee, of all people, a red rose… AND I AM TOTALLY JUDGING. Not only did she pick this racist POS over fresh AF Diggy… but Lee is just simply terrible. Like, even Dean knows he’s a bigot, and he’s out here dreaming about jezebels.

Things cool down temporarily. At some point, ABC thinks airing a commercial featuring Biggie Smalls shilling Oreo cookies is a good idea. Eventually, the group ends up at Hilton Head Island in South Carolina. I only know the name because every cast member said it about 1,000 times, and I suspect it is a shameless endorsement.

A quick Google search tells me this area is famous for its Old South plantations. Later on in the episode, there is a country music concert. But anyway.

Dean is starting to grow on me, and Rachel seems really into him. They head to their first date on some kind of blimp, and Rachel is pouring and drinking lots of champagne. They make out on the blimp and it’s secretly really cute. Like... butterflies level adorable.

As Dean is taking his love to “new heights,” all the other old bachelors seem salty because he’s a young and virile 25. They seem flabbergasted that Rachel could even consider such a young guy because age plays such a huge role in their selection process. I think it’s different for Rachel because as they all know, she is the “whole package.” She does acknowledge he may not be ready to get married and start a family, but then they make a huge connection talking about their upbringings.

Everything seems to be going fine until their dinner date. Poor Dean is going on for what feels like forever about the trauma of his mother’s cancer and eventual death. I don’t know if producers forgot the sad music or they ran out of time, but there are literally crickets chirping in the background. This is way too much for me, but he still gets a rose. They end the date with a country music slow dance at a “Russell Dickerson” concert (whoever TF that is).

We take another commercial break, and there is another tragic attempt at target marketing where someone at ABC thought that a promotion for The Gong Show set to the beat of “The Thong Song” was something that their viewers would be enticed by.

Group Date On A Boat With A Spelling Bee

When we return, all the boys are setting out to sea on some boat around Hilton Head. Rachel looks adorable in a sailor’s hat and gorgeous beach waves in her hair, but she does seem a little drunk. There’s a really painful dance line where all the guys are attempting to dance, then somehow that turns into a rap battle.

Obviously, Kenny has bars. But then Peter comes up and more pain ensues. At the end of the battle, I swear I heard a record scratch when he ends the battle saying Rachel is “a girl from the Hood.” I’m pretty sure she was raised upper middle class somewhere in Houston, Texas… but I mean, I guess he had to rhyme “good” and "hood” somehow. I really like Peter, so even though he gets all the side eye from me for this one, I can let it slide.

After the spelling bee (yeah, there’s a spelling bee), we see Rachel and Peter together again on a date. Their chemistry is undeniable, and he is just so obviously smitten. As we watch them hold hands, it looks like they were meant to be together. A conversation about hardwood floors sparks a very important question for a lot of relationships, and Rachel and Peter discuss where they would live if things continue to progress. Flirtatiously asking if he is trying to make her go to Wisconsin, it is clear Rachel doesn’t subscribe to the old-fashioned adage of never moving for a man. Even though Peter says he hasn’t thought of Texas as a potential place to live, it doesn’t seem necessary for Rachel, as she confesses that “for the right reasons, I would move.”

We find Rachel talking about her ex again, as she makes sure to let Peter know he’s special enough for her to make that “sacrifice.” “If I love someone and we talk about it, I would absolutely move,” she says. But she wants to know that he would do the same, even though she’s licensed to practice in Wisconsin. And now they’re making out.

Eric shows up, and he strikes me as childish. But I think that’s what she likes about him, since she comes off as so serious. She likes to clean and watch ratchet TV, but she is as far from ratchet as possible. Sadly, this seems to be where things take a racist turn.

On Twitter, the verified account of an alleged former The Bachelor contestant Leah Block tweeted that her roommate thought she was watching Love and Hip Hop. Now, there is nothing obviously offensive about that tweet, except for the fact that Block indicated how “hilarious” she and her roommate thought it was. We are all assuming her roommate is white and the joke is that she saw Black people on TV and thought, “Eh, same difference.”

Well, Rachel clapped back with the perfect response, and gave us all the life we needed. 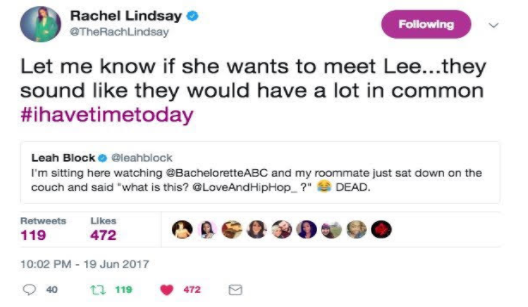 Rachel’s response was classic. “Let me know if she wants to meet Lee… they sound like they would have a lot in common. #IHaveTimeToday.” Block appeared on a recent season of Bachelor in Paradise amid speculation of surgical enhancement. An hour or less after the comment appeared, Block deleted her account. But as they say, the internet is forever.

Speaking of racist Lee, the night continues to devolve into another series of stereotypes, as the non-Black bachelors in the house get into it with the Black contestants. Lee is whack. Nobody likes you, Lee.

He spends his remaining time with Rachel manipulating her and trying to say that their dustup earlier had him shaken and terrified in the presence of big, Black, “aggressive” Kenny. Lee repeatedly calls Kenny “aggressive,” and even classifies him as a “ticking time bomb.”

As Eric describes it, Iggy is a “gossip queen” and wastes his one-on-one time slandering Josiah. Josiah’s response is my favorite quote of the night, as he says, “With all due respect, Iggy’s a bitch.”

Kenny seems like he’s falling for Rachel, but he’s forced to spend his date time convincing her that he isn’t some angry monster, a situation that really aggravates me. The episode ends as Kenny leaves his date with Rachel and heads straight for Lee. We see him tap Lee on the shoulder and take him outside. Lee’s ready to pour gas on the fire… and here we are, left with another cliffhanger.

We’re clearly in store for an epic battle between Kenny and Lee, and next week will offer a two-part banger on Monday and Tuesday, back-to-back episodes in which fisticuffs are guaranteed to ensue. Previews show that Kenny has a swollen eye, and blood is shed. I’m excited but nervous to wait and see what will happen next.

If you like this article, please share it! Your clicks keep us alive!
Tags
The Bachelorette
Rachel
Kenny
Lee
racism
Love
relationship
Dean
Peter