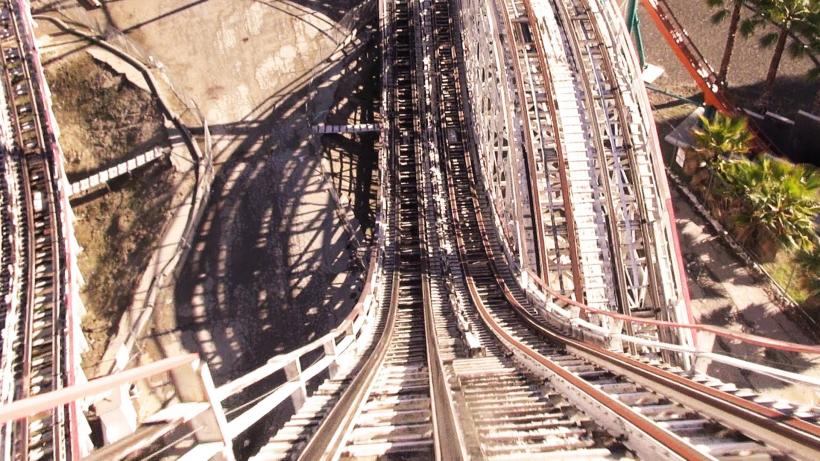 At Six Flags Magic Mountain in California, there is a roller coaster called Colossus. (To be completely accurate, I'm not sure if Colossus actually exists anymore because I haven't been to Magic Mountain in 25 years. But it was there for a long time, and that's the only thing that matters for the purposes of the story. [Editor's Note: Colossus doesn't exist anymore. It caught on fire in 2014. There is, though, a new and improved "Twisted Colossus."])

Colossus is (or was) a roller coaster made out of matchsticks. I mean, I don't know exactly what material it is constructed with, but it might as well be matchsticks. Or balsa wood. Something you’d have used in fifth grade to try to make a bridge that would inevitably break under the weight of a hard-boiled egg. I haven't Googled this, but I think it might be the first roller coaster ever built. [Editor's Note Part II: Nope, it was this one.]

Colossus was born in the days before the shinier, more gravity-defying superhero-themed rides. The kind of rides that dominate theme parks now, turning you upside down, making you move at approximately the speed of light, occasionally making you barf. These are built of something like titanium. Though I’ve never been on one (I prefer to live my life right side up thanks), I assume these roller coasters are designed to be frightening.

But I’m here to tell you: There is nothing more frightening than being held in a seat with nothing but a flimsy bar that barely locks and your will to live.

Colossus was the most frightening of them all.

The initial climb starts with a slow chugging. It's slow enough to make you feel like it might never reach the top, and fast enough to make you wonder if the whole thing is about to collapse, sending you and your now detached lap bar in a gravitational free fall toward the earth. When, after 45 agonizing seconds, you reach the plateau, Colossus takes a pause for you to survey, in a combination of both terror and awe, the earth below. From there you plummet back to the ground, while Colossus squeaks and moans and you scream out things like, “I LOVE YOU MOM. DON’T GIVE MY ROOM TO JENNY WHEN I’M DEAD. OH AND THAT TIME I SAID I DIDN’T EAT THE LAST BROWNIE, I LIED. I ATE THE BROWNIE. SORRY. SEE YOU IN THE AFTERLIFE.”

This is my diet and weight loss/gain history in a nutshell.

Sure, it's ridiculous to compare your life to a poorly constructed, absolutely terrifying rollercoaster — but also sadly accurate.

I went on my first diet when I was nine. I weighed something like 50 pounds at the time. In 1983, dieting was the chic thing to do. My mom was on a diet. All of my friends were on diets, or talking about being on diets. Everyone was doing Jazzercise and eating things that were fat-free and sugar-free and joy-free. So I went on a "diet."

My “diet” essentially consisted of not eating foods I didn't like. At the time, this served my needs pretty well, because who ever wants to eat canned asparagus? No one. But the victory was in the fact that I could tell everyone I was on a diet.

And then when I was 16, I went to live in Europe for a while. While there, I ate approximately 2 gallons of Nutella and 755 loaves of freshly baked bread. Because I was 16, and drinking is legal in Europe when you're 16, I found a little bar called Cavete. I sat in a corner upstairs most nights of the week, chugging beer that was full of strawberries and peaches (I know this sounds weird, but it was actually really delightful), and eating bowls of spinach pasta drenched in creamy sauce.

I believe in the right to be fat. Unapologetically fat. I will kick the ass of any person who tells anyone they can't, or shouldn't, be fat. I haven't hated being fat. My body has been there for me, even when I wasn't there for it. But things are changing.

I rode my bike all over the cobblestone roads of the oldest parts of the city, finding new food and drink everywhere I went. I ate hot crusty bread and cheese. I drank sake and beer. I rode a train to Italy and drowned myself in spaghetti and street-vendor gelato and pizza (which is ironically not that good in Italy). I went to Switzerland and ate chocolate until chocolate was no longer appetizing. I basically Very Hungry Caterpillar’ed my way through Western Europe.

It was a good time.

When I came home a few months later, I was wearing a sundress and a sports bra because nothing else fit. All of the Caterpillar stockpiling left me with 15 new pounds.

I went to visit my friends before the start of our senior year of high school and one of them said, "Wow Europe made you fat.” To which I replied, “Oh. Well, America made you an asshole.”

And my weight paranoia was born.

And with every rebound weight gain came the steady chug chug chug of Colossus. I knew what was up ahead, but I stood in the kitchen eating Oreos and pretending not to care.

At some point, I would land at a plateau, a place where I could eat the cake and the Oreos and not gain any more weight. And once I got to the top I would look around at the weight-loss below me.

When I got tired of looking around, buying clothes in the plus size section, being the fattest person in the room, having my family tell me things like, "You'd be so pretty if you only lost some weight,”  I would find a new diet and hit it with gusto, tossing the Oreos in the trash, cleaning the cupboards of all the foods I decided I couldn’t eat anymore. New diet energy surged through my veins. The power of my food and my weight in my control, the rapid loss only amplifying the high.

I’d speed down, down, down with the creaking of the wood below me, my weight loss creating momentum along the track — until I hit the bottom. But the bottom never lasted, and the creep up came as quickly as it went.

People talk about yo-yo dieting. But unless you've lived yo-yo dieting, you don't know what it feels to climb that mountain knowing what waits for you at the top — and on the other side.

There are plenty of scientific explanations for why this happens, how it happens. There are far fewer explanations of how to stop it from happening. And even fewer people talking about the grief that is standing in a closet full of clothes ranging from sizes 6 to 20.

It's humiliating. It seems like such a simple thing to be in control of your weight — until you realize that you're not in control of it.

For every pound I've lost, I've gained it back, and it has brought a friend. I started this journey, this column, because I didn't know how to stop the roller coaster. I just knew it needed to be torn down, something new built in its place.

I believe in the right to be fat. Unapologetically fat. I will kick the ass of any person who tells anyone they can't, or shouldn't, be fat. I haven't hated being fat. My body has been there for me, even when I wasn't there for it. But things are changing.

My joints are degenerating. My ankle is screaming; it will not be ignored. Being fat isn't working for my body. And being obsessed with food has never made me enlightened — only miserable.

I'm beginning now to see food differently. I'm beginning to see myself differently. I haven’t figured it all out. I don’t know if I’ll ever figure it all out. But I know that yesterday the idea of eating pizza — how much I would eat, would I eat too much — sent me into a panic spiral. I also know that today I ate pizza without panic. I ate the pizza. I thoroughly enjoyed the pizza. And when I was done — when I had enough pizza — I stopped eating the pizza.

I’ve counted points and calories and carbs and fat and steps. And I’m not going to live that way anymore. That life is both miserable and unsustainable. And, as evidenced by my apt metaphor above, pretty ridiculous.

I am seven weeks into BB&A. It’s been easy. It’s been hard. It’s been incredible. It’s been miserable. I'm tearing down Colossus (it's burned to the ground, regardless), and replacing it with my bike.

If you like this article, please share it! Your clicks keep us alive!
Tags
BB&A
Beyond Before & After
weight
control
diet
anti-diet
isabel foxen duke