The Birth Of Our Rainbow Baby 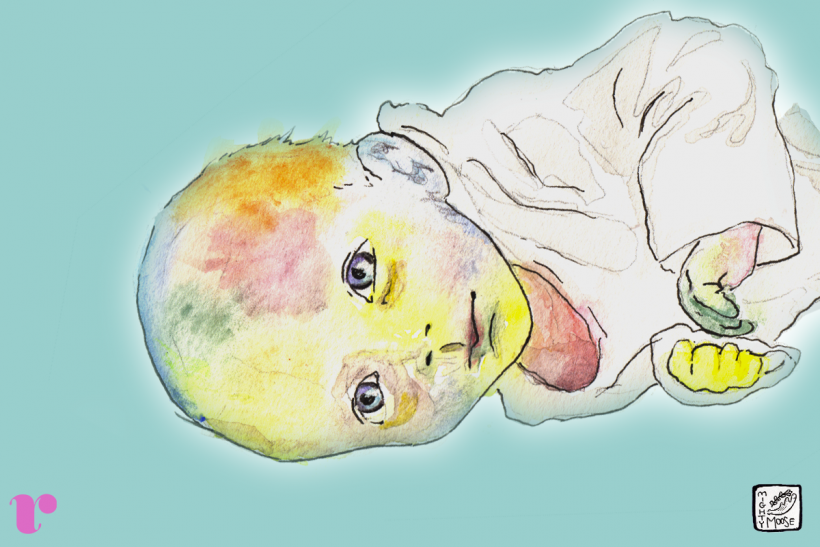 Well, well, well…it’s been a minute (or a couple of months) since my last Rav’s Repro column. You may recall I was 34 weeks pregnant, eyeing that finish line, feeling like I was going to pop. (That feeling must have been a premonition.)

A LOT has happened since then. And by a lot I mean, my rainbow baby FINALLY (but also quickly) arrived.

Friday, May 26th was a rough day. I felt like crap — my abdominal strain was a ten on the pain scale, I was exhausted from lack of sleep, my back everything hurt. And, to top it all off, I literally busted the seam on my fave Hatch maternity jumpsuit.

A minute or two before midnight, freshly showered, after eating some cherries, I was getting ready to watch some TV in bed with my husband, excited that I could sleep in the next morning. Suddenly, I felt a gush of fluid. I knew it wasn’t pee.

It’s taken two years, four miscarriages, one second-trimester loss, six pregnancies, two rounds of IVF, lots of tests, five embryo transfers, fibroid surgery, reiki, acupuncture, meditation, the support of our entire family and many friends, and faith. It’s taken faith that this would happen, faith in myself, faith in the universal plan, faith in the soul I knew was coming.

I ran to the bathroom and a whole lot of clear fluid poured out. My water broke.

A little panic set in. Although I felt like I was done being pregnant, this was a bit too early for my liking. I didn't have my hospital bag packed; I still had work to do before maternity leave; I hadn’t played with the new stroller yet or put all the baby clothes in their proper place.

That’s the thing about having a baby. How and when it happens flies right out the window.

I threw a hospital bag together (I forgot my toothbrush, but at least I remembered a nursing bra), grabbed the waterproof mattress pad so I wouldn’t leak all over the Uber driver’s backseat (which we bought in case my water broke so we wouldn’t ruin the mattress, but clearly never had time to put on the actual bed), and headed to the hospital. Atticus, my 13-year-old, stayed home so that he could get some rest.

When we arrived, I felt calm. I didn't have any contractions; my biggest issue was trying not to leave a trail of fluid behind me as we headed up to Labor & Delivery. I was checked in and waited to see a resident, who had to confirm that my water did indeed break.

The resident came in, a medical student in tow, and explained that she would take a sample of the fluid during a pelvic exam to make sure it was amniotic fluid and not urine. I kindly pointed her in the direction of the large clear puddle on the floor and assured her that I knew my water broke. Undeterred, she proceeded with the pelvic exam, and my body promptly unleashed another gush of fluid.

“Oh, well, I guess we don’t need to test you. Your water has broken.”

The next step was seeing the OB. Mine was scheduled to be on call at 6 AM. His colleague came to check on me, and she explained that the removal of the cerclage (it is important to get a cerclage out before contractions start) was a simple procedure that shouldn't take more than a couple of minutes.

I am not even sure what exactly the issue was. They didn’t have the right speculum or something? After a grueling and increasingly painful 15 minutes, it was evident this was not going to be so simple. She suggested an epidural for the removal, followed by a Pitocin drip (they didn’t want me sitting there with a broken amniotic sac and no labor kicking in), and I agreed. If we were going to do this, I wanted to get the show on the road.

Off to a labor and delivery suite we went. First up was the epidural. Check. Then that pesky cerclage. Still unable to locate the correct speculum, I kid you not when I tell you they basically rigged a speculum (by combining two or something).

It took a MacGyvered speculum and seven (SEVEN, yes 7) people to get that cerclage out. All I could think of when I looked down at the three doctors, three nurses, and med student hovered around my pelvis was that my vagina had turned into a clown car (cue the Benny Hill music). 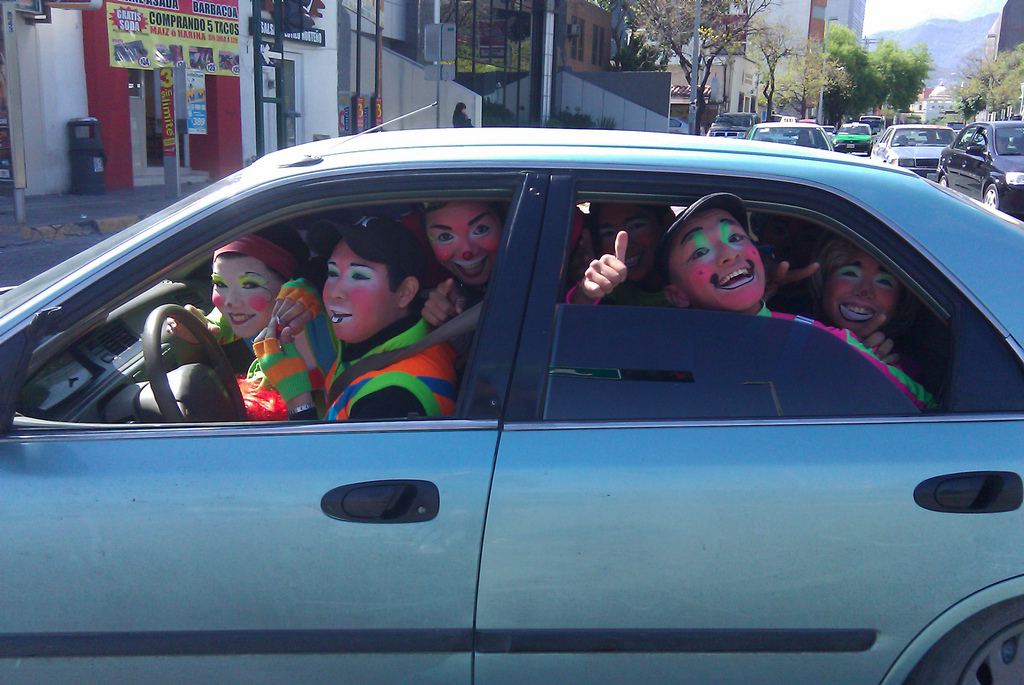 After, oh I don’t know, another 30 minutes, that cerclage was FINALLY out.

At this point, my poor husband (who is usually asleep before 11 PM and up at 5 AM) was beyond exhausted. I told him to take a snooze in the recliner. I turned on the TV and was thrilled to find a Roseanne marathon. My Pitocin drip started about 4:30 AM. I settled in and chilled out the best I could, watching Roseanne.

A little past 6 AM, my OB arrived. He checked my cervix; I was about 3 1/2 cm dilated. He predicted I would probably give birth around noon. We were then introduced to a pediatrician and nurse from the NICU. Because the baby was less than 35 weeks, he would automatically be taken to the NICU. They explained to me that he was on the cusp. He could come out and act like a full-term baby, or he might act like a preemie. We would just have to wait and see.

Over the next couple of hours, the contractions got stronger and closer together. At about 9:30 AM, Atticus and my husband's parents arrived. At 9:50 AM, the nurse could see on the monitor that my contractions were quite strong and close together. She checked my cervix — 10 cm dilated. It was go time.

My OB came in, we kissed the parents and kid and sent them off to the waiting room. At 9:59 AM, I began pushing.

As I held him, he began grunting, which I know now meant he was having some difficulty breathing. The NICU doctor and nurse whisked him away, and I made small talk with my OB as my placenta came out. Fun fact: I got a good look at my placenta, which I did not do when Atticus was born. It’s so gross looking but also utterly fascinating. 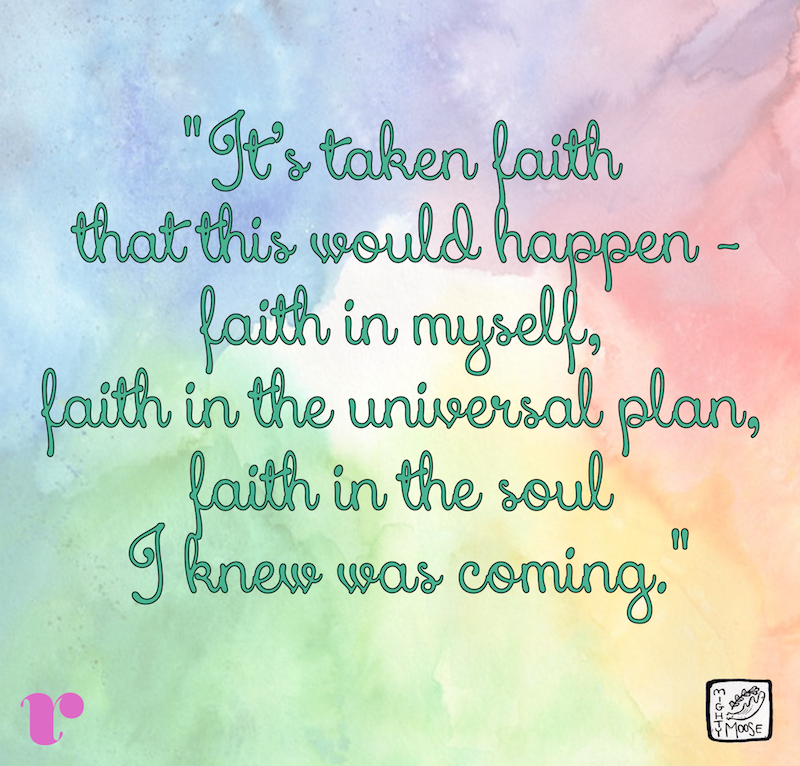 Franklin ended up spending one day shy of four weeks in the NICU. His lungs needed a bit more time to do their job properly. And it was a complete roller coaster ride in and of itself…but that’s a whole other story for next time. Another totally awesome (can you feel the sarcasm?) epilogue to this is that five days after bringing Franklin home from the hospital, there was a five alarm fire in our apartment building. Although the fire was contained to one floor (not ours), the water and soot damage to the interior of the walls has made our section of the building uninhabitable, requiring a gut renovation down to the building frame. Thankfully (and especially thank the universe for insurance), we have an apartment close-by while the renovation happens (which will probs be about a year).

So, it’s been an eventful couple of months. It’s been amazing and scary and wonderful and challenging. But the most important thing is that he is here. He is FINALLY here — our rainbow baby is home.

If you know me or if you’ve followed this journey with me online, you know it has not been an easy path. It’s taken two years, four miscarriages, one second-trimester loss, six pregnancies, two rounds of IVF, lots of tests, five embryo transfers, fibroid surgery, reiki, acupuncture, meditation, the support of our entire family and many friends, and faith. It’s taken faith that this would happen — faith in myself, faith in the universal plan, faith in the soul I knew was coming.

Welcome home, Franklin. I can't wait to spend the rest of my life with you.