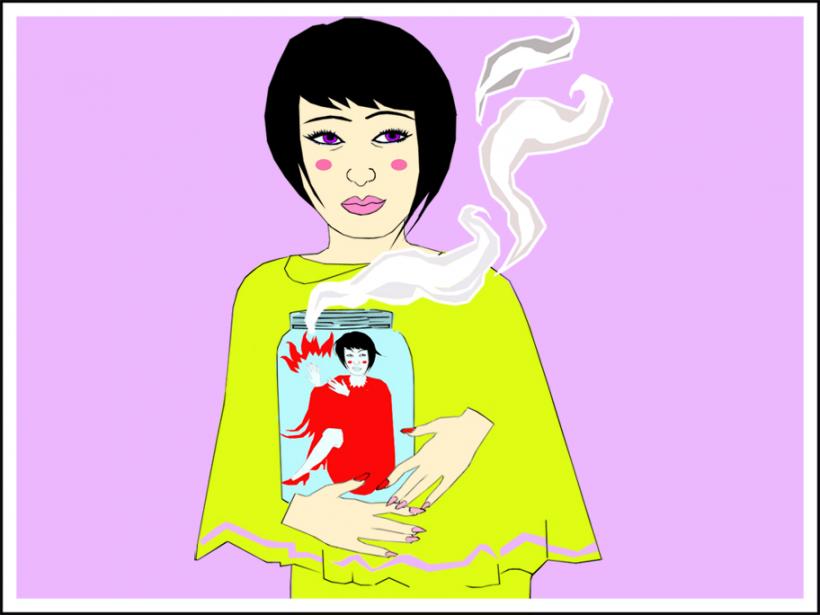 I need to know how to express anger after sexual abuse. (Artwork: Tess Emily Rodriguez)

This is the first time I've ever asked anyone online for advice like this, but I wanted some different input, and really like your work.

After surviving six years of daily sexual assault from age 10-16, which I recently remembered now at age 20, I am currently working with my anger. I have a supportive family and a wonderful therapist, who are all trying to help me express my anger over what happened.

The thing is, I am unable to physically show any signs of anger — I’m too scared, too well-trained not to.

My therapist suggested we try hitting a cushion with a tennis racket, and I was unable to do more than a few light taps. I never realized just how much my abuser squashed down my fight response until these past few weeks, but it's pretty drastic just how hard it is for me to even punch at our punching bag.

My abuser is no longer in the picture in any way, so this is all work I'm doing to physically show my anger on things like inanimate objects and so forth. Ask me to write about my anger, and I can do that no problem — or even talk about it. But ask me to physically show it, and I shut down, and it's sickening to realize I'd rather keep hurting myself (like through my eating disorder) than express physical anger.

So, I would simply like your input on how you might go about working on expressing your physical anger and some steps you might take. I'd love to hear another's opinion on the subject.

First, I am so happy to hear that you have the support of family and a good therapist. That makes my heart smile. And I’m proud of you for doing the work to heal. At 20, I could not confront that stuff, and I wish I had been able to. I would have saved myself years of self-destruction!

It’s not uncommon for victims of abuse to shut down the ability to express anger.

I was also sexually abused as a child, and I turned all my anger inward. When I was 16, before I told anyone about what had happened, I was seeing a therapist who noticed that I was always assuming guilt for things. He said something to me that resonated so deeply and has stuck with me all these years.

“All that guilt is unexpressed anger.”

At the time, I thought, No, he’s wrong. The only person I’m angry at is myself because I’m a real piece of sh*t.

Our minds have complex ways of protecting us. If we can’t access that anger, it’s a backward way of protecting our minds from the horrible truth. So, this functioned well for you (in a dysfunctional way) for many years. It doesn’t surprise me at all that you can access the anger when speaking or writing but not in a physical way.

I can tell you what worked for me.

Years of therapy and talking and writing DID help. But, I also needed ways in which I could unlock the anger that was stored in my body. After I had my first son, I started going to Kundalini yoga twice a week. Yoga was vital for me to get in touch with spirituality and my psyche. There is something about the mediation and breathing and body movements that literally and figuratively unlocks things for me. I have often burst into tears during yoga because that crap I’ve held onto is getting released.

As I moved through those physical releases, I found that I was able to connect with that unexpressed anger inside me.

Now, maybe yoga is not right for you. Try some different physical activities out — running, swimming, boxing, yoga, dance… whatever interests you. Take some quiet moments to sit with yourself and think about what you might want to try. Don’t worry about whether or not it will yield results. I believe that the universe pings us when we are looking for answers, and I believe you will get the ping you need.

Another thing that some therapists suggest is the old screaming into a pillow. This might take some warming up to happen. But, it feels good to scream with abandon like that. And obviously, the pillow is so that no one calls the police thinking you’re in harm's way!

I’m not sure if you’ve already done this, but with the help of your therapist, you might try writing a letter to your abuser, reading it aloud, and then setting it on fire (safely, of course!).

I’m sure you know intellectually that this was not your fault, but sometimes it takes a minute for your psyche to catch up. Let that little child know that it was not her fault and let her know that you are protecting her now — by standing in the truth, by getting help, and by expressing the things she was unable to express.

Stay the course with your therapy and be kind to yourself along the way. You’re doing an amazing job.

The information within Ask Erin should in no way be interpreted as medical advice because I'm not a medical professional. But I am here to help — to share with you the wisdom I've gained after years of making mistakes. If you have a question for me about relationships, addiction, dating, friendship, depression, sex, consent, shortcuts to accessing your woo, Chrysoprase, or anything at all, use the contact form below or email me at askerin@ravishly.com. As always, your anonymity is golden. Lastly, I’m so excited to share my Ask Erin Self-Care Guide, free when you sign up for my weekly newsletter. xoxo