Take The Cake: Where Do You Feel Safe In Your Fat Body? 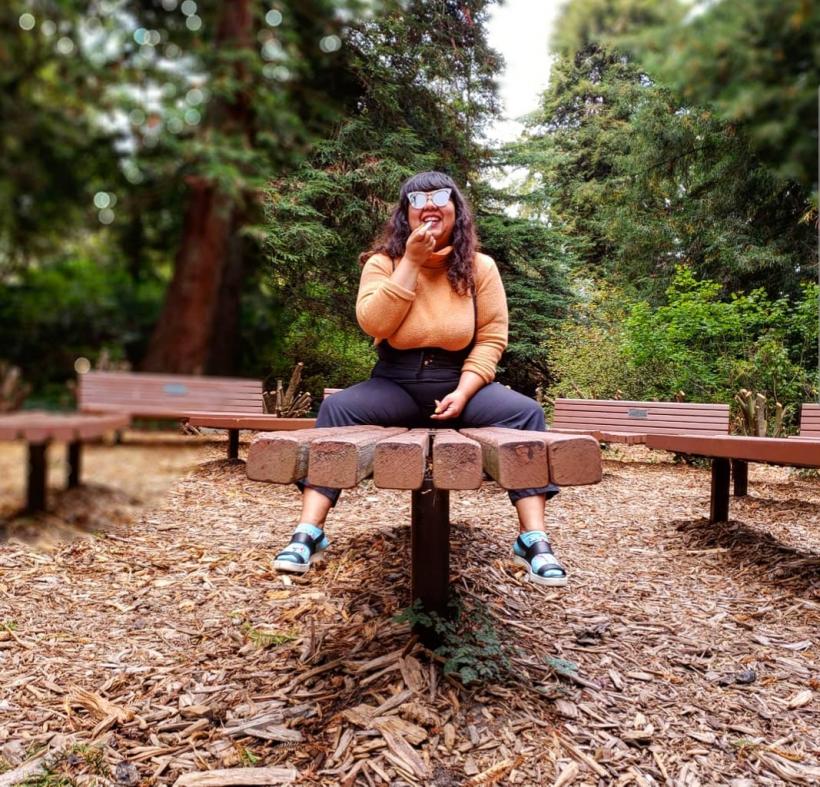 There are a lot of places where fat people don’t feel safe. Fatphobia creates a low hum of culture-wide hostility that affects how you might dress, where you might eat, who you’re friends with, and the spaces that feel good to you.

As I was walking around the blustery ocean-side outreaches of San Francisco — aka my neighborhood — I realized that I had unconsciously mapped the places where I felt safe in my fat body. I hadn’t exactly sat down with a piece of paper and drawn out a map, but I noticed my feet taking me toward certain places and away from others.

As I crossed the blocks that took me further from my apartment and closer to the strip of shops and restaurants, I felt myself cross the street to avoid the bustling brunch place that has a three-hour wait on Sundays. That place has the most tiny, uncomfortable seats and most of the clientele emanate an aura of gentrification-happy, health-trolling faux progressivism.

I found my feet jettisoning forward toward my favorite little coffee shop where my sparkling Americano is usually served by queers and girls who don’t wear bras. The baristas tell me when they noticed I haven’t been there in a while, and I tell them where I’ve been. Sometimes we talk about politics or my weird outfits or where they grew up.

I noticed that I’d quickly power-walked past the cafe closer to my place careful not to make eye contact lest I get sucked in into their ray of vitriolic hipness. That cafe didn’t have a posted menu for five years, only hired skinny white men with major tendencies toward condescension for the same amount of time, and NPR claims it started the toast craze.

I recently took a friend there out of convenience (#NotWorthIt). The woman serving our coffee is nicknamed (in my head) “Hateful Harriet” and is on my “People I Wouldn’t Save During the Zombie Apocalypse” List™. On numerous occasions she has made me and other women wait while she chatted up the one dude human in the spot about surfing or Bukowski or whatever the bro shit du jour happened to be. She scanned my friend — an elder who’s also fat — up and down with barely contained judgment. As I walked past it, my body remembered the rage and discomfort, the desire to jump across the tiny wooden counter and spit out a tiny feminist manifesto about internalized sexism a half-inch from H.H.’s face.

There was a time not so long ago that I would have fought my body on this walk. I would have pushed past the sense of emotional danger in the name of asserting my right to be in a space because I believe that certain places shouldn’t be off limits to anyone based on their body – whether it be because of size, gender, race or ability. And I stand by that belief because it’s true, but the thing is - there isn’t just one truth. It’s also true that I deserve to feel ok when I’m spending time or money or energy to do things out in the world.

So I began to think of what those places were. For me they are: libraries, my bed, any space that’s articulated as fat positive (like fat clothing swaps and fat yoga), when I’m at Terror Tuesday with a bunch of other weirdos who are obsessed with terrible horror movies, most places where witchy materials can be procured, at businesses run by queer people and feminists, in nature (especially around huge, old trees and definitely Joshua Tree), in plus size shops, in Golden Gate Park, and weirdly at Corgi Con (the annual gathering of corgis at Ocean Beach). Sometimes I find I feel safer in some places early in the morning or later in the evening, but not at their busiest times. Like the beach at 7am on a Monday feels safe, but I avoid the same beach at 1pm on a Saturday.

I asked my fat friends on Facebook where they felt safe in their fat bodies. Here’s what some of them said:

“I've always felt safe as a fat person in the library. The furniture fits better and there is a lack of judgement, probably because it's a space not dedicated to eating.”

“In my own home. I was at a suicide prevention training recently and got dirty looks from the thin social worker next to me while eating a nectarine, of all things. You bet I made the effort to eat the damn thing and *deliberately* positioned it closer to her every time I took a bite. I can mess with fatphobes and enjoy every minute of it, but it gets exhausting.”

“I feel safe in art galleries. Nice open floors with stuff safely on the walls so my butt won't knock anything over!!”

“My own home or with my other plus size sistas.”

“First class airline seats. First class train seats. Big fancy spa couches. (Maybe the rich are allowed to be fat?) A couple half examples: aqua aerobics class because body scrutiny is mitigated by the fact all you can see are folks from the neck up — I love how even the instructors can't see how rigorously we're following instructions (but getting into and out of the pool space of course, can be fraught with body policing). Also restaurants: I love how having a stranger who can't see you plating your food for you undermines the scrutiny I have felt in the domestic sphere when serving myself.”“In my own home. This is a win, as growing up, this was not the case.

“At new movie theatres with big seats. With my husband. In my car.”

“I feel safe and held in the water...lakes in particular”

“Lakes, pools, the open ocean. My body is a vessel which I trust completely in the water.”

“In dance classrooms that are centered on expressive movements and offer inclusive dance pedagogies!”

“I feel safe in my hair salon...oddly enough in front if tons of mirrors. Funny but I never really zero in on myself.”

“Whenever I'm alone. Otherwise I get this sort of double think. Whenever I'm with anyone else, I'm sort of having to both hold of image of myself that honors me, from my own perspective; but then also an image of me that I know will be what other people may see due to my weight, race, disabilities, etc. Alone I can be all of me without having to be prepared for what anyone else has to say about my appearance or ability.”

“With family (I come from a long line of fat folks). I’m struggling to think of other places, though (libraries are favourite places for me, too, but I wouldn’t identity them as fat-welcoming overall). I suppose with nonhuman friends (cats et al.) more than among any humans.”

“Home or somewhere I know the activity is led by a fat positive person, which has only been made possible recently and so far by largely leftist activists.”

“I feel safe hanging out with Juggalos. Lots of other fat people having fun, sweating, dancing, showing skin. I don't feel alone or like I stand out.”

I encourage anyone reading this to think about what your answer is.

I think it’s worth it to both feel the frustration of fatphobia-imposed limits as well as see these spaces as treasures and sources of information. What is it about these spaces that do something for your spiritual and mental wellness? What kinds of people congregate there (because these people could be your allies)? What does it feel like to feel safe in your fat body? How can you bring that knowledge to other parts of your life?

If you like this article, please share it! Your clicks keep us alive!
Tags
take the cake
Virgie Tovar
fat
#riotsnotdiets
fat bodies