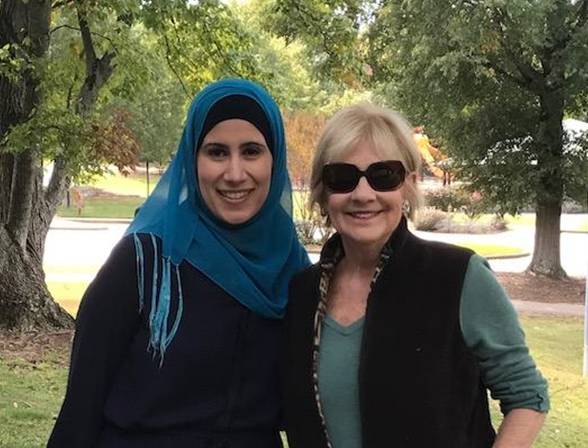 A story of friendship.

Laila, an American-born Muslim, left her home on a cloudy afternoon (pepper spray in hand) to go for a walk at a nearby public greenspace. Due to the weather, the park seemed almost abandoned that day.

The Trump administration had been weighing heavily on the mother of three’s shoulders, as were their efforts to implement a “Muslim Ban” in the U.S.

Laila, a Federal Government employee, had felt deeply impacted by Trump’s presidential win. “I was devastated after Trump won. I was in disbelief that my fellow Americans could elect someone who incited hateful, bigoted behavior and created such divisiveness. I was in a daze the next day and actually had to leave work because I felt sick to my stomach from all the anxiety and shock. I was and still am worried for the sake of my country. I can’t help but wonder as I go through my daily life [whether] someone voted for him, and if they did, how they could dismiss his bigotry?”

Laila contemplated staying home that day back in February, to use the elliptical and “watch The Daily Show take on the latest Trump debacle.” But in the end, she chose the fresh air. While she walked her circuit, an older blonde woman looked on with a friendly smile.

Her name was Becky, a retired-teacher and a Christian, and she was feeling compelled to reach out to the lone woman in the hijab. She too was troubled by Trump’s win and the impending agenda. So, on Laila’s final lap, Becky approached her and spoke what was in her heart.

"To have a complete stranger take a big leap by stepping out of her comfort zone for the sole sake of making me feel better meant the world to me.”

Becky told Laila she supported her and was against Trump and everything he represented. She said she had been calling her local congressman daily and asked what she could do to help support the Muslim community.

You Might Also Like: Banning The Burkini Reinforces A Single Story About Muslim Women: 'They Need Saving.'

Becky, who grew up in the Deep South in the 1950s, told Ravishly: “I didn’t know if my sincere sentiments would be received but felt the need to reach out. We learned the Golden Rule growing up! We were told by our parents to treat others with respect, and they never would be proud of us if we didn’t stand up for the underdog or those hurting from abuse or rejection. So my parents were wonderful role models for me.”

Laila was moved by the kindness of Becky's words. “It was reassuring and comforting beyond expression to hear someone say that they support me and condemn what Trump has said and done,” Laila said. “I know in my heart, of course, that there are so many other Americans like her. However, to have a complete stranger take a big leap by stepping out of her comfort zone for the sole sake of making me feel better meant the world to me.”

Nine months onward, Laila and Becky are friends. They walk together sometimes and they keep in touch via text. Their friendship is just one of the many positive relationships that have developed in response to Trump’s presidency.

For many Americans, the heartache and uncertainty continue — as does the conflict and anger. But this story of two strangers at a park reminds us of the value of human kindness and friendship.

We are honored to feature Laila and Becky as our Lovers & Fighters here at Ravishly, and we know they are one of many hopeful and positive unions that have come about over the past year.

If you like this article, please share it! Your clicks keep us alive!
Tags
muslim
Christian
mom
teacher
Friendship
bigotry