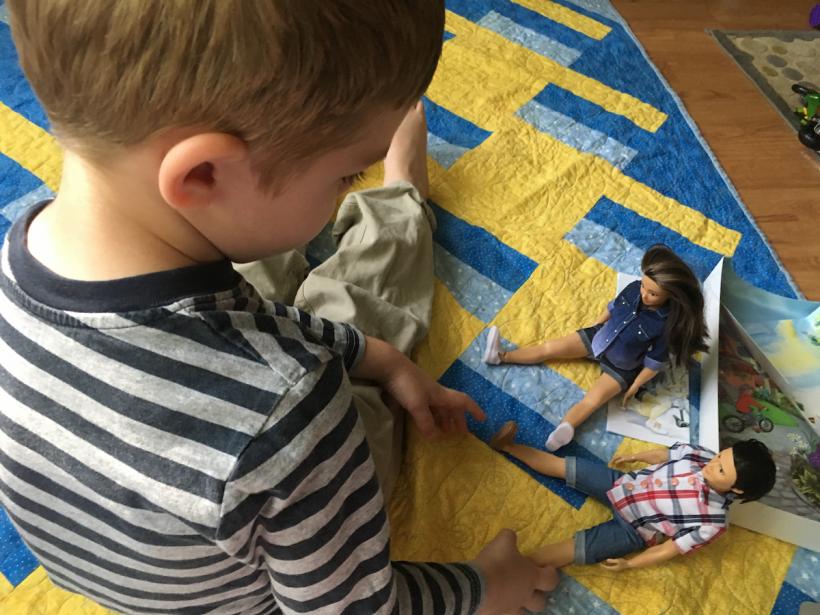 The first thing he said with a big smile was, “These aren't dolls, they are real people!” (Image courtesy of the author.)

I loved playing with Barbie dolls when I was little. My friend would bring her doll over to my house with a Caboodle case full of miniature clothes, and we would hold elaborate fashion shows. My mom even sewed some tiny little outfits for Barbie to wear. A metallic pink pair of hotpants and a denim dress stand out in my memory as favorites.

Sometimes Barbie would get lonely. Since I didn't have a Ken doll (in fact, I don't know anyone that had a Ken doll), I made my Barbie do the unthinkable: shack up with a Roger Moore doll from one of the James Bond movies. I stole the action figure from my brother's room. The Roger Moore doll was a good three inches taller than Barbie and ominously towered over her. The toy designers had him dressed up in a snazzy silver jumpsuit, which I think was supposed to represent him in the Moonraker movie, and they even included his famous mole. Poor Barbie, this giant spaceman was a far cry from her beloved Ken.

But as I got older, I realized that Roger Moore was the least of Barbie's problems.

With a little maturity, I came to regard her strange elongated neck and ridiculous proportions as yet another measure to control and contain womanhood. In fact, more than a few studies have found that if Barbie were transformed into a real-world woman in some Weird Science-like experiment, she would be severely physically disadvantaged. Her internal organs would find little space inside her tiny proportions, leaving room for only part of her liver. Her impossibly small feet wouldn’t be able to take the strain of her body, leading her to walk on all fours. Her BMI would be so low that she likely would not menstruate.

Barbie is not exactly a body-positive role model, which is exactly what Nickolay Lamm thought when trying to buy a fashion doll for his niece back in 2013. His experiences led him to experiment with measurements. Using a 3D model, he created a realistically proportioned doll based on figures taken from average teenage girls. The result was the Lammily doll.

After a crowdfunding campaign, Nickolay was able to bring his dream to fruition. I was intrigued by these dolls and their positive message of body inclusivity and decided to see what my preschooler made of them.

I received a traditional “Traveler” doll and the “Animal Rescuer” doll, a male fashion doll made with similarly realistic proportions. I told my son he would have some dolls to play with and presented him with the boxes.

The first thing he said with a big smile was, “These aren't dolls, they are real people!”

He had never seen a Barbie-type doll before, so “doll” meant baby doll, and he was very excited to see that they looked like grownups. He stroked the “Traveller” doll’s hair and said “she looks like you, Mommy,” which was almost too cute to bear. He then opened her shirt and exclaimed, “Oh wow she has breasts!”

He played with both dolls for a while before asking what their names were. I told him he could choose, so he called them Wonder Woman and Batman. I told him Wonder Woman's real name is Diana, so that stuck. As he is a big fan of alliteration, Batman became Dennis.

Diana and Dennis accompanied him to preschool. They went to the park. They got dragged in the backyard. At bedtime, he lined them up on his pillow. It’s safe to say they were a hit.

I am pretty sure he has no idea that these dolls are revolutionary or how different they are from the dolls I grew up with. For that, I am glad. They are normal to him, and that’s progress. Perhaps as he grows up in a world where toys look like “mommy” rather than an idealized version of perfection, he might gain a healthy view of women and body image. I really hope so.

Lammily dolls can be purchased at Lammily.com. Their latest accessory is the Lammily Wheelchair, the only fashion doll wheelchair on the market.

The Movies Lied To Me
Fiona Tapp

Getting In Touch With My Body Through Mermaid Lessons
Fiona Tapp