Ask Erin: How Can I Help My Cheating Best Friend? 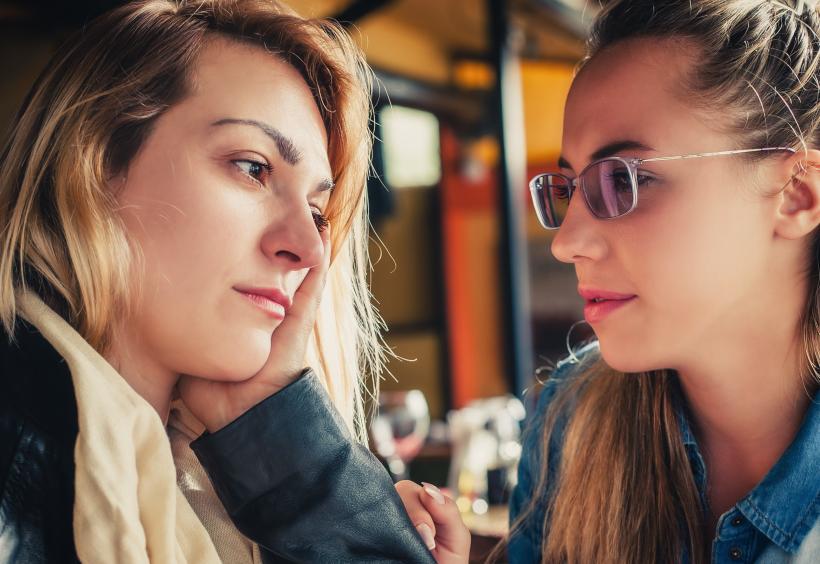 How can I be a supportive of my cheating best friend while not supporting her actions?

I'm hoping you can help me out. I've recently reconnected with a friend from primary school (which was a while ago — we went to high school in 1990). We kind of drifted apart because we went to separate high schools and didn't really live close to each other, but we still get along really well. She has developed into the kind of adult I'm friends with, and the feeling seems to be reciprocated.

We probably reconnected about 12 months ago, firstly on Facebook, and then met up for a (very long) lunch a couple of months ago. We have similar views on life, we've both been married for a similar time (13 years), and we still laugh at the same things (mostly ourselves).

However as I've got to (re)know her, I feel like I'm in a situation that is a bit over my head.

She's not happy with her husband. The main issue was the fact he wants her to move to another state, away from her job (part-time with great hours, works well with her six-year-old kid), family, and friends. This has been an ongoing, divisive, issue for probably a couple of years now.

They're (finally) in counseling together, and they have both discovered that the other one isn't prepared to compromise about moving. I'm not sure what this means for their marriage, to be honest.

Then, to add to this, she tells me that she's caught up with an old flame. Except they've more than caught up — they've 'caught up,' IYKWIM. More details continue to emerge — the sex is unprotected. She isn't on birth control (she does have a very long history of unexplained infertility, but still.....).

This has been going on for six months. He's unhappily married to his wife of 20 years. They have three kids. And so on.

I've gone from being understanding about an emotional affair to not knowing what to say when she calls herself a cheating a$$hole.

I understand as a friend that all I can do is sit and listen to this. But do I have other responsibilities? I've never even met her husband; should I be telling him about this?

I'm strongly encouraging her to be honest with him, explain that their marriage is over (which has become clear to me, as more details of the affair emerge), and to let him go. She keeps saying it would break his heart. How long is this a reasonable excuse for her (or me) to delay telling him?

In short: what's a girl supposed to do?

How can I be a supportive friend while not supporting her actions?

Thank you for any direction you can provide!!

I have been there. I have been the friend that had the information that I didn’t want to have. And it feels really crappy to have to carry around someone else’s secrets.

As I am sure you know, you have no control over her actions.

What you do have control over is the boundary you set with her.

Let’s address a few of your concerns here. First, the husband. You’ve never met him. You are under no obligation to tell him anything or get involved. This is her marriage, her mess. You are not responsible for any of it. So, relieve yourself of that burden right now.

As for her excuse for not telling him — it’s irrelevant. It’s not your job to decide when or how she should tell him. That’s on her. It’s unfortunate. I know sometimes it feels like we want to take people by the shoulders and shake them a little and say “wake up!” But, she’s going to have to get there on her own. But, as I said, you don’t have to be a party to it or feel that you are duty-bound to someone you have never met (her husband).

So how can you be there without condoning her behavior?

Tell her that you care for her and will be there for her as a friend, but that when it comes to this subject, you can’t take part. It makes you too uncomfortable. You’ve given her your opinion and advice, and you think that beyond that, it should be a closed subject between you two until she is ready to clean up her side of the street.

But, you don’t owe anyone solidarity in the face of behavior that makes you feel uncomfortable.

It is possible to remain friends and be supportive without backing up actions that don’t feel right to you.

The information within Ask Erin should in no way be interpreted as medical advice because I'm not a medical professional. But I am here to help — to share with you the wisdom I've gained after years of making mistakes. If you have a question for me about relationships, addiction, dating, friendship, depression, sex, consent, what I’m watching, what I’m reading, Natrolite, or anything at all, use the contact form below or email me at askerin@ravishly.com. As always, your anonymity is golden. Lastly, I’m so excited to share my Ask Erin Self-Care Guide, free when you sign up for my weekly newsletter. xoxo