Ask Erin: I’m The “Other Woman” And I Need Advice 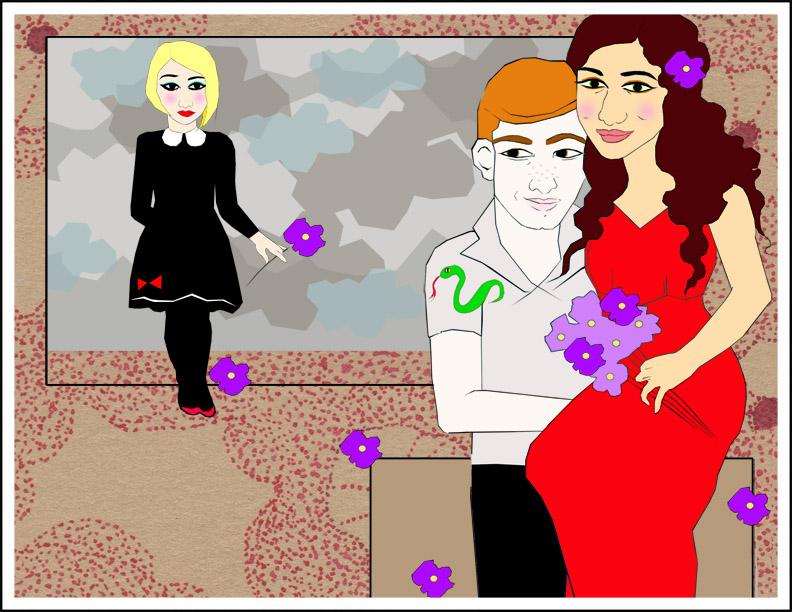 My dilemma is that I don’t know whether or not I should let her know. (Artwork: Tess Emily Rodriguez)

A couple of years ago I met this guy at my office, and we hit it off pretty quick. We started flirting which led to hooking up casually and sometimes going on mini dates afterward. I ended up moving about an hour away, and we continued to sext/send nudes and even hook up whenever we were in each others area, but then things got weird.

He started blocking and unblocking me all the time on his social media when I didn’t respond to his booty calls right away. We ended up hooking up again, and I asked him if he was seeing someone, and he said he was talking to a girl, but they weren’t official, which I took as an okay to keep doing what we were doing because he said he wasn’t committed to her. And then I found the next day through a friend that not only was he officially with this girl, but they were also practically living together.

It’s been almost a year since I found that out and while I haven’t confronted him on it, he hits me up a lot, and a mutual friend between his girlfriend and me has told me that his girlfriend has no idea about me and his frequent cheating.

My dilemma is that I don’t know whether or not I should let her know.

On the one hand, I really want to have her back girl to girl, and because we all have mutual friends between the three of us, I don’t want her to get misinformation (such as thinking that I knew about her when I had hooked up with him). I also want to do the right thing morally. Plus, I’m not scared about losing him from my life because he hasn’t really contributed much to it nor am I that close with his social circle. But on the other hand, I feel that I should just leave it be and hope that karma will take care of things.

In full transparency, I do have some feelings for him, but I know it’s mostly based on lust. I just actually feel really bad for her when I see her posting about how great he is and stuff when I know she has no idea that he’s a chronic cheater (there are other girls beside me too).

Any advice for me?

You Might Also Like: Ask Erin: I'm In Love With My Best Friend, But He Has A Girlfriend; What Do I Do?

I often advise people to stay out of getting into the mix with other people’s relationships. The reason being — psychologically it’s complicated and more painful to get that type of information from someone you don’t know, particularly when that person participated in the infidelity. But, in this case, her boyfriend is a chronic cheater (you mentioned other women), and from all accounts (your mutual friends) she doesn’t know this.

I think you should tell her that her boyfriend has been cheating on her.

So how to proceed? I would get her email address from one of your mutual friends. Write her a thoughtful and kind email — one that doesn’t give any unnecessarily hurtful information but lays out the facts, much as you wrote them to me. My caveat is that by reaching out to her with this information, you are potentially inviting more drama into your life, and you need to be prepared that she may not believe you and/or displace the blame entirely on you.

I was in a relationship with a chronic cheater. I caught him/found out repeatedly, even confirming with one of the women who he cheated on me with when we confronted him together (he’d been lying to us both). Even after that, it took me a bit longer to believe he was really that bad, to comprehend that he wasn’t going to change, and to untangle myself from that mess.

Cut your ties with him.

His behavior is not the behavior of a healthy person. There are plenty of people out there with whom you could have casual sex (or an actual relationship) who are not cheating on someone to do it.

Lastly, you acknowledged that you might have some feelings for him, albeit they are blurry and mixed in with lust. Participating in infidelity is not the mark of healthy self-esteem. I speak from experience. I have been the “other woman” too. I thought that I was a strong, sexually liberated young woman. But really, I had low self-worth. Before you jump into your next relationship or hook-up, please take some time to invest in yourself.

What does investing in yourself look like? Talk therapy, focusing on yourself and what you want and need want from a partner, self-care, goal-setting, volunteering, spending time with people who make you feel good, and last but not least learning to set boundaries.

While there’s absolutely nothing wrong with casual sex, you are worth more than being someone's booty call.

The information within Ask Erin should in no way be interpreted as medical advice because I'm not a medical professional. But I am here to help — to share with you the wisdom I've gained after years of making mistakes. If you have a question for me about relationships, addiction, recovery, friendship, sex, consent, what I’m putting on my lips, Sugilite, or anything at all, use the contact form below or email me at askerin@ravishly.com. As always, your anonymity is golden. Lastly, I’m so excited to share my Ask Erin Self-Care Guide, free when you sign up for my weekly newsletter. xoxo

If you like this article, please share it! Your clicks keep us alive!
Tags
Ask Erin
The other woman
cheating
infidelity
booty call
advice
relationship advice