Ask Erin: I'm In Love With My Best Friend, But He Has A Girlfriend; What Do I Do? 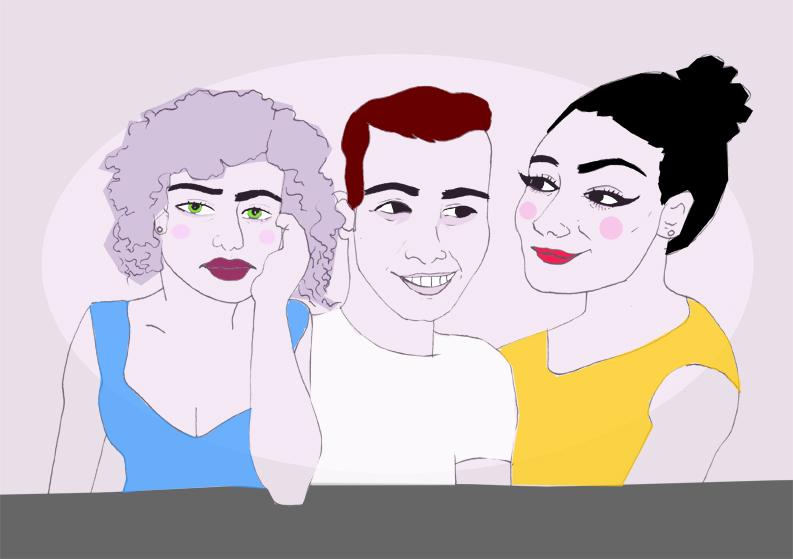 I'm in a situation, and I just have absolutely no idea what to do! I would greatly appreciate your help as this is just eating me up.

My best friend T and I have known each other since high school (just over 12 years now) and have been super close ever since. When we met, I was dating one of his best mates, but when we broke up T and I continued to constantly hang out.

We have both been moving around the world separately during the last few years, but every time we finally get to meet again and catch up it feels like the world stops (sorry for the cheesiness!). He is one of the very few people I feel like I can relax with, and he means the world to me.

Almost every time we hang out, we always end up sleeping together (not having sex, nor making out), just lying there holding each other in our underwear. I always figured we just had a very close friendship, but lately, I've realized that I've always felt more.

Since high school, my friends have told me that T has had a crush on me, but I never took it seriously as I thought they were just messing with me. During the last few years, I feel like he has hinted it but has never actually clearly said anything to me about it. For example — taking care of me when I'm sick, telling me I'm the best person in the world, wanting to hold me a lot, telling me I'm beautiful, his favorite person, etc.

For the last two years he has been dating a girl, let's call her Anna, but every time I ask about her or her name comes up he has just been telling me that its nothing serious, that he's not interested in her, and that he wants to end it. Then he always asks me if I'm seeing anyone, and every guy I date is never good enough. "You deserve better.”

But as he and Anna now live together (she's moved here from another country for him), I really feel like he's been lying to me about his feelings for her — especially since he calls me when he's drunk, saying that he only wants to sleep with me and that he thinks he and I should spend more time together. Things have escalated a lot lately.

The more time goes by, the more I realize that I feel more for him than I've ever felt for any of my exes (all long-term relationships), and I can't imagine a life without him in it. I think about him constantly, and as we now live in the same city again, all I want to do is see him. His girlfriend doesn't let that happen much and we mostly just see each other when with mutual friends (don't blame her, I think she might notice that I like him even if I try to hide it) and I really want to tell him to get it off my chest even though it terrifies me, but I don't know if that is the right thing to do.

His girlfriend is super nice, and I feel it would be mean to tell T how I feel as this may ruin Anna’s relationship with him. But at the same time, if both me and T have been walking around for the last 12 years secretly wanting to be together, I feel like I want to give that a chance! I don't want to spend the rest of my life wondering what would have been, but I don't want to put him in a difficult situation either.

Really don't know what to do! Any tips? I need your help!

Obscurity is not serving you well here.

Things are hella murky. Suppressing these feelings and pretending that you’re “just friends” and then spending the night cuddling in your underwear is not healthy for you, for T, or for Anna. I am 100% sure that I would not be okay with my partner sleeping with his female friend, holding her, in his boxer briefs.

The first thing that needs to happen is an open and honest conversation.

If I were you, I would lay my cards on the table. I would tell him how I feel and open up that dialogue. Sure, all that sexual tension can be fun for a minute, but after years of this, it will be a relief to get it all out in the open.

Let’s play this out. If the feelings are reciprocal, he owes it to you and to Anna to make a decision and act accordingly — meaning don’t act on those feelings until/unless he breaks things off with her.

If he does not feel the same way you do, then you need to create a boundary, one that precludes cuddling in undies and other confusing behavior. And you may find that you need to back off this friendship for a bit, to recalibrate. Getting yourself in a situation in which you say you're fine with being friends but really aren't is a recipe for disaster.

Another point to consider: He may like this murkiness because it allows him to get affection and validation from two women without technically doing anything wrong. But, make no mistake.

What he’s been doing with you is a form of emotional cheating — insidious and mercurial.

This has made it easy for him to skirt responsibility here. And whether or not he’s conscious of it, he’s playing with the emotions of two women.

This situation will require you to be honest with him (and more importantly, with yourself) and be firm in setting boundaries. I know you are afraid of losing him, but you don’t really have him now as a friend or lover. He’s somewhere in between, and that’s an emotionally dangerous place to be.

The information within Ask Erin should in no way be interpreted as medical advice because I'm not a medical professional. But I am here to help — to share with you the wisdom I've gained after years of making mistakes. If you have a question for me about relationships, addiction, recovery, friendship, sex, consent, what I’m reading, Bloodstone, or anything at all, use the contact form below or email me at askerin@ravishly.com. As always, your anonymity is golden. xoxo