Ask Erin: Help! I'm In Love With My Best Friend 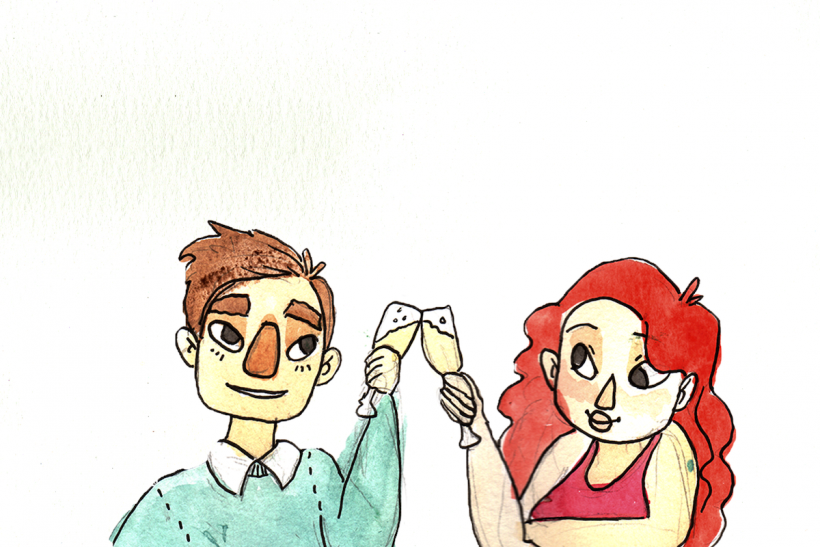 "I'm falling in love with him." (Image: Mariah Sharp @MightyMooseArt)

A little backstory to my best friend and I...

He and I have known each other for about 13 years now. We’ve had times on and off when we weren’t speaking — the normal as you age through your 20s.

The past two years, we’ve reconnected and are closer than ever. We spend multiple evenings a week together, at dinner and drinks or just hanging out. It’s never gotten physical, but we do hug and kiss each other on the cheek goodbye. I know we’ve been mistaken for being together and he’s had no issue with it.

Now we’re talking about taking a trip to Mexico in March, sharing a studio hotel room with one bed — something I’ve brought up to him and he has no issue with.

I’m falling in love with him, and I definitely feel that he may feel similarly. My question is more based on what do I do to move forward? I am loving the natural progression we’re having, but I don’t want to miss the window either.

Thank you!
Your Ravished Reader

I feel for you. I have been on both sides of the having feelings for a friend coin.

There’s no way to figure out what he’s feeling or thinking until you are honest with him about your feelings. Which, I know, is scary. But, the healthiest and strongest relationships I’ve seen are built on honesty.

I don’t at all subscribe to the belief that you have to play any games to catch a significant other or that you need to hold your cards close to your chest. (Side note: I apologize for my overuse of metaphors in my answer today!)

In my experience, when someone is feeling you the way you’re feeling them, it’s not going to fall apart because you told them you had feelings first.

You won’t mess up the natural progression by allowing yourself to be vulnerable in front of him.

So, in that sense, you have nothing to lose.

When my husband and I first met, we were friends for a bit, but I felt a real draw to him. I told him how I felt, and he said he felt something as well, but he thought we’d be better off as friends... because I was “his worst nightmare” in terms of dating.

Yeah. Let that one sink in for a minute. To be fair, I had disclosed my messy dating history — but ya’ know, still!

Anyway, we started dating ten days later, got married, and have now been together for six-and-a-half years.

My point is — if it’s meant to be, you’re not going to muck it up by telling him how you feel. I think you should do it. Tell him.

BUT…my one caveat is that you need to be prepared that he might not feel the same way, and you should gauge how you might feel about that. Will you be able to stay friends with him? Is the friendship more important than a potential romantic relationship?

I know this is risky, but the greatest gifts in life always involve risk.

There’s a line I always think of from a Jeanette Winterson book that I adore called The Passion: “What you risk reveals what you value.”

Now, that can be interpreted all sorts of ways, but how I see it as that you have to be willing to risk the friendship to gain something that could be even bigger and better.

And, if it doesn’t pan out the way you wish, I promise that there is something even better in store for you. When I’ve been in a situation where I didn’t get what I wanted — be it a relationship or a career opportunity or something else — invariably I end up with something better for me in the long run.

Trust in that. You have nothing to lose.

If you have a question for me about relationships, addiction, recovery, friendship, consent, Dravite, or anything at all, use the contact form below or email me at askerin@ravishly.com. As always, your anonymity is golden. xoxo

If you like this article, please share it! Your clicks keep us alive!
Tags
Ask Erin
Friendship
dating
Relationships
relationship advice
in love