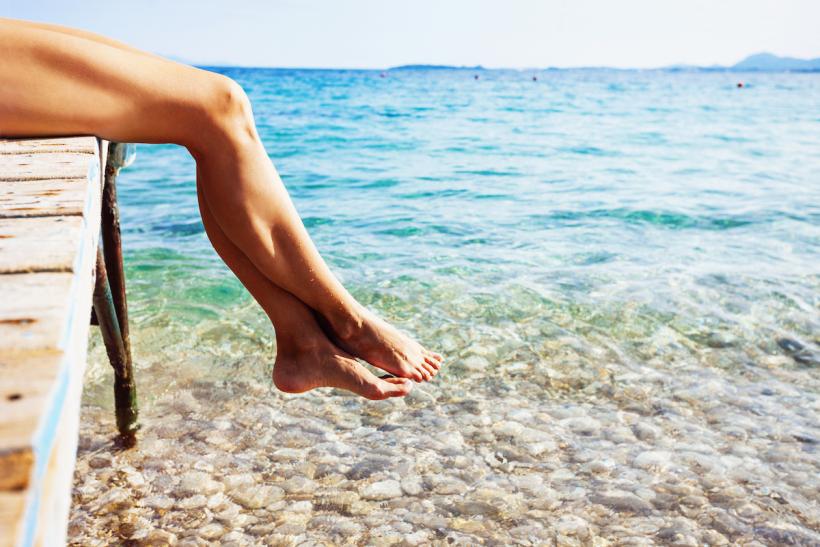 On the beach, my German in-laws and husband undress quickly and efficiently, without making any effort to hide. Meanwhile, I am performing back-breaking acrobatics to hold my towel in place while simultaneously removing my clothes and then trying to put on my swimming suit. It takes forever and is not exactly comfortable, either — but what can I say, I’m a prude. I’ve always been.

I am the type who, when she finds herself in a communal dressing room, panics until she finds a toilet or any place to hide and then change. I never like to show skin. I feel most comfortable in my usual jeans and long-sleeve t-shirt combo. When a few friends and I planned to go to a spa place together, guess who chickened out when she found out it was nude day at the spa? Yes. Me.

Of course, you may say that I have body issues. That the patriarchy makes me uncomfortable with my body. Or that the culture I come from (Eastern European, traditional and Catholic) is not on board with women being self-assured and loving themselves. And that is a worldwide problem. You can’t just ignore centuries of female oppression, so it’s a good idea to talk about the importance of body acceptance.

But, while I was raised in one culture, I’ve also lived — as a child and later as an adult — in countries where nudity is a normal part of life.

In Germany, there is the FKK movement. FKK stands for Freikörperkultur (free body culture) and refers to nudist-friendly spaces. In the Netherlands, as in many other European countries, there are designated nudist beaches. In Italy, it’s common to go topless. A while back, we were at the beach, and four people — two men and two women — arrived, got completely undressed, and went for a swim. Just like that.

All that to say, I’ve seen my share of naked bodies. I am glad that there are spaces where people can feel comfortable disrobing, and when we pass through such a beach, I find it normal. I simply have no desire to join them.

"The more of my body I open up to the world, the louder and the more exhausting everything gets."

A while back, I read an article called “Your Lack of Nudity Is Hurting Us All.”  The writer makes valid points about nudity leading to more body acceptance, and about seeing bodies that are just like yours. It’s important.

But how can I say that my body is really mine when I’m supposed to show it to my children so that they’ll learn what a “real” woman looks like, or to other women so that they can learn they’re not the only ones with stretch marks on their bellies? And besides, aren’t there enough bodies like mine (white, small, and thin) out there?

But to be honest, my reluctance to get naked has nothing to do with personal preferences or the way I feel about my body. It has everything to do with how my body feels about the world.

To start with, there are my sensory issues. Everything screams at me. Hi, it’s me, sand! Look at me, I’m so sandy and grainy, and I’m so different when I’m dry or wet! And I leave your skin feeling gross! That breeze everyone loves? It’s not that pleasant for me. Not to mention other things and people on the beach. There is lots of noise too. Adding nudity to that would be too much.

You may wonder why I go to the beach in the first place if I hate it so much. Given that I live in a city that has 11km of sandy beaches, it seems like an obvious choice. But mostly, there is one thing that makes it all worth it: the water.

Maybe, because of my balance issues, and the general feeling or rootlessness I carry around in me, the water is the one element that actually mirrors what I feel. Air offers no resistance. Matter offers too much. But water is just right, covering me like a blanket and allowing me to move in a graceful way. Maybe I was a mermaid in a former life. And I just happen to like my water cold, which is very fortunate since I don’t like many other people around me when I swim.

When you understand this, maybe it’s easier to comprehend my reluctance to undress. The more of my body I open up to the world, the louder and the more exhausting everything gets. So when I cover up while changing for the beach, it’s not simply out of modesty. It’s deciding, how much of the world am I willing to take on at this moment. And while I have no problems running around near-naked (in a bathing suit, for example), most of the time I’d rather remain clothed, thank you very much.

It’s so easy to assume that if a woman wants to cover up, she is doing it because of patriarchy.

But even if she does, there is the expectation that going naked will magically cure all self-esteem issues, and that women will start feeling more comfortable with themselves. That they will instantly go from people who hate their bodies to people who love their bodies. But that’s not really how it works. Most women have been told that they shouldn’t be showing too much skin (or too little skin, it’s very confusing) for so long, that it would take a while to unlearn all the mixed messages we've juggled our entire lives

Personally, I love that countries like the Netherlands offer everyone a way to feel good about their bodies, to dress (and undress) as they please. Dutch women feel very confident in their skins, and when they dress, they mostly choose comfort over looks.  So, if I wanted to, I’d find plenty of role models for feeling good about myself.

I believe everyone should feel confident about their bodies. And while for some it can mean getting naked, for others it can mean covering up. And that's just fine by me.

If you like this article, please share it! Your clicks keep us alive!
Tags
nudity
body image
summer
self image
Europe
Travel
vacation
swimming