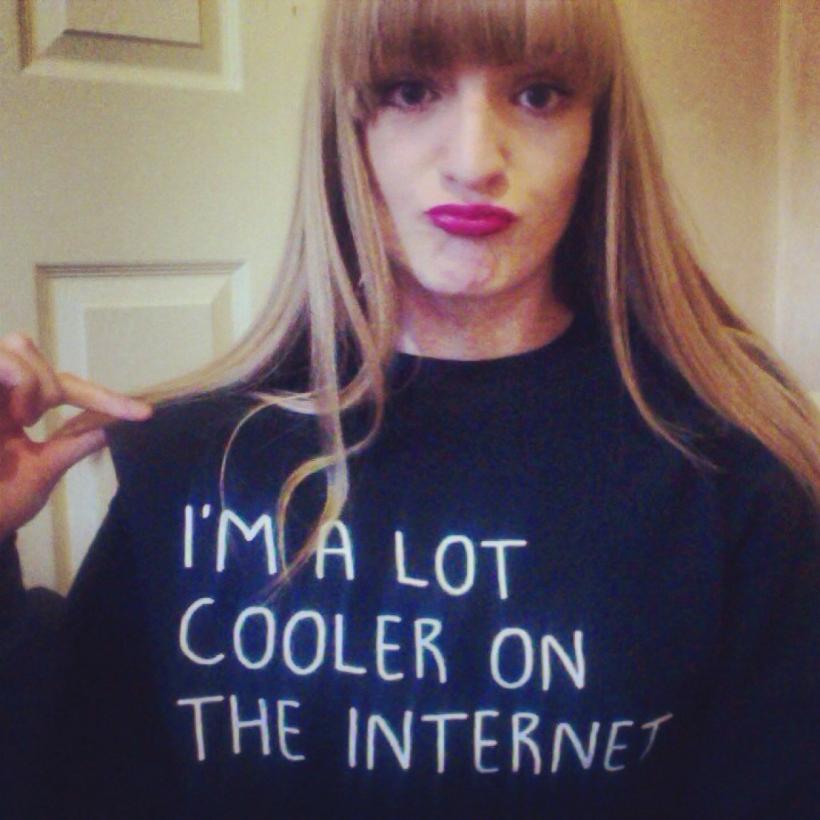 In her Twitter avatar, Rossalyn Warren boasts a T-shirt that claims she’s “a lot cooler on the Internet”—but I’m not buying it. I think to not only have broken into the notoriously-tricky-to-bust-into media world, but to also have excelled in it so seamlessly, one has to possess a certain inherent coolness.

What do I mean by “seamlessly excelled”? Oh, just that Warren has had wildly successful stints working in marketing, then at Upworthy and now, finally, at the exploding BuzzFeed UK shop . . . and she hasn’t even rung in her 25th birthday.

From the Oscar Pistorius trial, to 20 London students speaking about why feminism matters, to a “kiss-in” protest against a store’s homophobic acts, to a Southampton student who, in her inebriation, got her head stuck in a recycling bin, Warren covers it all—and with humor, depth and creativity.

So while she’s the one curating a badass women Twitter feed, were we cool enough to have been the one to kick it off, she’d definitely be prominently featured. Which is why we’re stoked she was kind enough to offer up her thoughts on the evolving media landscape, women breaking into journalism, and what, exactly, constitutes a badass.

So you're currently kicking ass and taking names at BuzzFeed UK News, but you're formally of Upworthy. Can you talk a bit about your career trajectory and how you landed at the cutting edge of this new media landscape we find ourselves in?

It hasn't been a direct route into media: I started interning/working in the arts, then charity, then marketing, but throughout I've always been a bit obsessed with the Internet and had a keen interest in media. I was drawn to both Upworthy and BuzzFeed for their way of telling the news differently and for their understanding of how stories share online, and moving into that type of new media felt like a natural fit.

What interests you about the media biz? Any thoughts on how it's changing?

I'm excited to see changes in media, particularly creative approaches to storytelling, different formats and tools to help report news, and trying out new social media platforms. A lot of sites are stuck in their old ways and push back on adapting or trying new things, and it's preventing them from reaching a new and larger audience.

To say you cover a range of topics feels like an understatement. From a woman using a Facebook campaign to track down the men who'd attacked her to the Oscar Pistorius trial to the age-old question of whether ginger men can be sexy, there seems to be no limits to the breadth of your beat. What's the process like for choosing what you write about?

Haha, yes, I cover a wide range of things. My work background means I have a big interest in women's rights, so I often cover news about inspiring, brave and cool women as I feel it's important for girls and women to see themselves portrayed in a better light in the media. Then in regards to breaking news or big stories, I jump onto a story and cover it when it's needed or if it's important. Mixed in with those kinds of stories are the uplifting or sillier things that I stumble onto on Tumblr or somewhere and that make me laugh—those posts are always a lot of fun. I don't think there needs to be a divide between hard news and entertainment; you can certainly have both. I don't believe in guilting readers for wanting some light relief, which is why I'm pleased I can cover such a wide range of stories.

Are there issues you are most passionate about? Ones that are difficult to write/report on?

I'm certainly passionate about reporting on human rights and world news. While at university, I set up a website called Article 27 dedicated to reporting on the creative ways people were promoting human rights around the world, through things like photography or film. We got to interview Academy Award-nominated documentary directors and report on the Human Rights Watch Film Festival for two years too, which was great fun. it goes without saying that those kinds of stories are more difficult to report on than the fun Internet stories I report on, but framing those world stories in an accessible way for an audience is a challenge I enjoy.

Do you perceive any huge differences between media in the U.S. and in the UK?

To be quite blunt, both countries have a lot of work to do to address the sexism, racism and homophobia that are surprisingly still rife in their media coverage. Having said that, I think both countries are improving the breadth of their coverage, telling the stories of people who are under-reported and amplifying the voices that are rarely heard. On a lighter note, both countries have an strong commitment to reporting on Benedict Cumberbatch, which I appreciate greatly.

Media is a pretty male-dominated industry . . . what's it like to work in the field and inject a little estrogen into it? Do you face any backlash for claiming the feminist label [insert obligatory fist-pump here]?

Haha nope, I'm always proud to call myself a feminist and most people in my industry support feminism. You get a lot of mansplaining, especially on Twitter, but nothing that a sarcastic subtweet can't handle.

And yes, it's a male-dominated industry. Mainstream media is mostly white, straight men, which is a big problem because they then cater the news for an audience that looks and speaks like they do, and they don't do enough to reach outside of that circle. Thankfully, badass women are changing that in the ways they can—but we need more women to be confident enough to step up and not be afraid to apply for the jobs men are, or asking for the raises men are, or for asking for a promotion like men are. But we're getting there!

I'm a huge fan of your "badass women alert" Twitter feed. Did anything in particular inspire it? Do you hold any particular definition of "badass" dear?

Thanks! I created it because I kept coming across stories where I'd sit there and say "yaaaaas that woman is such a badass for doing (inset cool thing here)" and I realized there wasn't really a place to have all those badass ladies together. So I made the account to keep track of all the women I'm inspired by on a daily basis. My definition of "bad ass woman" is basically a girl or woman doing something cool, against the norm, in confidence, with pride, in defiance, or without fear. Mix Malala with Rihanna with Roxane Gay with Amy Poehler, and that is basically my celebrity badass woman.

Any advice for those yearning to break into media—especially, perhaps, for ladyfolk?

First, hustle hustle hustle. It goes without saying, but do what you can to make connections with other women in media. Don't be afraid to tweet or email them here or there. Sometimes people reply, sometimes they don't, do not take it personally—for example, I am terrible with replying to emails, but if you tweet me a link to something on Tumblr, I'll read it. It's difficult as a lot of job opportunities in media are poorly paid internships, or worse, no pay. I understand that pain, so my advice is to work somewhere to keep yourself financially stable, but in the meantime build up your portfolio in every way you can: an active Twitter account where you talk about and share news that interests you, a great Tumblr page, a "side hustle" project of some sort. I'm a big believer in working on things on the side as much as you can until you have enough to show an employer "hey look, I am a great writer/blogger/tweeter/developer/editor, hire me now."

I recently spoke to a lot of teenage girls trying to break into media, and time and time again I see their self-doubt, so my biggest piece of advice is to not think twice about being good enough. How often do you know men sit there and say, "oh, I'm unsure, I don't know, I'm not good enough for that." They don't, and that's why they go for the better jobs and ask for more. So ladyfolk, please stop downplaying your talent.

Do you have any new projects coming down the pipes? Where can we keep up with all of your, dare-I-say badass, work?

Well I have a lot of things I want to report on for BuzzFeed, and I hope to experiment with new formats and such, so that will be fun. I'm starting to dip into doing some more public speaking, which I don't really enjoy, but it's a good challenge to suck it up and try anyway. I turn 25 in a few weeks, so at that point I'll try and set myself some new life goals and see how they turn out—but in the meantime, follow me and my ramblings on Twitter!