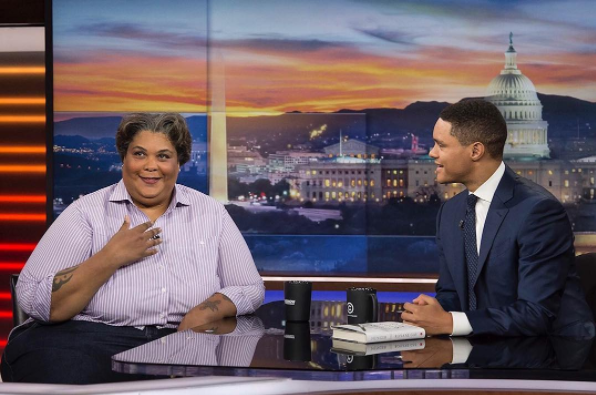 The problem of some women excluding other women from their feminism is not new: you need look no further than SWERFs (Sex Worker Exclusionary Radical Feminists) and TERFs (Trans Exclusionary Radical Feminists). I object both to the practice of excluding sex workers and trans folks, and to characterizing any feminist who does so as “radical” unless we’re saying that it’s radically terrible behavior. Although not given an acronym, racism has also been and still is a huge problem in feminism.

There’s another common exclusion of these so-called “radical” feminists, and that’s fat women. The exclusion of fat women works differently than that of trans women and sex workers in that it’s less direct…more subtle. It comes in forms like concern trolling of fat women (ie: responding to demands for respect and accommodation with unrequested non sequitur hand-wringing about our health), lack of representation of fat women, diet and weight loss messages that suggest that a thinner body is a better body in feminist spaces, and push-back against feminist spaces that don’t allow diet and weight loss talk.

And, in the recent failure by Mamamia in its interview of Roxane Gay, the refusal to accommodate fat women, and the failure to treat us with respect.

Roxane Gay is an author, feminist, fat, Black woman who was in Australia as part of her promotional tour for her upcoming memoir Hunger. You may also know her as the brave, principled author who pulled her book from Simon & Schuster in protest of them giving a book deal to professional troll Milo Yiannopolis.

Mamamia bills itself as “Australia's largest independent women's website.” Mia Freedman is the co-founder and creative director. She is a thin, white woman who has a podcast on the Mamamia network called “No Filter.”

Prior to Ms. Gay’s interview, her publicist called ahead to ask about navigation and accommodations. This is a call that becomes all too familiar to fat people — often restaurants and doctor's offices don’t bother to accommodate fat people, so the idea that a podcast might not have a suitable chair is not, like, out of the question. (I’ll note that it’s also a call that disabled people often have to make – even in spaces noted as “accessible.”)

Freedman decided that her best move would be to break confidentiality to let people know how very put-upon she felt to have to make accommodations that she should have made in the beginning: 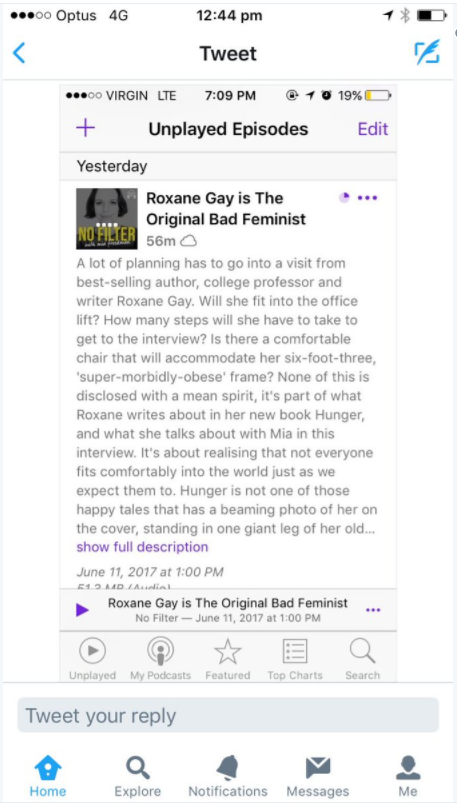 “A lot of planning has to go into a visit from best-selling author, college professor and writer Roxane Gay.”

Let’s be very clear, this "planning" is happening because Ms. Gay has to assume that, despite that fact that everyone involved in creating the space where she is going is aware that fat people exist, it’s possible that absolutely nobody even considered fat people in the development of the space.

“Will she fit into the office lift? How many steps will she have to take to get to the interview? Is there a comfortable chair that will accommodates her six-foot-three “super-morbidly obese” frame?”

What this does, besides being fatphobic and ableist, is to place the blame on Ms. Gay’s body rather than on things that aren’t made to accommodate her body.

“None of this is disclosed with a mean spirit, it’s part of what Roxane writes about in her new book Hunger, and what she talks about with Mia in this interview. It’s about realizing that not everyone fits comfortably into the word just as we expect them to.”

One has to wonder what they would have done if they had been trying to do it with a “mean spirit.”  This is also not, in any way, in keeping with Hunger, in which Ms. Gay writes:

“When you’re interviewing an international guest or someone very famous, there are always logistics to be organised.

But Roxane Gay’s requirements were different. I’d estimate there were more than a dozen exchanges back and forth between my producer and her people and the details of them both broke my heart and opened my eyes.”

I guess she wasn’t sure that she had done enough to other Ms. Gay, so she really wanted to drive the point home. You’ve also gotta love how she takes this opportunity to center her experience and feelings as a thin white woman who is ignorant to her privilege and the experiences that others are dealing with. In truth, she is responsible for her own eyes, and if she had bothered to read…oh, I don’t know…ANYTHING written by the many people out there writing about fat acceptance and done her homework about accommodating a fat guest, she might not have had to have all of these “heartbreaking” conversations.

“You see, Roxane Gay is……I’m searching for the right word to use here. I don’t want to say fat so I’m going to use the official medical term: super morbidly obese."

The use of “super-morbidly obese” is wildly inappropriate — not just because Ms. Gay had indicated that her adjective of choice is “fat,” but because the pathologization of body size is fat shaming and used as a dangerous underpinning for all manner of oppression of fat people.

This activates my throat punch reflex. If she didn’t want to say "fat," then she wouldn’t have.  And “super morbidly obese” isn’t a medical term. But the point here is that Ms. Gay has made it very clear that she prefers to be called fat. Mia decides that she would rather use a term that makes herself more comfortable, which is the issue that underlies every other problem here: a complete and total lack of respect for another person's comfort and, ultimately, humanity. And that lack of respect is how Mia can include a fat woman on her podcast while still excluding fat women from her feminism.

If you like this article, please share it! Your clicks keep us alive!
Tags
fatphobia
mamamia
roxane gay
TERFS
feminism
intersectionality