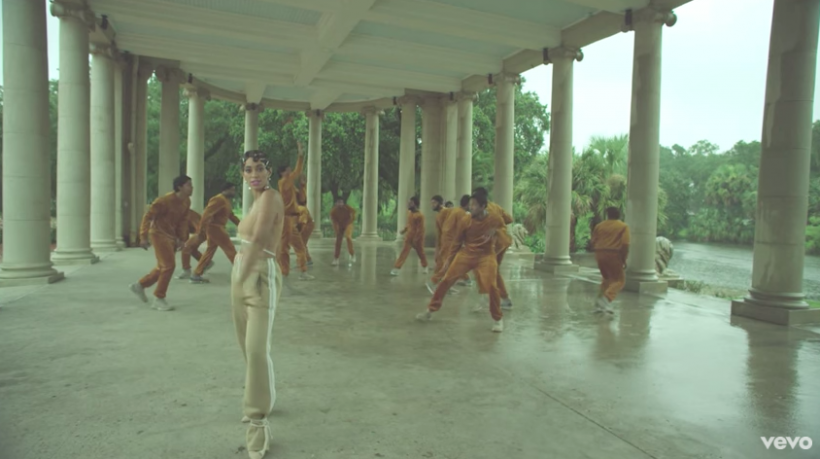 Screenshot from "Don't Touch My Hair" music video by Solange

Last year, Solange wrote an essay that felt like a church revival testimony. It breathed power into the truth that many Black women experience while navigating white supremacy on a daily basis. Even when our unarmed children are gunned down on video by police officers, this world has “a hard time contextualizing Black women and men as victims.”

This year, in collaboration with the Red Bull Music Academy, Solange re-invented the Guggenheim Museum and blessed us with “An Ode To.” This phenomenal interdisciplinary creation was a work of living art that she composed, choreographed, and directed. It was a show that perfectly complimented her Grammy-winning album A Seat at the Table. The reconstructed music arrangements continue to lead postmodern art discussions as well as critical race theory conversations around the world.

Black women are often made to feel that we are a liability rather than an asset.

Every generation has mothers who express their desire for babies with good hair. Every generation is plagued with internalized racism. Every generation is faced with our own version of forsaking Black women. Solange is the antithesis of that mental colonization. Reclaiming our identity has been an ongoing battle since the onslaught of slavery. The predominantly white spaces that we survive in can only continue to exclude us if we allow it through our continued lack of sisterhood.

The Guggenheim Museum, like most white spaces, has long represented the apex of culture — as opposed to Blackness, which is often criminalized for simply existing. This pushes the false default of whiteness. The Guggenheim has no Black women on its executive cabinet, which is the deciding body of the museum’s programs and projects. (In case you’re wondering, there are no Black men either).

This makes Solange’s “An Ode To” even more significant. Her music is also a reminder that unless and until we challenge the presumptive dominance of these spaces there will never be a seat at the table. Solange is Black womanhood personified. Much like her song “Cranes in the Sky,” her Artistry has served as a place for refuge for Black women. In an interview with her sister she once said “our mother always taught us to be in control of our voice and our bodies and our work and she showed us that through her example.”

"There is a certain intrinsic motivation behind her lyrics that calls from us to continue speaking out against injustice. Her words are intentional and spiritual."

Testimonies from the Table was expressly inspired by Solange’s “A Seat at the Table”. The project explores the narratives of 61 Black women in the U.S. Its creation was a response to the Guggenheim “An Ode To” performance. The beautifully raw images of a diverse range of Black women represent her ability to make self-love contagious.

One organization, Black Girls Break Bread, was created to ensure that Black women have safe spaces to discuss racial discrimination and solutions. This Chicago-based group, founded by three Black women, is primarily focused on intellectual development and mental health. Its genesis stems from Solange’s work.

Wake Forest University scholars designed a feminist course syllabus based on lessons from Solange’s A Seat at the Table. Mankaprr Conteh, one of the curators of this brilliant collection, has written about protests, the failures of intersectionality, and a reading list for surviving President Trump. Professor Brittney Cooper, co-founder of the Crunk Feminist Collective, used this syllabus to explore the diverse ways Black women express liberation. Nikki Billie Jean’s perfectly masculine Les Sapeurs line was also inspired by the original Sol-Angel. Even Kelly Rowland gives Solange credit for teaching her to demand respect when people would rather you lay down and take their abuse.

Her words have been a driving force for so many of us. Our voices as Black women have been largely dismissed and replaced with the “angry Black woman” narrative to diffuse our power. Solange spoke to this directly when she said that, “When Black women try to have these conversations, we are not portrayed as in control, emotionally intact women, capable of having the hard conversations without losing that control.”

Like most Black women living in the United States, this battle over who controls our narrative has impacted me on both conscious and unconscious levels. The fictive kinship in Solange’s music has been an absolutely essential coping mechanism. There is a certain intrinsic motivation behind her lyrics that calls from us to continue speaking out against injustice. Her words are intentional and spiritual.

Thankfully, another Black History moment happened on that day. On June 24, 1986 Solange Knowles was born. Her words continue to fuel my desire for Black self-love: “We aren't thanking anyone for ‘allowing us’ into these spaces...until we are truly given the access to tear the got damn walls down.”

Happy birthday, Solange. This essay is an ode to your willingness to be vulnerable. Thank you for being the visionary Black woman you are.