Learning About My Father's Personality Disorder Helped Me Forgive Him 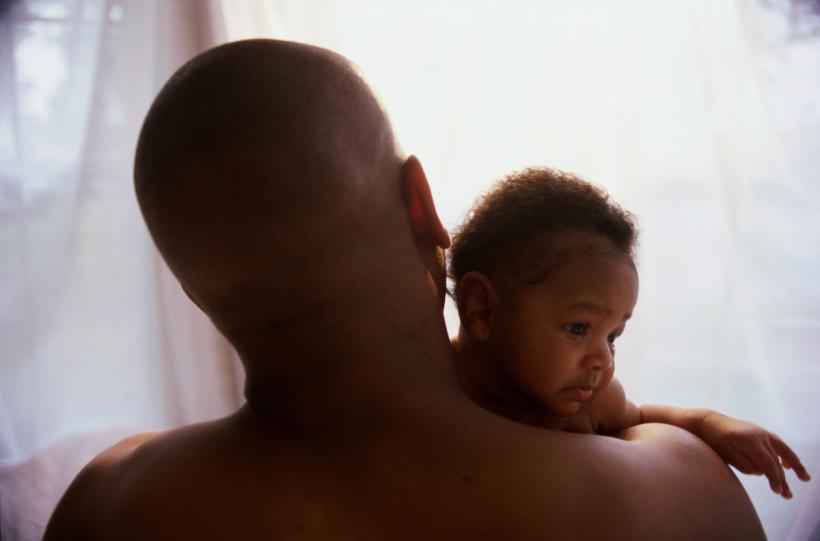 "My anger was there when my father wasn’t. My anger has been reliable. Sometimes it feels like my anger taught me all the things my father should have."

The last conversation with my father didn’t go well.

I remember wondering whether I should reach out for the 100th time. This was a man whose number of missed birthdays exceeds the number of leggings I own. It was terrifying how much of a hold he still had on my emotional state. His apathy regarding my existence messed me up in ways I hope my son never experiences. Even writing this now, I would rather throw my laptop across the room and burn the campus to the ground than hug him.

That won't do anything to alleviate my pain, though. It won’t stop me from getting involved with men who act like him. It certainly won’t teach my son to love himself.

I wanted to forgive him. Each ring made my blood pressure shoot up. As soon as he realized it was me, he launched a campaign to prop himself up as a hero. Within two minutes, he argued that it was my mother who kept us apart. His biggest mistake was saying that he paid thousands of dollars in child support even though my mother “was too lazy to work." My mother was no saint, but I spent hours helping her clean up when she was a janitor. I remember driving to pick her up from a graveyard shift at a horse track so we could pay rent.

My face is wet with tears right now remembering all the jobs she worked to make sure we could eat. He even claimed that he fought for custody every year in court for almost a decade. According to his version of history, he reported my mother for abuse and neglect to try to get me back. He never admitted that he was wrong. After listening to his Oscar-worthy monologue, I said something admittedly cold.

“The least you could do is lie better. You’re getting too old for this and soon (hopefully) you’ll be dead so you might want to make things right with your only child. Just produce a court document to me and I will forgive you for everything. I will let it all go and welcome you into my life with open arms as if you were always there. We both know you can’t, though. You’re still just an addict and a liar.

That was two years ago. I wanted to forgive him so badly, but I couldn’t let go without him admitting that he was wrong.

Aside from symptoms of what I later learned was narcissistic/borderline personality disorder, my father was trapped in rotating addictions. He was in and out of jail. I wouldn’t see him for years at a time, and we he did make an appearance, he made it seem that I was the reason he stayed away.

A few years before I was conceived, my mother and father were teenagers in love writing letters to each other even though they lived within walking distance. They got married at the height of Ronald Reagan's crack era that (unbeknownst to my teenaged mother at the time) ruled my father’s life. By the time I was born, he was in the military. We went to live with him on the base, but it quickly became a psychologically abusive environment and we moved in with my grandparents. He was dishonorably discharged by the time I was a toddler.

I learned the definition of pathological before I hit grade school because everyone who knew my father used it to describe the frequency and depth of his lies. As much as my mother tried to sugarcoat my increasingly distant father, I still knew he wanted nothing to do with me. I cried often and I fought in school. By eighth grade, I had given my virginity to a boy named Mark, “just to hurry up and get it over with” (per my diary entry the day before).

Aside from symptoms of what I later learned was narcissistic/borderline personality disorder, my father was trapped in rotating addictions. He was in and out of jail. I wouldn’t see him for years at a time, and we he did make an appearance, he made it seem that I was the reason he stayed away.

In my 30-plus years on this earth, we have spent an accumulative 18 months in the same room. (I calculated it for a college project in my sociology course.)

This is a man whose greatest skill has been missing my life's milestones. I harbored so much anger over the years. Finding out about his mental health issues cleared some things up, but our last phone call helped me see that he cannot be the determining factor in my healing process. Was he considered "bad" because his disorder was not as acceptable as my mother's depression or my anxiety? Could he control his lying? Could our relationship have been better if we all knew about the intricacies of personality disorder? It is near-impossible to feel anything beyond contempt for a man who treats me like I don’t exist.

I have to accept the fact that Black men are not allowed to deal with their mental health issues — specifically personality and schizoaffective disorders. The man I considered a deadbeat dad for most of my life is a victim too. His lack of empathy and commitment to lies in the face of indisputable evidence will always overpower any connection to me. It hurts immensely every time I think about all the times I cried because I felt like I wasn’t worth anyone’s love or affection. There are countless Black women out here suffering because their fathers left them, and I can’t help but wonder how many of their sperm donors deal with the same issues as mine.

As Black women, we are expected to keep on pushing without complaint or slack. Similarly, Black men are expected to be aggressive and unreliable. The lack of fathers in our community is both devastating and normal. None of the girls in my neighborhood lived with their fathers. None of the girls from the neighborhood I grew up in stayed with the boys who got them pregnant.

But this piece is supposed to be about forgiveness.

As much as my anger towards my father has shaped who I am, I cannot continue to give him that much control over my life. I cannot ignore how his disorder affected our family. I cannot let his psychological trauma determine whether I can trust Black men. His urge to constantly rewrite history makes so much sense when I think about how much white supremacist history has posited Black men as the villain rather than the hero. Who wouldn’t want to change that narrative? It in no way excuses his behavior or other men’s behavior towards Black women and girls. It’s also not a popular way to deal with an absentee father, but it’s my way.

I have to call him out while also recognizing that Blackness itself is still considered deviant in many ways. Being a Black man compounded by living with a personality disorder is enough to drive someone over the edge. My anger was there when my father wasn’t. My anger has been reliable. Sometimes it feels like my anger taught me all the things my father should have. It feels a little bit like betrayal to let go of my anger, but I deserve to let go.

Maybe if my father had access to mental health options, my son might know him as grandpa. Or maybe if my father’s issues were accepted more by society, like mine are, he would at least be marginally involved in my life. Maybe I am using his personality disorder as a desperate attempt to excuse his behavior and redeem a man I share genes with. Maybe I am going against every covenant of every little Black girl abandoned by her deadbeat dad. I really don’t know.

Despite everything that has happened or should have happened or will happen, I love you and I forgive you.