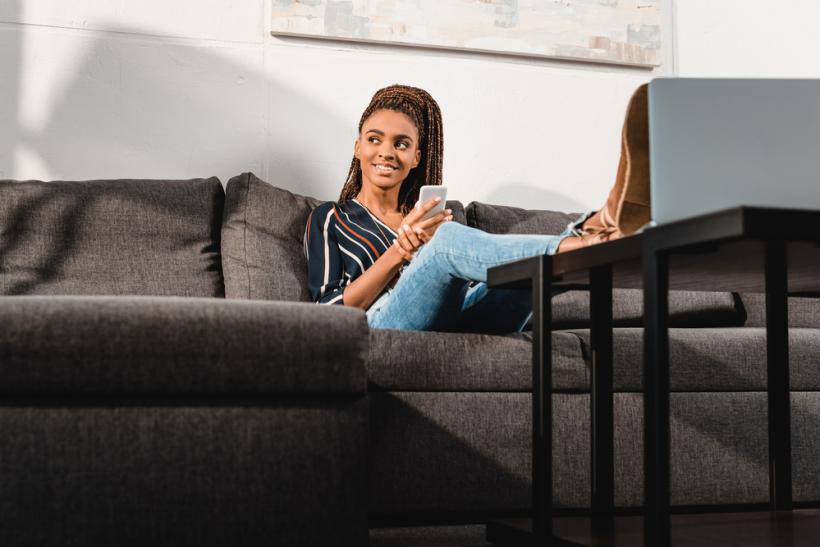 You may feel terrified but you’ll soon learn that they are simple pleasures to living alone after divorce.

When I had to move out of the marital home to start living on my own seven years ago after 20 years of marriage, I was really, really scared. I didn’t yet know the pleasures of living alone.

In fact, the word “terrified” could have best described how I was feeling at the time.

Not only had I never rented or purchased a home on my own, I worried constantly about my safety, how to cope with home repairs and of course how to pay for it all.

I had grown up in a home where my parents were quite ‘old school’ when it came to the idea of shacking up with a man outside of holy matrimony. Even the very thought of bringing up the idea of living together with my steady boyfriend was a conversation I didn’t dare to have- especially with my very strict dad.

As a result, when I graduated from college at age 23, I simply packed up the items from my dorm room, put them in my economy-sized car and then drove all night to reach my parent’s home where I promptly moved into their spare guest room.

My college boyfriend of two years had already graduated from the university and we mutually decided about six months before I graduated that he would go ahead and relocate to the city where I grew up in anticipation of us getting married and starting our lives together there.

After just a few weeks of living again with my parents, each of us started experiencing frayed nerves and the idea of living with my now-fiance was more appealing than ever.

The thought of spending the time, money and gargantuan efforts involved in planning a far-off wedding for my parents’ friends to attend while also dealing with my parents’ moods and expectations became very burdensome compared to the thought of spring-boarding into adulthood by getting married as soon as possible.

After all, I remembered having many conversations with my female college classmates about the importance of dating during college in order to find a man to marry after college graduation which was often referred to as getting your M.R.S. degree.

By this time, my fiance had started a new entry-level full-time job and was not allowed more than two days off work for any reason so we decided to get married at our closest courthouse with just my parents in attendance at the beginning of the next three day weekend.

Now looking back on this, I realize how limited I had been by not taking time after college to gain confidence by tackling the challenges that come along with solo living as well as savoring the benefits that living on your own provides.

Fortunately, once the terrors of living on my own for the first time in my mid-forties began to subside, I discovered there are so many amazing benefits.

Below are nine simple pleasures most of us can experience when living alone:

1. 100 % of your pet’s slobbery affection is reserved for you when you get home.

2. ALL the hot water in the shower is yours.

3. No more sweaty work-out clothes left on your floor.

4. Did he forget to take his bottle of Eternity cologne with him? It’s now in pieces in the trash.

5. His ‘man cave’ has been repurposed into your new yoga/meditation retreat area.

6. Peace and Quiet as you sit down and open your new Oprah magazine.

7. Entire closet and master bath are yours now.

8. Minor home repair?  That’s what wiki-how and YouTube videos are for!

9. “What’s for dinner?” Microwave popcorn and Ben & Jerry’s Chocolate Therapy ice cream. (Bonus: no clean-up if you eat right out of the container!)

Learning To Love Being Alone After Divorce

5 Tips For Enjoying a Night Out By Yourself

5 Ways I Found Hope And Thrived After I Divorced

If you like this article, please share it! Your clicks keep us alive!
Tags
divorced moms
divorce
life after divorce
living alone