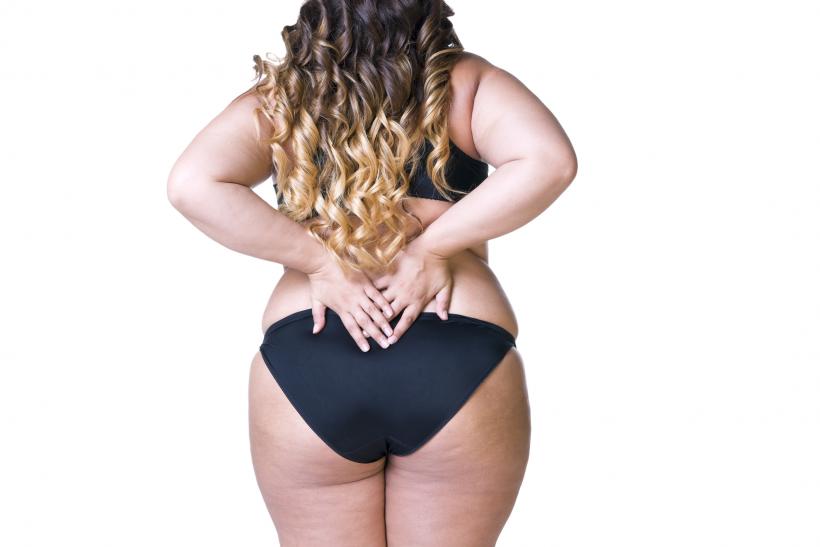 Perhaps the biggest problem with plus-size nominees not finding clothes is getting the fashion industry to overcome its fatphobia.

In honor of Fashion Week, Vogue's September Issue, and all the fun the comes with fall fashion, we'll be talking about plus-size fashion — otherwise known as "fatshion" — throughout this next week! Plus-size style boasts its own beautiful, unapologetic brand of contemporary fashion, and we've curated a range of writing that aims to capture both its political roots and unique aesthetic. Find the rest of the stories featured in The Fatshion Conversation here.

Award shows represent the big time for designers as they vie to dress the nominees and have their creations seen and talked about all over the media. A quick Google search finds thousands of articles that discuss, in exact details, precisely how the stars get ready for their big day — starting weeks or even months ahead. But there’s one story that doesn’t get told, the story of the plus-size nominees who can’t get designers to make dresses for them at all.

Melissa McCarthy talked about the issue in the July 2014 issues of Redbook:

"When I go shopping, most of the time I’m disappointed. Two Oscars ago, I couldn’t find anybody to do a dress for me. I asked five or six designers — very high-level ones who make lots of dresses for people — and they all said no."

That’s right, even if they are incredibly talented, fabulously funny, able to break through Hollywood’s staggering size bias, and nominated for one of the most prestigious awards in their field, plus-size nominees still can’t get any respect from the fashion industry. You would think that designers would want their clothes to be seen on a woman who represents billions in buying dollars, but it turns out they would rather cling to their fat bias.

Two years later, as she was preparing for the premiere of the Ghostbusters reboot, Leslie Jones took to Twitter with a similar lament. 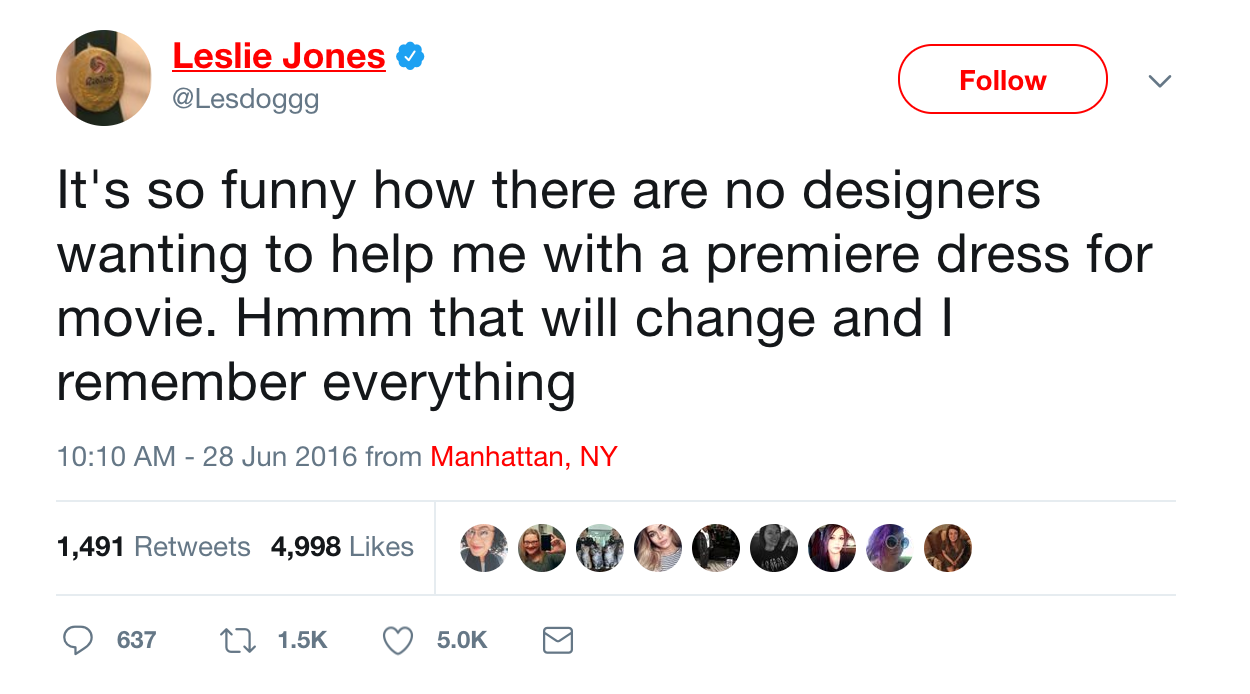 In this case help was just a tweet away, as designer Christian Siriano tweeted a quick “Wave” at Ms. Jones. You may know Siriano as the designer who parlayed a win of season four of Project Runway into his own clothing line with star studded clientele. 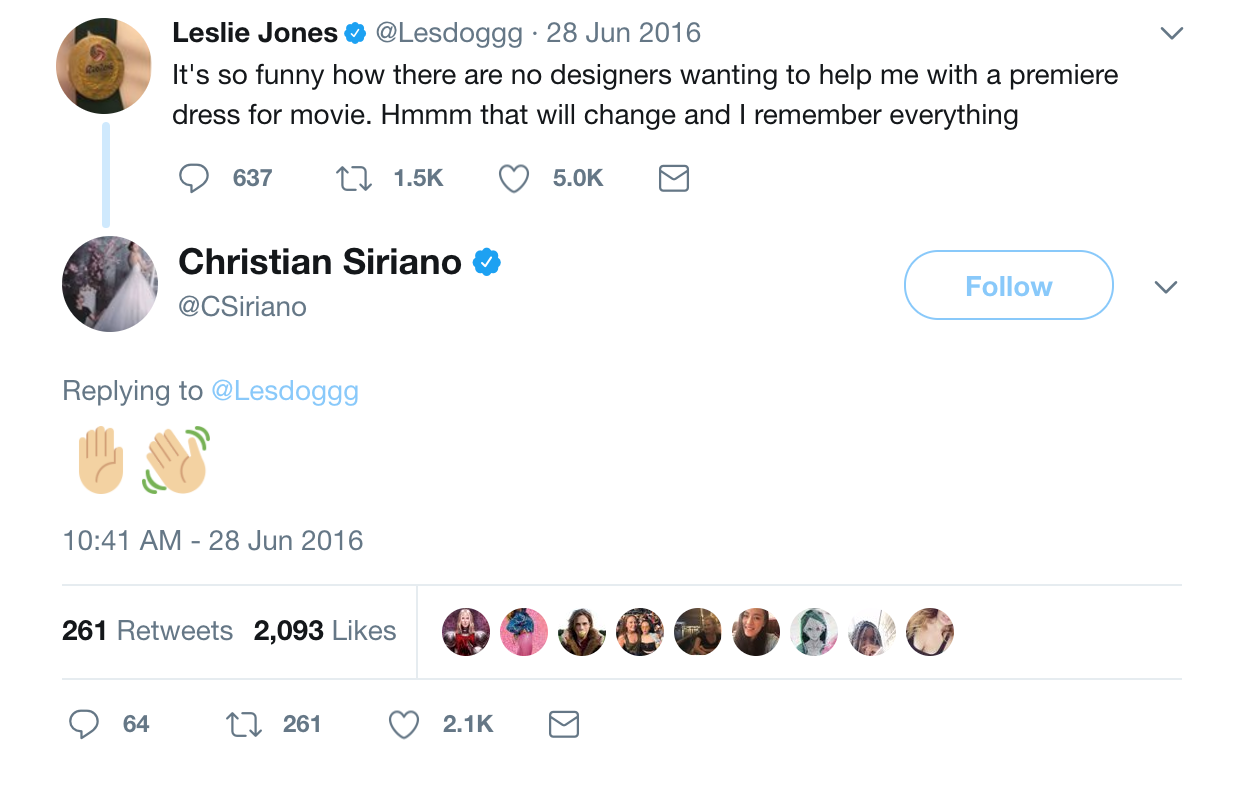 Soon Ms. Jones was rocking the red carpet in a Pretty Woman inspired gown that fulfilled her request to “be ‘sexy,’ and show off my body a little bit.” Soon after that, Siriano was sending plus size models down the runway at his shows and launching a collection with Lane Bryant explaining:

“Honestly, I think the "trick" is you have to really want to do it. You're embracing more of the world. Which is great. We're all in the world together, you know? And the models in the show who are "plus size," they're not in a special place, they're not wearing differently styled outfits. They're just beautiful girls who are in the show, like normal. Everything's normal. That's how it should be!”

It is certainly how it should be, but it’s not how it is…not even close. There are definitely issues within plus size fashion, including a completely incomprehensible sizing system and a tendency toward the hyper-feminine, which leaves many folks out. But in a world where Chanel designer Karl Lagerfeld once said “No one wants to see curvy women,“ perhaps the biggest problem is getting the industry to overcome its most basic fatphobia.

Dunn’s company, Smart Glamour, offers an “affordable, fashionable, and customizable ethical clothing line for people of all shapes, sizes, heights, ages, identities, and styles.” Her recent runway show was sold out, had hundreds of people on the waiting list, and sent a diverse group of models down the runway.

That brings us to the 2017 Emmys. I have a long history of frustration with the way in which award shows and the media circus that surrounds them completely ignore the work that women do so that they can talk about how women look, which is why I’m such a fan of the #askhermore project. Still, that’s the culture, and while actors can opt out of that culture or choose to speak out against it, they should not be left out of that culture because of their size, age, race, or any other factor.

So at this year’s Emmys I was absolutely thrilled to see Leslie Jones — an incredibly talented actress and comic who has to deal with a ceaseless onslaught of racism and misogyny — back on the red carpet in another gorgeous gown from Christian Siriano.

I have a fraught relationship with the “capital F” Fashion because it is so often used as a tool to perpetuate marginalization and oppression including those based on racism, sizeism and classism, so I look forward to a day when fashion is about all people having access to the clothes they want to wear and nobody being left out, left behind, or purposefully and proudly ignored by the industry and the designers at the center of it.

For now, I’ll appreciate designers like Christian Siriano and Mallorie Dunn who are leading the way.

If you like this article, please share it! Your clicks keep us alive!
Tags
The Fatshion Conversation
fat fashion
plus size fashion
fat bias
fatphobia
Fashion
red carpet