Why Is The Internet Fighting About P*ssyhats? 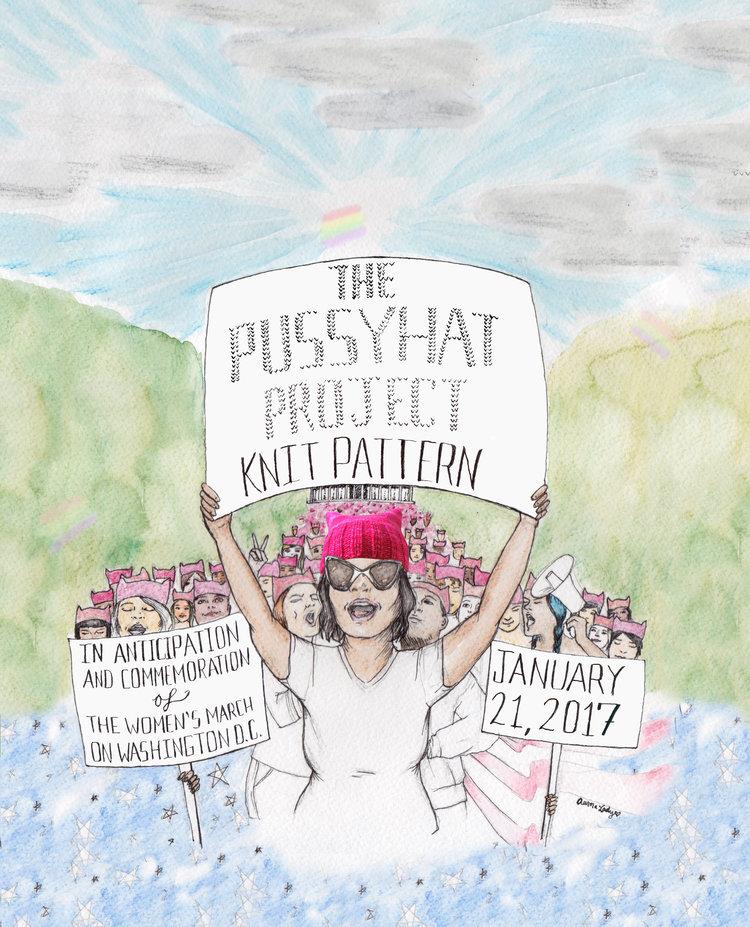 Artwork by Aurora Lady for The Pussyhat Project

On January 21st, 2017, there’s going to be a march on Washington and sister marches in many cities across the country. The Women's March was an idea hatched after the presidential election, growing from baby chick to fire-breathing dragon in the months between the day Trump was elected and the day he’ll take the oath of office.

Now. Like many grassroots movements, this protest has had its share of issues. Not everyone has loved every aspect of the planning, and the organizers made efforts to listen to folks clamoring — rightly — for the march to reflect intersectional principles. They’ve released a guiding platform for the movement, crafted by people of many races, backgrounds, and ideologies and LAWD. It’s some good stuff. This event and the movement it’s spawning has the potential to kick some serious ass.

Which brings us to the pussyhats.

As we all recall, our soon to be Commander in Chief is a fan of grabbing cis women by their genitals because he lacks even the most basic sense of personal boundaries and should therefore never be left alone with other humans, much less our nuclear arsenal and…

Ahem. I’m sorry. I’ll get back on track.

Someone in the internet world (most notably, Krista Suh and Jayna Zweiman, who co-founded the Pussyhat Project) got the brilliant idea to knit hats that follow a pattern of having little cat ears, only to make them pink to represent pussy power. We now have the Pussyhat Project going full strength with women planning to wear their pussy hats to the march. It’s witty, subversive, and attention-getting. Like a suffragette’s sash, a Vietnam protester’s peace sign, or a gay pride rainbow, it’s a symbol. Every movement has its symbols.

Naturally, the hats are annoying some people. There was a column in the Washington Post suggesting that the hats are frivolous and threaten to undermine the seriousness of the need for resistance in an age of Trumpism. In a sound-byte-ready sentence utterly devoid of irony, the author says, “The Women’s March needs grit, not gimmicks.”

Nice alliteration, fam. It almost reads like a gimmick.

Look, if you don't like pussyhats, don't fucking wear them. But I am SICK TO DEATH of people yammering on about how other people should comport themselves as we enter a political No Man’s Land.

We have elected a Chaos Demon to lead the free world; there is just no room for discussions of headgear as we take to the streets to show him where the resistance lies. Criticizing hats is just another form of tone policing, and the time for that is over. Women, people of color, the LGBTQ community, immigrants, and religious minorities have been trying to stay polite and decorous for years, and you know what? FUCK THAT NOISE.

Hand me a pussy hat, because I am DONE trying to talk like an adult to a man who wouldn’t know maturity if it... grabbed him by the pussy.

Yes. We need to have goals and we need to be clear-eyed about what it will take to achieve them. But we also need tactics that grab the attention of a populace who has become accustomed to breathless furors that crop up tweet by stubby-fingered tweet. This is a time for shock and awe.

If you like this article, please share it! Your clicks keep us alive!
Tags
pussyhats
Women's March on Washington
Politics
feminism
activism