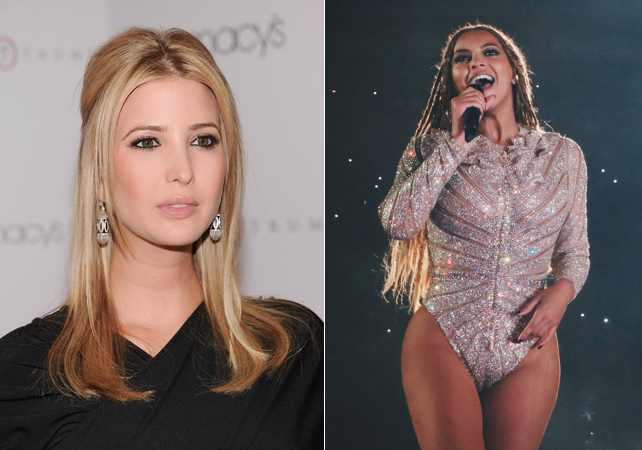 Queen Bey or Ivanka - who won the week in feminism? (Image Credit: By Rocbeyonce via Wikimedia Commons; Flickr/Rich Girard)

Welcome, friends, to a little game I like to call “Are You Better At Feminism Than The First Family?"

In this corner, we have First Daughter and Presidential Advisor/Enabler Ivanka Trump! This week, Ms. Trump appeared at a meeting of female business leaders in Berlin, where she was booed by the audience.

In the other corner we have Beyoncé, who is Beyoncé.

Ms. Trump, who sells jewelry and clothing when she’s not advising her father on how to be a president, spoke on a panel with such luminaries as IMF chair Christine Lagarde and German Chancellor Angela Merkel. Ms. Trump was asked about her father’s attitude toward women, a valid line of questioning given that her father is currently being sued for defamation related to sexual harassment claims. (Other allegations of sexual assault and unwanted touching have dogged the President as well.)

Ms. Trump said that all the women her father had hired are “are a testament to his belief and solid conviction in the potential of women and their ability to do the job as well as any man.” She also said she was raised exactly the same as her brothers.

I’m not so sure about that claim because I’d literally never heard of her brothers before 2016. And her dad certainly hadn’t called either of them a piece of ass on Howard Stern. So maybe Trump loved Ivanka more? Hard to say.

But for all the talking, Ms. Trump declined to offer a proactive presidential agenda designed to benefit American women. She just talked about how great her dad is and blamed the media for some stuff.

Our other contestant, Beyoncé, celebrated the one-year anniversary of her brilliant Lemonade album release by announcing the launch of the Formation Scholars. The initiative will provide scholarships to young women in college or graduate school who are pursuing degrees in creative arts, music, literature or African-American Studies.

The scholarships will be awarded to students at four institutions: Berklee College of Music, Howard University, Parsons School of Design, and Spelman College. One student from each school will receive a one-time award of $25,000 for the 2017-2018 academic year.

It is worth noting that Howard and Spelman are both Historically Black institutions and rank number one and two among HBUCs.

I think we can sum that up with the words of Queen Bey: “We have to step up as women and take the lead.” Thanks for leading, Mrs. Carter. You’re doing the good work of feminism!