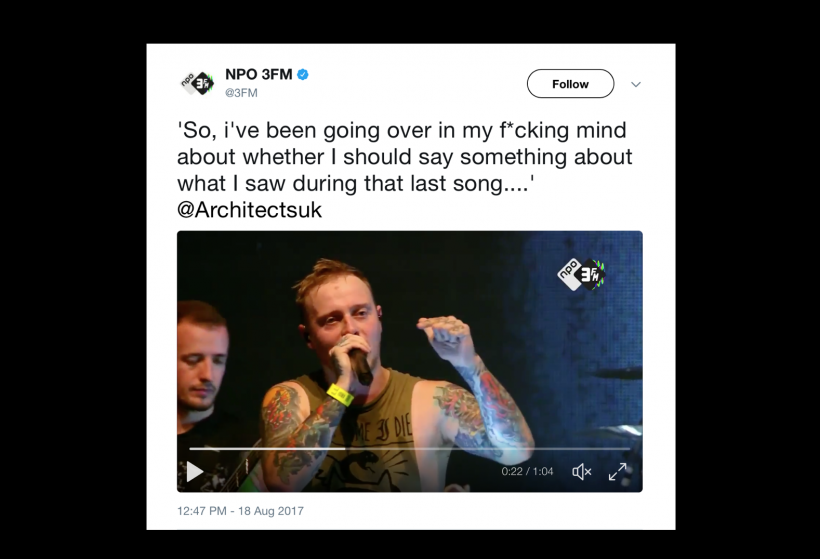 It's not your body and you do not grab at someone. That's just perfect. PERFECT.

It's been a long time since I had a fan girl thing for a musician but today I'm finding myself hardcore crushin' on a metal singer named Sam Carter from the band  Architects.

See, here's the story. Carter was on stage at a festival in the Netherlands. He looked out into the crowd while he was performing and saw something he didn't like. When the song was over, he walked to the front of the stage and said this:

"I saw a girl, a woman, crowd-surfing over here, and I'm not gonna fucking point the piece of shit out that did it, but I saw you fucking grab at her boob. I saw it. It is fucking disgusting and there is no fucking place for that shit. It is not your fucking body. It is not your fucking body and you do not fucking grab at someone. Not at my fucking show."

Any woman who has been to a concert has probably had an uninvited hand grab at her body in the crowd. To see a performer — a male performer, at that — stand up and call out groping like that? I want to scream "FUCK YEAH!" and buy that guy a drink after the show. That is just balls-to-the-wall awesome.

'So, i've been going over in my f*cking mind about whether I should say something about what I saw during that last song....' @Architectsuk pic.twitter.com/zm5L4zlXpw

It's not your body and you do not grab at someone. That's just perfect. PERFECT.

Hats off, Sam Carter. You're a good guy. Thank you for doing the right thing.

If you like this article, please share it! Your clicks keep us alive!
Tags
Sam Carter
feminism
sexual harassment
Music