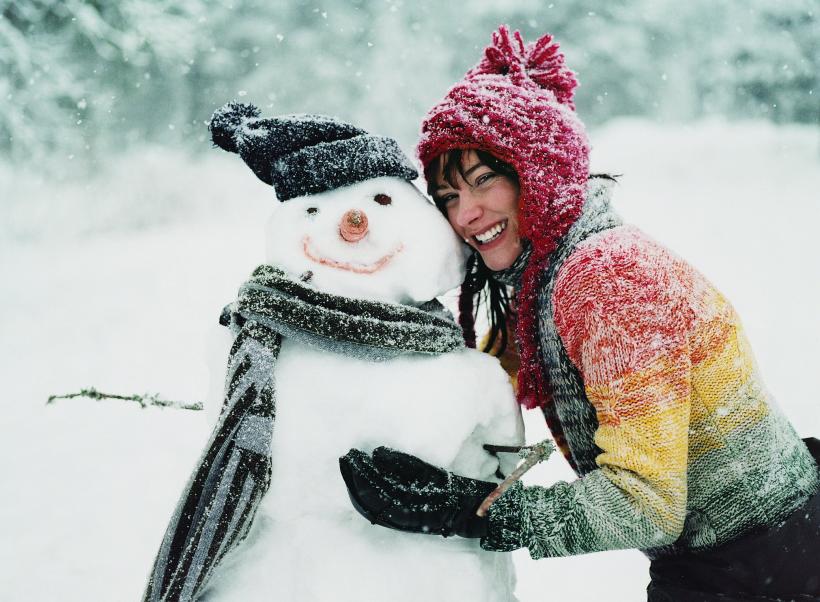 In this family, those figures traditionally made of three snowballs stacked atop each other — they’re called snowpeople.

In my part of the world, it is winter, and (at least this year) winter means snow. Midwestern winters can be rough, and while I don’t find any particular joy in the cold white stuff covering my lawn, my child has a different opinion.

My kid wants to go outside and play, and when there’s not a wind chill advisory, I’m willing to indulge him. And once he gets out there, he’s going to want to build a snowperson.

In this family, those figures traditionally made of three snowballs stacked atop each other — they’re called snowpeople.

I know what you're thinking. You're thinking that of all of the things for a feminist mother to get worked up about, it seems a little over the top to be bothered by something as innocent as a snowman.

After all, there are so many real problems I should be focusing on. Should I be more worried about the wage gap? What about sexual harassment in the workplace? Don’t I know that there are places in this world where girls are still forced to get married before they are fully grown?

Maybe to some extent you have a point. There are so many gendered injustices staring us in the face every single day.

People might raise their eyebrows when they hear me say “snowperson” for the first time, and maybe they think I’m uptight and terrible. But it makes perfect sense. A man is just a kind of person. And it’s the same thing for people made out of snow.

When my spouse and I planned to become parents together, we were aware that we would have many choices in our parenting journey, and that those choices would become overwhelming at times. We were also aware of sexism, and how sexism manifests in the world of children. It isn’t just one thing. There’s the way that we as a culture market things to boys and girls completely differently. There’s the fact that adults perceive children differently based on their assumed gender. When my kid was a baby people assumed he was big for his age if they thought he was a boy, but when they assumed he was a girl, they remarked on how tiny he was.

There are more boys than girls in kids’ books by a lot, and don’t even get me started on TV. Then there’s the fact that we assume everything is a “he” until proven otherwise. The landscape of childhood mostly follows what I will call The Minnie Mouse Rule: A mouse that is just a mouse is a boy; if you want to make a girl mouse you have to add at least one bow.

When I was a kid, I insisted that all of my stuffed animals were boys. I did it on purpose. I earnestly believed maleness was standard and femaleness was exceptional. I thought that if I made all of my toys dudes, that would be fair and show I was realistic. But if I called the same stuffed bears girls, that would prove that I was biased — it would make me just a shallow little girl who only liked girly things. That idea didn’t come out of nowhere.

Everything in our language and culture had taught me, by the age of seven, that femaleness was other and not normal.

That kind of default to maleness isn’t just bad for girls; it’s bad for boys and nonbinary children as well. If we want our sons to see girls as their equal, to empathize with girls and woman and respect them, we can’t do that by presenting them with an imaginary world in which girls barely exist.

Snowmen, as they are called in nearly every other home in America, are just one tiny piece of that. But they are very much a piece of it. When winter comes, they are everywhere; they’re in holiday song and on pajamas and seasonal decor. My spouse has an aunt who collects snowmen of all sorts. And snowmen are often seen as holiday neutral, so the snowman motif makes it places where Santa Claus can’t tread. The snowman is simply a symbol of the season, not affiliated with a particular faith or day; he is free to adorn “Happy Holidays” cards as well as to persist well into January.

And he is also very much a dude.

But not in my house. In my house, people built out of snow are just that — people. We can assign whatever gender we like to them, and we aren’t obligated to assign any gender at all. My child LOVES snowpeople or “snowpersons” as he adorably calls them. At two and a half, he doesn’t have the attention space to make one (or even let me make one without demanding that I just hand over all the snowballs for throwing), but he’s a big fan.

And here’s the thing about making the switch to snowperson. It’s a difficult change at first. The word snowman is already in our vocabulary, and everyone else is saying it. But once we started saying snowperson more, it became easy and ordinary. It’s also accurate. When my child asks the neighbor kids “you building a snowperson?” they say yes, even if they would have called it a snowman otherwise.

People might raise their eyebrows when they hear me say “snowperson” for the first time, and maybe they think I’m uptight and terrible. But it makes perfect sense. A man is just a kind of person. And it’s the same thing for people made out of snow.

If you like this article, please share it! Your clicks keep us alive!
Tags
feminist
feminism
equality
gendered injustices