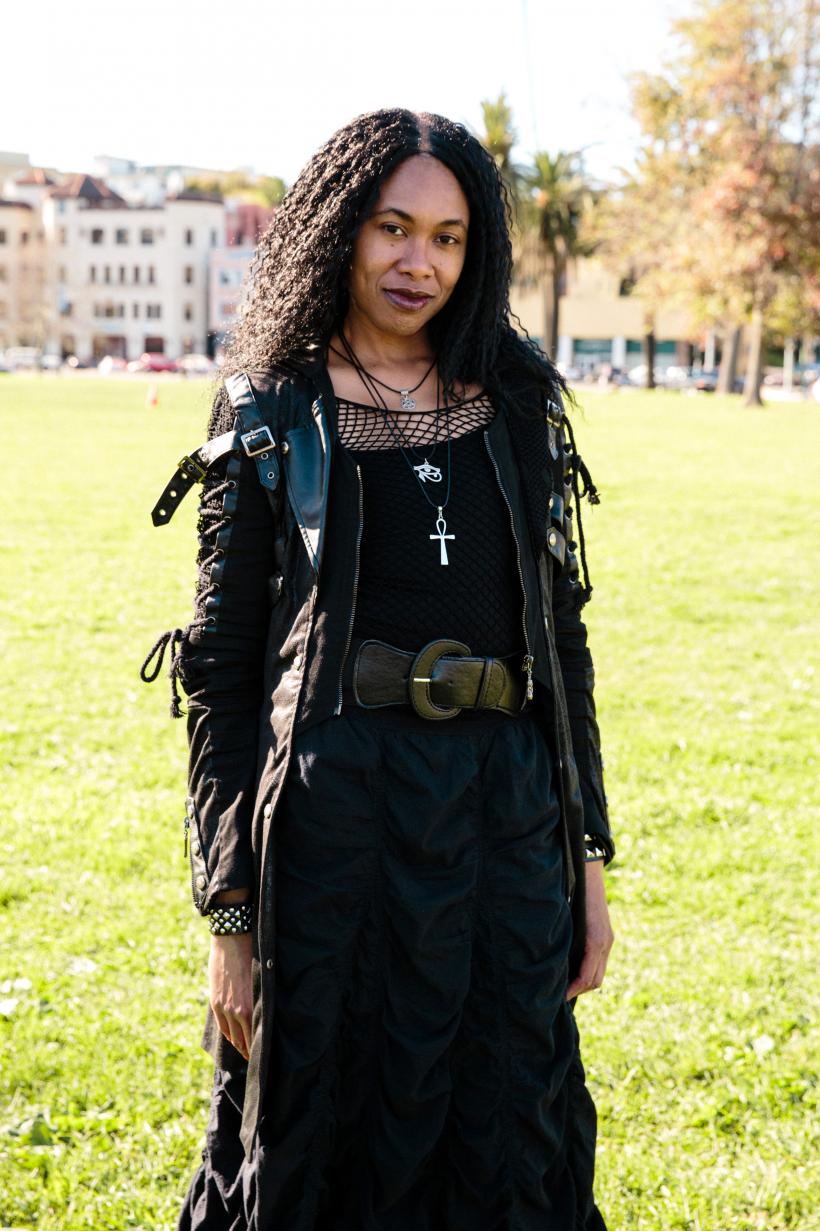 What are you up to?

How did you get started doing that?

I've been making rag dolls since I was probably 7 or 8 years old.

How long ago did you start your Etsy shop?

So when did you get your first inking that you wanted to be a dollmaker?

Well to be honest, it came out of not having a lot of money growing up. So we'd just take scraps of fabric, old clothes, and then we'd turn that into dolls—my sister and I.

What's been your favorite project to date?

I made a doll who is gothic, has dreads, and the doll's outfit looks exactly like what I have on. Kind of like a replica. Like a mini-me, sort of! [laughs]

When you make dolls do you look to any outside inspiration, or do you just do your own thing?

No, I just pretty much do the kind of dolls my sister and I made. We just sort of made it up as we went along.

What has been a recent obsession or something that caught your attention?

Yeah, there's this movie that came out oh, probably in the last decade. It's called Gypsy 83, and it's a movie about a gothic girl and her buddy going to New York City to an event called 'Night of 1000 Stevie's' at a famous bar called Mother. So the movie is mostly about their road trip-from Ohio to New York City. I just love that movie. I love the clothes they wear, it's just awesome.

Did you grow up in the Bay Area or did you move here from somewhere else?

How was making the transition from LA to here?

It was a bit of a culture shock. I kind of miss LA, because in my personal opinion I think people are more stylish and interesting there and more friendly sometimes, depending on which neighborhood I go to.

What are your favorite neighborhoods out there?

Oh gosh, you know I haven't been there in a long time but I do remember hanging out in West Hollywood a lot! [laughs] That and going to the beach.

It just had this vibe of coolness, for lack of a better term! And very LGBT-friendly, so that was great too.

So people here are not as friendly sometimes?

That's odd too, because you'd think Bay Area is a pretty open place!

You'd think! But when I do this gothic look, people kind of look like, what kind of alien am I? Especially in this neighborhood, people look at me like I'm nuts. I dunno, I think they're scared by the look and the dark clothing and the jewelry. The dark lipstick—it's like whoa, what are you?

Are there any particular neighborhoods that you've gone where they get it, or it's not so much like, "whoa!"

Well, of course in San Francisco nobody cares at all!

So the East Bay is not quite prepared for it yet?

Have your heard any good advice lately?

I'm sure I have, but I one of those people who never follows other people's advice so I never remember it. I just do my own thing.

Where are your favorite places to hang out in the area?

Hmm, lets see . . . you know the Berkeley Rose Garden up in the Berkeley Hills? I really like hanging out there. There's a really good view of San Francisco, so I like to take photos if it's a clear day of the Golden Gate Bridge.

And how did all these pieces come about?

I think I bought the entire outfit from eBay—yeah, I did! Even the jewelry.

You know I'm a man right? I was assigned female at birth but I identify as a man. I'm transgender.

Really? Well you look amazing. Is it OK with you that the tagline of this blog is “There's no wrong way to be a woman?”

Sure, just mention that I'm a dude in a dress.

Now that you identify as male, do you think you'll be changing the way you dress?

How do you navigate gender, especially since so much of it can be dictated by what you wear?

I separate clothing from gender, and though it's confusing to others, it's not that way for me. I'm secure in my identity. I know who I am, and the clothes I wear make me feel comfortable. I don't care what society says about clothes being for specific genders. I think that clothes are for any human who wants to wear them, whatever their gender identity is. It's the 21st century, and it's about time for society to stop freaking out over a guy in a skirt.

What are some gender assumptions you've come across in your day to day?

Folks think I'm a woman, but as far as correcting people is concerned, I pick my battles, so to speak. I wouldn't tell a cashier at a drug store, because I might never see them again, and even if I told them, they probably wouldn't want to know that information about a random customer. I also don't tell people I'm a man if I'm in an unsafe environment, where I can sense that the people around me might get hostile if they knew about me. It's no secret that men in dresses get harassment and experience violence on a daily basis.

What have been some pleasant surprises?

People who I thought would have a negative reaction to me wearing a skirt have supported me and see my attire as no big deal. My clothes haven't had any affect on my dating life. I can still find people who don't mind, and in fact love the way I dress. In the past, I had encounters with folks who just couldn't accept my philosophy, but lately more people are starting to agree with me that clothes are for anyone, and that clothing doesn't always reflect a person's gender.