Ask Erin: How Do I Support My Friend Who Was Raped? 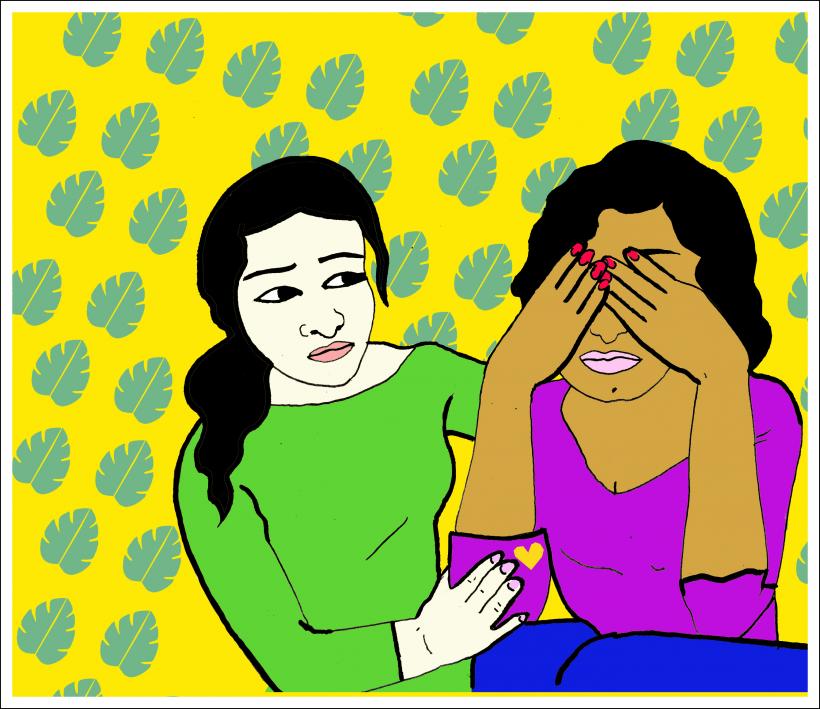 I was hoping for some advice on the best way to deal with a delicate subject.

My friend came to see me yesterday and during the course of the day she confessed that recently she "was sort of assaulted.”

She explained that she had met a guy on Tinder and had willingly gone back to his place. They had both been drinking, and so she posed for a naked photo. She told him that she wanted him to wear a condom during sex and he at first appeared to be okay with that. However, when she reached for the condom to put it on, he pinned her down so she couldn't move and put his penis inside her without it.

She said that she froze at first but then managed to push him off her before he finished. Apparently, he didn't seem to understand what her issue was and told her that he doesn't like condoms. She told me she, understandably, feels very angry.

I've suggested that she report it, but she isn't interested in doing that. I don't think she realizes how bad it is and I want to be supportive without making things worse.

She described it as "kind of a grey area" because she “consented.” I've tried to explain that she consented to sex with a condom not to being pinned down so they couldn't use one. She is on top of the practical side as she has got herself tested and arranged an HIV test but I don't know how to support her emotionally when she's playing it down and insisting everything's fine.

She is worried that if she does report it then nothing will happen anyway and he will use the naked picture to prove consent. I've left things by explaining that I respect her decision and she only needs to ask if she wants anything at all.

Is there something more I can do?

I hate that it's happened to her and the thought of this guy doing this to other women makes me sick. I want to be a good friend without causing more damage.

You Might Also Like: Ask Erin: How Do I Tell My Best Friend That He Sexually Assaulted Me?

As an advice columnist, I receive many questions from folks who write in asking if I think what happened to them was rape or if they should tell someone about their sexual assault or what they should do in the wake of an assault.

Your question is an important one because we all know someone (likely many someones) who has been sexually assaulted.

What happened to your friend is awful and, sadly, all too common. I have heard countless stories, from friends and readers of this column, about similar situations — from “stealthing” to sex that began as consensual and turned into rape. As you know, your friend wasn’t “sort of assaulted;” she was raped. She did not consent to have his bare penis inside of her, and he held her down and shoved it in anyway.

Consent is not a one and done concept. ANY sexual contact without consent IS sexual assault.

Consent requires voluntary, affirmative agreement among all parties involved, and can be withdrawn or altered at any time during a sexual encounter.

I can understand why she is reluctant to press charges. While it may feel frustrating, as I know you want justice for what happened to her, you have to respect her decision, and, at this point, don’t force the issue.

So what else can you do to help?

You’ve already started helping her by listening to her and validating what happened to her.

Continue to do that. But, don’t push her into talking about it if she doesn’t want to do so. Everyone processes trauma differently and in their own time. That said, it is totally cool to check in with her about it from time to time.

Encourage her to seek therapeutic support.

RAINN and NSVRC have thorough lists of resources on finding all sorts of support after a sexual assault. Offer to help her find someone to speak with, or drive her to her first appointment. She may not want or need that type of support, but if she does, she will be grateful that you offered.

Plan some self-care activities that you can do together.

When we are in the midst of processing trauma, we aren’t always good at remembering to be extra kind to ourselves. Plan a picnic or a spa day, a day at the beach or a Netflix and face mask night. This type of support is priceless.

And, as you have been doing, continue to listen. Don’t try to fix things or push her to talk if she’s not up for it. But, just be there.

The information within Ask Erin should in no way be interpreted as medical advice because I'm not a medical professional. But I am here to help — to share with you the wisdom I've gained after years of making mistakes. If you have a question for me about relationships, addiction, dating, friendship, depression, sex, consent, what I’m reading, Sphalerite, or anything at all, use the contact form below or email me at askerin@ravishly.com. As always, your anonymity is golden. Lastly, I’m so excited to share my Ask Erin Self-Care Guide, free when you sign up for my weekly newsletter. xoxo

If you like this article, please share it! Your clicks keep us alive!
Tags
Ask Erin
Rape
date rape
sexual assault survivor
advice