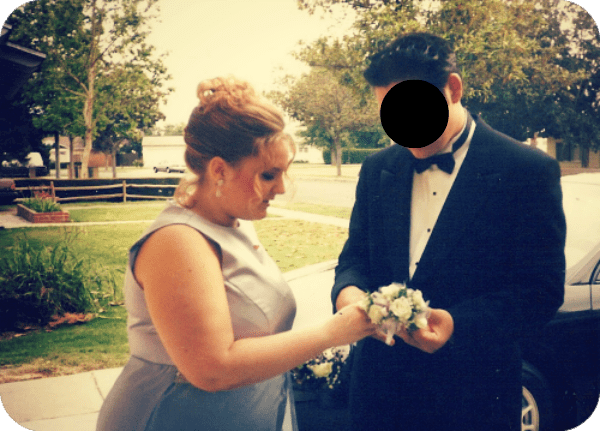 I knew him. I trusted him. He did not rape me…or did he?!

This article first appeared on Plus Size Birth and has been republished with permission.

It was my first year at Fullerton Community College, the place I fondly refer to as high school with cigarettes, and I was 19 years old. There, I found solace with familiar faces, including the guy who took me to his senior prom. I’ll call him Steve.

On March 25th, 1999 my best friend at the time Nick, had a few of us over to his grandparents’ house since they were out of town. We watched movies and had a few drinks. I was hoping Steve would follow me upstairs when I was heading to bed, and he did.

For the record, we had been intimate one time that previous November.

Soon after we entered the guest room, we started fooling around. After a little while, he put on a condom but lost his erection, so he took it off. We messed around some more, and then he got on top of me.

I didn’t scream and I didn’t fight. I didn’t do anything but leave my body for a few moments.

It was as if I sunk deep into the mattress and was in some foggy place. How could this be happening? I wanted to have sex with him, but not like this.

It was over quickly, and I got up to get dressed and went downstairs. All I knew was that I wanted some fresh air.

I did go back upstairs a little while later and slept next to Steve that night. I didn’t say anything to him or Nick in the morning about what had happened.

Life went on as normal, only it wasn’t normal, and it never would be again.

Not long afterward I told Nick what had taken place. He didn’t believe me. He said that if something like that had happened that I would’ve woken him up or cried out for help.

He made me question if my account of what happened was true. I started doubting myself and my story.

I shared what happened with another friend, and immediately said, “That’s rape.”

Rape?! I wanted to have sex with Steve, after all. He was my junior year prom date, and we had done countless plays together in drama class. I knew him. I trusted him. He did not rape me…or did he?!

Related: Ask Erin: Do I Tell My Rapist That He Raped Me?

After a few days, I felt the need to confront Steve. I remember I couldn’t even look at him and I felt incredibly sick while I spoke.

The only thing that I wish I would’ve done better is — I was too nice. There was so much I wanted to say but all I could say was how I wanted him out of my life, and he was wrong for not respecting me. He just agreed with me and left my house — but it’s over! — Journal entry from April 1st, 1999

There was no possible way I was returning to Fullerton College for the next school year because I never wanted to see Steve again. When a family member suggested I check out Colorado, I leaped at the opportunity. Much to the surprise of my family and friends, I left the only home I had ever known in Southern California just five months later.

Alone in Colorado, I started doubting myself again. Did it really happen? I wanted to have sex with him so how could I consider myself a victim? I know victims of sexual assault, and horrible things happened to them.

I stopped doubting myself after the first time I had consensual sex in Colorado and found myself shaking uncontrollably. I knew it wasn’t because of what had just taken place, but because of what happened to me that one night in California.

The night I had been sexually assaulted.

The assault only lasted a minute, but the impact has continued for nearly 20 years. From weight gain to having severe anxiety during sexual encounters, Steve took something away from me that I can never get back.

I met my now husband soon after moving to Colorado and he was the first man, since the assault, who made me feel completely safe and secure. He still does to this day.

I’m not sure I would’ve shared my story if it wasn’t for what happened just recently. Out of nowhere, Steve sent me a Facebook friend request.

The moment I saw it, I jumped up from my desk at work and went to my friend’s cubical. She immediately asked what was wrong. I was in shock and felt violated all over again. The assault took place so long ago and yet I found myself sinking into that same fog instantly.

A week later, I got furious and found the courage to SCREAM. To finally just feel all of the rage and anger that had been building inside of me.

What Steve did to me was wrong. It didn’t matter that I was naked or wanting to have sex. The second I said no, he should’ve stopped, and he never should’ve forced himself into my body.

It has taken me a very long time to be able to forgive — myself.

I forgive myself for ever questioning what happened and for not speaking out about it until now.

One of the main reasons I’m going public with my story is because it’s prevalent. Date rape makes up 57% of rape cases in the USA. Regardless of what a woman is wearing, how she is acting, or her willingness to have sex in the first place, no will always mean no.

If you’re reading this right now and can relate to my story, please know what happened to you wasn’t right and you are not to blame. When you’re ready, I hope you also find the courage to scream and then forgive yourself. You’re worth it.

One in three women and one in six men are victims of sexual assault. Below are some supportive resources.

More From Plus Size Birth:

If you like this article, please share it! Your clicks keep us alive!
Tags
Rape
date rape
consent
Sexual Assault

I Spoke Up About Being Size Inclusive; Dove Listened
Jen McLellan

When You’ve Been Fat-Shamed By Your Doctor
Jen McLellan

Is It Rape If...
Jen McLellan

4 Ways To Have Hot Sex After Baby
Jen McLellan