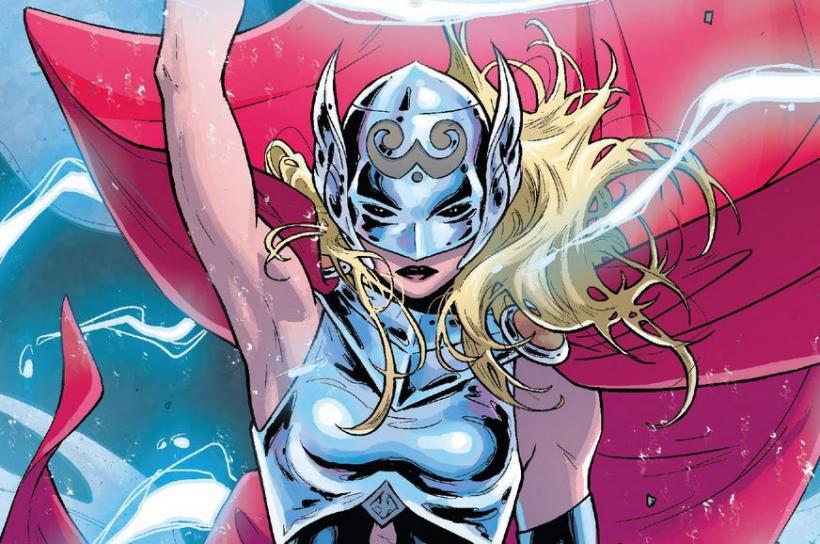 The shimmering rainbow shadow of the bifrost makes for a nice spot to quietly enjoy some humble pie.

In July of last year, Marvel announced that the title of Thor would be passed onto a woman, as the original was no longer worthy of wielding Mjolnir, the magical hammer. Many an incredulous and malicious guffaw was had at the expense of diversifying comic books to appeal to a diversified audience. If Mjolnir was a comic book blog, it'd still be wedged into the earth—the new Thor's first run has already outsold the previous Thor's last run. While this doesn't prove a staying appeal, it pointedly shatters the notion that women superheroes will not sell outside of sex appeal—much like the new Thor will shatter the bones in your face for scoffing at women's rights.

Ah, but who amongst us mere Midgarian commfolk, who lack the eclipsing wisdom of Odin or the ever-penetrating vision of Heimdall, could have foreseen that passing a comic title to a female protagonist would yield such riches? I mean, except for DC, which promoted Batman background character Renee Montoya, a Latina lesbian, to be the next Question . . . then watched as she made the list of Wizard Magazine's top 200 comic characters and IGN's top 100 comic book heroes.

There are more than 100 members of the Justice League and the X-Men, past and present. And the hero that came immediately after Renee Montoya on that list? She-Hulk, who was said by IGN to have escaped the shadow of her male namesake.

The potential of women's success as eponymous comic book characters has never been in practical doubt. The notion that women will not buy comics if they see themselves in them is a planted figment. But its doing is not that of any mad scientist with a ray gun of magnetism, but a male-dominated society assured of its own "logic" and "reason."

Who's the real supervillain, here?