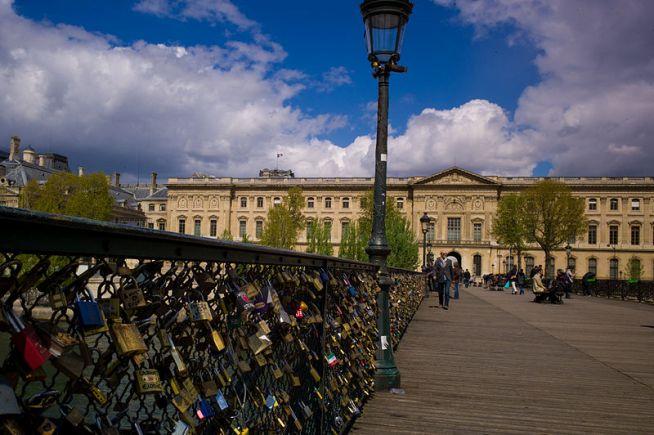 Have you ever wanted to fly to Paris and leave a piece of your everlasting love on the Pont des Arts bridge? Well, sadly, the international city of love just removed a railing of padlocks (or love locks, as they're called), which has become a symbol for thousands of lovers.

Over 700,000 locks were removed over the weekend, for fear that it would ultimately damage the iconic 19th century structure and pose a risk for tourists, according to health and safety chiefs. "Paris is the capital of love, we are all very proud of that, but there are more beautiful ways of showing that love than by putting padlocks on a bridge,” according to Paris Deputy Mayor Bruno Julliard in an interview with Le Parisien.

Jumpstarted by a social media “No Love Locks” campaign, they planned an unsuccessful initiative back in August 2014, as it had become an “eyesore.” “[The removal of the locks is a] strong first step after a long time of inaction," said No Love Locks Co-founder Lisa Anselmo. ”Our followers are clamoring for that because they are fed up with what's happening to their city.”

With love locks first appearing on the bridges in 2008, the tradition actually dates back about 100 years, as young girls placed the love padlocks for fear of doomed love. Couples would attach locks with their names written onto the bridge before the keys were thrown in the Seine.

The iconic structure will now have “padlock-proof” Plexiglas instead of metal grilles; a symbolic birth control to passing couples. The City of Love just became a little less romantic.

If you like this article, please share it! Your clicks keep us alive!
Tags
Pont des Artes Paris