The Latest Heartbreaking Homophobia + Hypocrisy in Uganda, Italy and America 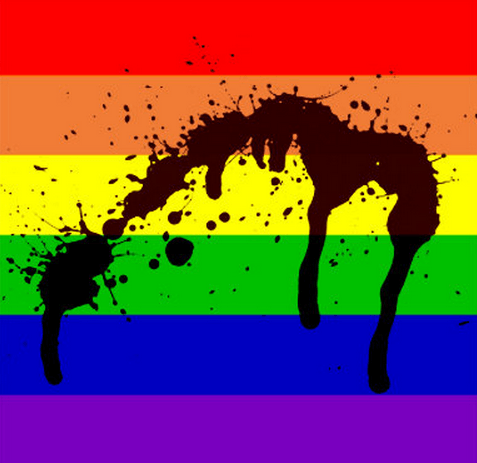 While gay rights have unarguably marched forward both societally and politically in the good 'ol US of A — Ellen DeGeneres just hosted The Oscars and seventeen states have legalized same-sex marriage — there remains a staggering stigma surrounding homosexuality in much of the world, serving as a poignant reminder of how far we still have to go as a civilization and species.

First up in the crazed morass of geo-politics with a homophobic agenda? Uganda. Ugandan politician and parliament member David Bahati has successfully passed a law which makes homosexuality straight-up illegal — punishable by life — and "attempted homosexuality" attracting a sentence of up to 7 years. And believe it or not, this is a more tempered manifestation of Bahati's original intentions; when he first introduced the law in 2009 he sought the death penalty for homosexuals. He also went on record likening "aid suspensions" in the aftermath of Uganda's anti-gay legislation to "blackmail."

But what some (Bahati) might call blackmail, others (Obama) would call "soft-power," meaning every facet of exerted force on another country that isn't military, i.e. threat of death. What's tricky dear Ravish-ers is that the U.S. government has not only been funding and training the Ugandan military for years, but sends $500 million in foreign assistance annually. Our countries are more-than-a-little tangled.

Currently the U.N.-backed African Union Mission in Somalia (AMISOM) is battling radical Islamist/al-Qaeda group al-Shabab and guess what, Ugandan troops make up a huge percentage of that movement, hugely funded by American dollars.

John Kerry has since gone on record insisting that the U.S. has to review our diplomatic and fiscal relationship with Uganda, as the country's new legislation directly belies our own belief system:

Now that this law has been enacted, we are beginning an internal review of our relationship with the Government of Uganda to ensure that all dimensions of our engagement, including assistance programs, uphold our anti-discrimination policies and principles and reflect our values,” U.S. Secretary of State John Kerry

Of course, this begs the question: what about the countries we're in bed with — say Saudi Arabia for instance — who's laws include flogging, imprisonment and death for homosexual behavior, not to mention institutionalized misogyny? 18% of our nation's yearly consumption of petroleum — is imported from Saudi Arabia. Would Kerry argue that Saudi Arabia has been a "paracolonial dependent" on the U.S. for so long that we've long accepted their bigotry ... while the Ugandans are arguably regressing in their socio-political attitudes, de-modernizing as we speak and thus will not be tolerated?

It's a shaky, short-sighted, hypocritical argument at best. Worse still? The Ugandan people are the sacrificial lamb in America's faux piety and Uganda's homophobia; as a nation wracked with poverty, political strife and HIV, a loss of foreign aid could cause serious suffering. And we're not the only nation staunchly opposing the new legislation; The Netherlands has frozen a 9.6 million-dollar subsidy to Uganda's legal system and The World Bank has suspended a 90-million-dollar loan slated for the strengthening of the country's healthcare system.

But Ugandan President Yoweri Museveni insists it doesn't matter; maintaining the moral fibers of Uganda's people are what's most important. Following new reports from "scientists," Museveni says he's been convinced that homosexuality is not a gene passed on, but rather a choice to "embrace abnormal behavior." Museveni has also explained his ongoing tolerance for questionable morals and behaviors in America, and perhaps the time has come to part ways; they are other nations (maybe Russia?!) who'd love to do business mutual homophobes instead.

We have been disappointed for a long time by the conduct of the West, the way you conduct yourselves there. Our disappointment is now exacerbated because we are sorry to see that you live the way you live, but we keep quiet about it. Now you say 'you must also live like us' — that's where we say no...

If the West doesn't want to work with us because of homosexuals, then we have enough space here to live by ourselves and do business with other people. We see how you do things, the families, how they're organized. All the things, we see them, we keep quiet. It's not our country, maybe you like it. So there's now an attempt at social imperialism — to impose social values of one group on our society. — Museveni told CNN's Zain Verjee in Entebbe.

Pope Benedict XVI has come under more scrutiny in the genius-ly named "Vatileaks" scandal which first broke a year ago. God's ex #1 was accused of quitting his Pope-dom because of a salacious gay priest scandal; apparently the Vatican pressured him to step down before the impending sh*t storm hit the fan.

Like some Dan Brown Da Vinci Code wet dream, the Italian media is still in a frothing frenzy following the receipt of of a 300-page internal investigation revealing an intricate web of sordid undertakings from blackmail and corruption to a hot bevy of gay sex at the Vatican. Furthering the pulp fiction feeling of this tale, the pope's butler, Paolo Gabriele was the culprit who snatched the red leather-bound documents and leaked papal correspondence designed for the Pope's successor.

Amid renewed fervor that he stepped down under duress — he was the first pope to step down in 600 years! — Benedict has broken his silence and issued a public statement:

There is absolutely no doubt regarding the validity of my resignation from the Petrine ministry. The only condition for the validity of my resignation is the complete freedom of my decision. Speculation regarding its validity is simple absurd," he wrote in answer to a request by the website for comment on recent Italian media reports. — Former Pope Benedict in a letter to Italian website Vatican Insider.

The pope was no stranger to the intrigues, but he probably did not know that under his pontificate there was such a complex network and such intricate chains of personal interests and unmentionable relationships. – Ignazio Ingrao, Panorama.

Yeah, right. Turns out there's even a documentary — “Le Notti Brave Dei Preti Gay,” or “Good Nights Out for Gay Priests” — that exposes a gay priests galloping all around town (and each other.) Is the best we could hope for is an apology? Or that there is a hell for all the actual "sinners" — ya know, the ones ruining lives with white collars?