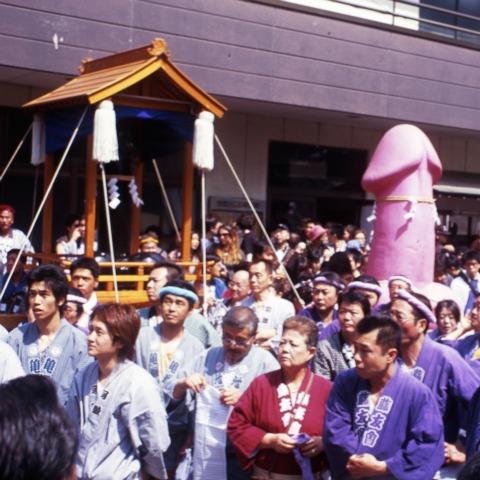 Alright kids, your hometown's county fair is about to look super lame. That's right—forget the ferris wheel or the potato-sack slide—Japan's long running annual festival, Kanamara Matsuri or "The Festival of the Steel Phallus," is all about the penis.

The dick-centric shebang hits the streets of Kawasaki every spring chock full of penises of all shapes and sizes; you can eat cock lollipops, light a willy candle, pose with schlong sculptures, or even wear some man-hammer memorabilia. The choice is yours! Contrary to sexphobic 'Merica, you'll see everyone from kids to old folks roaming the festival.

Although it makes an amusing spectacle (and totally awkward awesome first date), there is a purpose to it all ... and no it's not to induce rampant promiscuity, oppressive patriarchal forces or spontaneous blow-jobs. Instead, it's all about promoting safe sex and preventing HIV. Who knew?!

The festival—not surprisingly—has an interesting history too. According to legend, Kanamara Matsuri started way back in the 1600's when the town brought in a hefty amount of travelers and traders who frequented the tea houses—and by "tea houses," we mean straight-up brothels feigning innocence to gullible foreigners. A nearby shrine became a place prostitutes frequented where these fine-feathered ladies would pray away demons to keep their ladybits safe. (While knowledge of STIs was extremely limited back then, the women clearly felt the, um, effects of their presence and believed they were the work of evil spirits.

Speaking of evil spirits, the legend of a sharp-toothed demon (vagina dentata) that hid inside the ladybits of young unsuspecting women and—whoops, sorry!—castrated two young men on their wedding nights has driven the whole damn thing. Apparently, the young women were rather disturbed at their carnivorous vaginas' behavior—imagine that!—and sought the help of a blacksmith to forge an iron phallus to break the demon's teeth.

Hey! But what about a vagina festival? Oh, what's that? You already have one? Japan, we love you.

While it doesn't seem to be as popular as Kanamara Matsuri, the Ososo Matsuri definitely exists. Giant snatcheroo snacks and monuments take over the streets as folks gather to celebrate women's health and fertility. Why is the penis one bigger? Hard to say, but maybe it's all about practicalities here; penis stuff seems easier to build and bake. Or—as our feminist-leaning selves would believe—perhaps our lovely male-dominated Western media prefer to report more phallic-related news.

Either way, let's all get our asses over to Japan. (I mean, as Seth points out in Superbad, "the best kinds" of foods are totally shaped like dicks! Popsicles, baguettes, corn-dogs—you name it!)