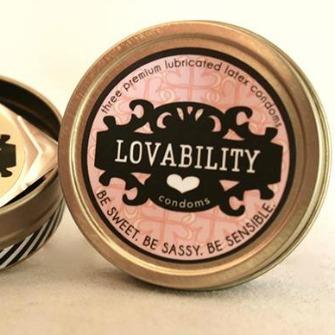 We know that safe sex is important, but what is it about that weird condom stigma? It's so bad, that people have invented various ways to suit up discreetly. Add a woman to the mix, and you may as well sew a giant red letter A to your chest ala Scarlet Letter.

Entrepreneur Tiffany Gaines developed a line of male condoms (meaning, condoms fitted to a penis) with a feminine appearance to the packaging. Why? Gaines got savvy with some frightening statistics about the spread of STIs and sought to make a condom that females would feel comfortable carrying around. Unfortunately, she discovered, many women opt out of carrying rubbers around out of sheer embarrassment. Thus, Gaines's chick-friendly condom company Lovability was born. Hooray! They even come in a classy little tin so you can keep them safely in your purse.

Yeah, too bad Chase Bank refused to process Lovability's online orders. Seriously. A representative emailed Gaines and informed her that they "will not be able to move forward regarding processing with Chase Paymentech, as processing sales for adult-oriented products is a prohibited vertical."

Wow. Okay, but, given JPMorgan Chase CEO James Dimon's short temper, it may seem natural that the company would seek the squelch the dreams of a 23-year-old business woman, but Dimon's investments and personal outlook on economic mobility make this case even stranger.

First of all, Dimon is not some stodgy white male Republican. When asked, he says he's technically a Democrat but "barely." He's all about educating and encouraging people to shimmy up the star spangled ladder to reach the American Dream. Why would a company run by a man with (albeit it, archaic) dreams of economic prosperity for all create a hurdle for a woman doing just that?

It's not the condoms themselves. Chase Bank  takes care of Trojan's mergers and acquisitions. Hello hypocrisy!

Why Lovability then? Why condemn poor Gaines and her inspirational entrepreneurial spirit?

Hate to say (errr, write) it, but we're betting it's because she's a woman. The truth is, there's still an unhealthy cultural stigma attached to female sexuality in our culture. If a man carries condoms around, he's being safe. Good boy. When a woman does it, she's obviously engaging in naughty promiscuous sex and therefore must be burned at the stake with the ashes of Joan of Arc! Exaggeration? Only slight.

Gaines fought Chase's decision tooth and nail, and eventually kinda won. Chase will process her orders, though their opinion of condoms as "a prohibited vertical" refuses to change. The message they're sending is: "okay young lady, because you're making a fuss we'll compromise. You're lucky we're being so nice." Not okay. The cultural perceptions of female sexuality are still Puritanical as ever, and it is business transactions like this that bring the reactionary fist back to the fight.

Image: how cute is that tin? Courtesy of, Facebook