How One Woman Took The Lead In Papal-Ruled Rome 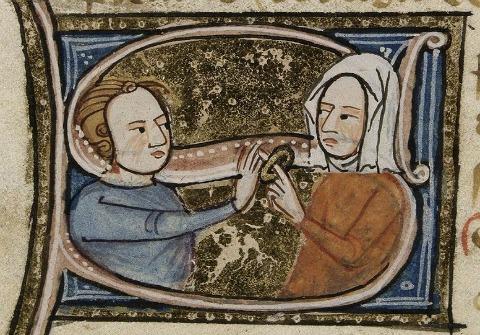 Power in the Catholic Church = men, both now and historically. Likewise, the history of power along the Italian peninsula is rife with XY chromosomes. Put Italy and Catholicism together and we’ve got a bonafide women-in-power vacuum. But some women were able to finagle their ways into a measure of influence via strategic alliances—and it’s likely that no one did this better than one Marozia of Rome.

Papal-ruled Rome was in sad shape in the ninth century. There were 16 Popes within 50 years, and scandals galore. These celibate tools of the Lord in actuality seemed to get it on the regular (one—Leo VII—is said to have died of a heart attack mid-coitus), and as many as 15 of them were murdered in power grabs. During this Papacy free-for-all, local political players schemed to get their man to be Pope.

And here comes Marozia—aristocratic daughter of connected parents within the familial House of Tehophylact. Here’s the run-down of her sordid ascent:

1. Her parents introduce young Marozia to Pope Sergius in 904. They became lovers, and then parents! Embarrassing for the Pope—political leverage for the family.

2. When Marozia’s parents (and husband after the Sergius affair) die, she steps up to the plate to continue her family’s influence.

3. Pope John X decides to challenge Tehophylact House power. Bad idea. Marozia marries a rival to the pontiff, whose thugs then kill the Pope’s brother and eventually, John X himself. (According to historical record, they “most wickedly suffocated him.”)

4. Who should secede the deposed Pope? By Marozia’s estimation, her son (by another Pope, remember), John. She had to kill a couple other people first, but succeeded in plopping her son’s tush on the Papal throne, where he was declared John XI.

5. Marozia is sitting pretty at this point, and is exceedingly influential in Rome. But she wants more! She proposes to marry a third time to ally with a powerful adversary—the King of Italy. And what better wedding gift than to be named Emperor and Empress by her son?

6. But wouldn’t you know it, Marozia had another son, Alberic, by her first husband—and he wasn't too keen on being elbowed out of power. So the Emperor and Empress don’t last too long: Alberic leads a Roman rebellion attacking their castle. He captures Marozia and John XI, and imprisons them for the rest of their lives.

Marozia was probably a terrible person, but she did have chutzpah. Her maneuverings to ascend to such power were highly unique for a woman. Ultimately, though, it was only through her relationships with men that her power was attained (and lost): lovers, husbands and sons. The man is the head, but the woman is the neck, right? No thanks.

Prevalent as sexism remains, at least if an unsavory woman wants to vie for political office these days, she does it largely on her own merits, and isn’t simply reliant on sexual access and familial men paving the way.

If you like this article, please share it! Your clicks keep us alive!
Tags
Pope
rome
power
medieval
empress
marriage
sons
marozia