Dear Media: A Millionaire Dad Staying Home With The Kids Is Not Newsworthy 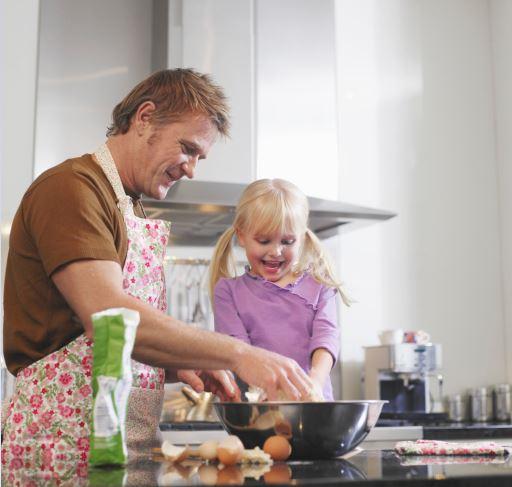 In the space of an hour yesterday, a gallon of bleach fell on my face (splashing me in the eye and ruining my dress), my two-year-old dumped a crushed bag of Pop Chips on the floor, and I dropped my brand new iPhone 6 into a diaper . . . full of poop. While this tragically comical chain of events occurred, my husband, bless his hardworking heart, was clicking away at his keyboard, untouched, undisturbed even, at a lovely fully-stocked-with-snacks-and-coffee office in Silicon Valley. This was after a probable full night sleep and breakfast not shared. Because three days a week he does this; he goes away from home to work. And I stay here. Raising our children.

That's our arrangement—he's grateful that I do the dirty work and I'm grateful he makes the money so I can. And despite evidence to the contrary, I'm quite happy to have waltzed away from my full-time job as a hospice nurse, leaving behind the poop and vomit involved in registered nursing to take on the poop and vomit involved in raising kids. There was no fanfare the day I sat down with my nurse manager and told her I wouldn't be returning after my maternity leave; that I had chosen a life of servitude, er, domesticity, over my career. No one threw a party. There was no cake. No news headline. I just took the photos off my desk, handed in my laptop, hung up my stethoscope. And went home.

So today, when I read about this millionaire dad who quit his job to be a (gasp!) stay-at-home dad (double gasp!), my response was a combination of bemused and irritated. Don't misunderstand: It's inspiring that any parent would A. listen to their child long enough to hear that they were missed, then B. actually do something with that information. There aren't many fathers that would—or could—walk away from their job and live off their nest egg just to be able to do the morning carpool. I nearly shed a tear.

Because here's the thing: I'm a mother of five with kids ages 2 to 19, and I've been home for most of those years. I've cooked somewhere in the neighborhood of 7,000 dinners and changed 37,463 diapers. No one had to ask me to stay home, and I received no accolades for doing so. That I would make every doctor and dentist appointment, every band performance, every parent teacher conference, that I would sit bedside with a pail to catch their vomit every time they were sick, was . . . expected. No headlines.

Just motherhood in its most standard form.

Perhaps the headline here is that this gentleman would be willing to give up his enormous salary to be there for the first day of school. In sharp contrast, I gave up a measly $75,000 a year to be able to watch my 16-year-old son play 22 trumpet solos during band season last year. Dare I suggest that when your household income is cut by a third and you don't have $1.9 trillion of assets, it is slightly more newsworthy. We aren't struggling by any means. But we have given up certain luxuries in order to afford me the ability to see those 22 solos. Vacation for example.

Maybe it's noteworthy that Mr. El-Erian turned his back on his several million dollar salary to turn toward his children because of his gender. Because he is A Man. A Father. Well bravo, Mr. El-Erian, for doing what women have been doing for.ev.er. Be right back. Let me fetch your bon-bons and the remote, right after I start my fifth load of laundry for the day. I'll knit you a blue ribbon while I'm at it. Congratulations on this bold and selfless choice.

I sound trite . . . but when was the last time you read a feature story about a mom who got up 16 times during the night and still managed to get her other kids fed and off to school? With clothes on and everything. Because let me tell you from the front lines of motherhood, that is a sacrifice. Existing on two cups of strong coffee and the crusts of your toddler's peanut butter sandwich? Sacrifice. Dropping your phone in poop? Sacrifice (also: gross). Not showering for three days because that means the baby would have to cry? Sacrifice. And yes, walking away from your rewarding career is a sacrifice. Whether you are a mother or a father.

See, parenthood has sacrifice written all over it. It's not a headline. Certainly not for mothers and not very often for fathers, either. It's a sacrifice from those early days of sleepless nights to the vacations you will forsake to be able to pay for diapers/shoes/prom dresses/trumpets/college/six gallons of milk a week for growing teenage boys. You may forget you had hobbies for a period of time. You may find that more days than not you smell like vomit or that you don't even know where your lacy bras are anymore, much less if they fit. You may have to wait a week for an orgasm because your toddler has impeccable timing. And you will do it, mostly, happily.

But no one will give you a blue ribbon.

You will not make headlines.

Instead you will have a thousand memories of first words and first steps and first days of school. You will have kids who will eventually (operative word eventually) be thankful to you. You will be able to say you were there. Whether you were a news feature or not.

And here's a spoiler alert: You won't be.

If you like this article, please share it! Your clicks keep us alive!
Tags
stay at home mom
stay at home dad
Mohamed El-Erian
millionaire
parenting
Kids