Slings And Splints: The First Time I Fell In Love 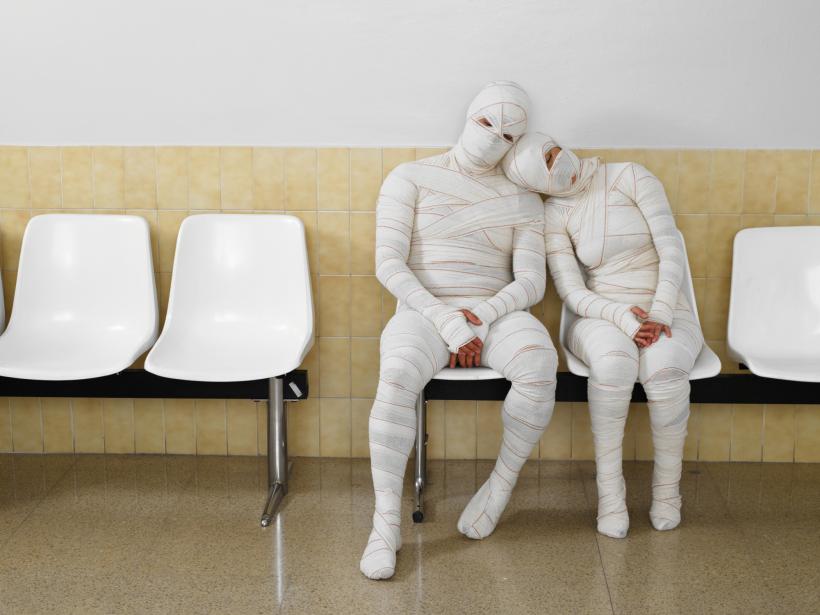 When I was twenty-three years old, I lived in New York City and was in love for the first time with a handsome bartender who poured drinks as smoothly as he charmed his way into my life.

I was pretty sure I was in love with him because for weeks I had cried every time we had sex.

“I must have something in my eye,” I’d say afterwards.

“Am I doing something wrong?” He finally asked me.

“No, of course not,” I sniffled. The truth is, I wasn’t sure what exactly I was feeling because I hadn’t felt it before. I chalked up my post-coital tears to my being in oxytocin overdrive.

“You...just make me happy,” I told him a few days later after he called me during his break at the community college where he was completing his degree. He’d wanted to make sure we were still cool despite my reassurance (“Honestly, I just chopped onions before you came over!”) from the previous night.

“I’ve never made a girl cry tears of happiness before,” he said. Nor had I cried them before. Was this love? I didn’t have a clue.

I was a late-bloomer. I didn’t slow dance with a boy until I was 12 and my sloppy first kiss didn’t come until I was 16. While most of my peers were fingering each other, I was figuring out how to get to New York. For a very long time, romantic love was an esoteric thing to me that I assumed would occur eventually, like taxes and having your clothes dry-cleaned. Being raised Catholic, along with consuming a healthy diet of Nora Ephron movies, caused me to believe that whenever I did fall in love, it would happen with the right guy, at the right time, and because it had taken so long, it would be big.

Monumental. Life-changing. A romantic setting of votive candles, scattered rose petals and D’Angelo crooning in the background, so, basically—perfect. But mostly I wanted love to hit me like an unequivocal ton of bricks.

It was October. I was on the treadmill at my gym in Greenwich Village, easing into a slow jog when I felt—and heard—a loud POP. I immediately sank to the ground writhing in pain. A trainer soon approached me to assess my injury.

“Ooh. Yeah, you definitely dislocated your shoulder,” he said. “We’ll have to call an ambulance.”

An ambulance and a dislocated shoulder?! As far as I was concerned ambulances were for heart attack and car crash victims and people who hadn’t had bowel movements for days. Other than spraining my ankle in the eighth grade, my limbs, and all other body parts, had perfectly stayed intact and healthy. I was freaking out and, so, naturally, called my boyfriend.

“A dislocated shoulder? That’s nothing! I had tons of those playing football,” he said to me. “Just pop it back in.”

“Pop it back in?!” I knew his slight insensitivity was related to my interrupting his celebrating the end of midterms with his classmates, but I was not popping limbs back into place or traveling via ambulance for the first time alone. I hadn’t had a serious boyfriend before, but I knew enough that, besides having cool, ratty T-shirts to borrow and morning sex, this was the sort of thing boyfriends did.

“I’ll be right there,” he said. And he was, holding my hand in the ambulance, scooping my tears away.

Hours later, a Peter Benton-esque ER doctor informed me that I didn’t break any bones nor did I dislocate my shoulder. It was some kind of rhombus muscle tear. He asked me if there was any reason for my back and shoulder muscles to be exceptionally tight.

“I’ve had a bad cough for a few months,” I said. “There’s a window in my apartment that’s stuck. It won’t close, so there’s a draft.”

“That could explain it,” the doctor said. He then turned to my boyfriend: “You better shut that window for her.”

We shuttled back to my apartment in Brooklyn, my left arm in a sling. I was still in my gym clothes, so he helped me take off my clothes before I jumped in the shower; he then went to work to unstick my window. Under the warm water, I thought of the day’s events, of us, of him. How he called my mom to break the news to her and reassured her, how he tried to make me laugh by making fun of Celine Dion iPod playlist, how he only took my top off while he was undressing me. Was this love?

I hopped out of the bathroom, a towel gingerly covering me, when I heard: “Babe! Babe! I closed it!” I looked to see my boyfriend hovering underneath the windowsill, proudly showing his handiwork: he had indeed shut the double-paned window.

No sooner did I manage to squeeze out, “Awesom—“ when, somehow, someway, the top pane of the window became unstuck and slammed shut on his left hand.

I remember hurriedly pulling on a pair of sweatpants and a sweater without a bra or underwear, shouting, “Hold it above your heart! Hold it above your heart!” because that’s the only thing I remembered from my high school first aid class. I remember rushing to the window, attempting to lift it with my one good arm, so I could retrieve his finger tip because I remembered from watching a lot of Clooney-era “ER” that you needed to put severed limbs on ice “stat”. I also remember him telling me, after a few lame attempts, to, “Forget it.”

I remember frantically reaching for my cell phone to call 911 but then him stopping me because he didn’t want to go to a Brooklyn hospital, so I called a cab instead (I remember thinking, “What’s wrong with a Brooklyn hospital?”). I remember us pulling up to the exact same hospital we had just left only two hours before, entering the same ER, sitting in the exact two seats at triage, seeing the same Peter Benton-esque ER doctor walk by us.

I remember him pulling a classic double take when he spotted us, asking, “What are you two doing back here?” I remember my boyfriend raising his maimed hand and saying, “Remember that window you told me to close? Well, I closed it.”

I sat beside my boyfriend while his left fingertip was being temporarily stitched back together. I held his hand, even though the sight of blood and needles makes me faint, because I knew, besides giving birthday BJs and rearranging his kitchen so it made “better sense,” this is what serious girlfriends did.

We shuttled again back to my apartment Brooklyn, his left middle finger taped and splinted. We collapsed onto the couch and then he was taking off my clothes as I jumped on top of him. I thought of the night’s events, of us, of him. How I called his mother to tell her the news and reassured her, how I ran out to the closest bodega, underwear-less and bra-less, to purchase a box of Triscuits because he was starving, how I cried while the doctor attempted to put his finger back together.

That night had been monumental. Life-changing. It was far from perfect, but I had definitely been hit with something.

Straddling him, with my left arm in a sling and his left finger bandaged like a mummy, I started to cry.

I live in Toronto, now. My left shoulder is still bum; it juts out a bit further than the right. It clicks and clacks when I move it up and down. My fingertip-less ex-boyfriend and I broke up a few months after our accident-prone evening, and we no longer keep in touch.

There have been new lovers and new cities, new crying fits and new confusion. Thanks to unfriending and deletable pictures on iPhones, it’s easy for me to forget these men.

It’s easy for me to forget our memories, what it felt like to be with them, what it feels like to love. I find myself thinking of romantic love as an esoteric thing again, and I wonder how, or if, it will find itself back to me again.

Then my shoulder clicks, and I remember that love might not look like a Nora Ephron movie or feel the way I’ve expected, but it exists. It’s still there.

And then, sometimes, I think, maybe I’ll skip the gym today.

If you like this article, please share it! Your clicks keep us alive!
Tags
first love
Relationships
romance
late-bloomer
personal essay
Memoir