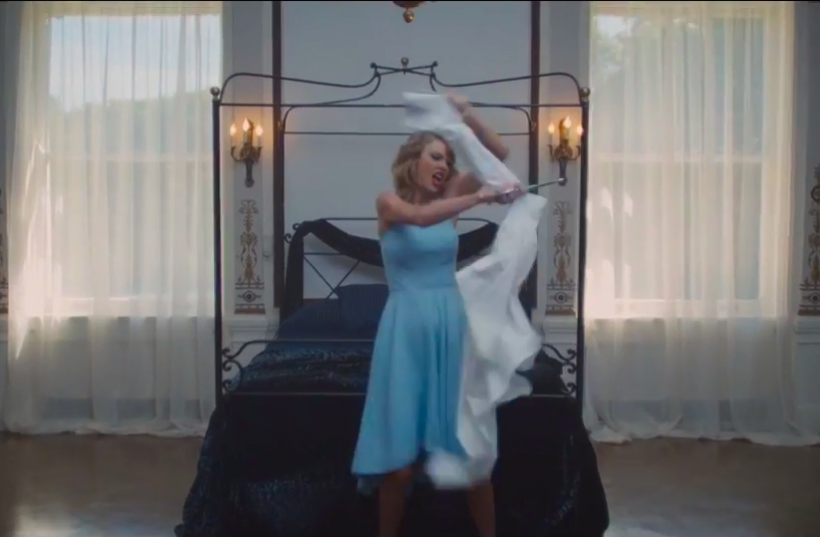 When I ponder life's biggest questions, I can't help but ruminate on this one: How will history remember music videos? Some artists snag (seemingly) limitless budgets, and let creativity run amok. Some have a clear message. Yesterday, we greeted the day with Taylor Swift's new music video for her song "Blank Space." Like Lana Del Rey's recent vid, this one was intended to be analyzed.

Why? Taylor takes on the "crazy girlfriend" and "psycho ex" trope that's commonly—and unfairly—assigned to lovers.

This music video feels more like a movie. A terrifying movie, that is. It starts sweetly. TSwift meets a new man, and they have adventures in some fantasy mansion. If you listen to the lyrics, a more sinister sound emerges. According to Taylor, her past lovers will say she's "insane" and she has a "blank space" just waiting for a man's name. The scene switches to the male lover and TSwift quintessentially carving a heart on a tree (oooh, his name Sean—that's a hot guy name). Shortly after, the relationship turns sour and the couple begins fighting.

Cue "crazy." Taylor starts destroying Sean's possessions—she even cuts holes in the front of his shirt, ala Mean Girls, before taking a golf club to his car. We watch her up the ante as the video progresses. Soon, it looks like Sean has enough material to file a restraining order against Swift. He takes off, and a new man arrives. It's so over the top, that it's clear the vid is mocking.

The thing about "crazy" is that it's often a cruel way of saying "we didn't share the same feelings." In my life, I called a man "crazy" because he asked me to listen to "The Cave" by Mumford & Sons. If we're being real here, I knew what was going on: I had run amok with his heart (shame on me), and he was gathering the strength to explain this to me. Another time, I screamed that a man was "crazy" because he (discreetly and, dare I say, politely) asked if I'd join him and his girlfriend in a threesome. And there's one more: I said an ex was "crazy" when he, bravely, admitted that he was still in love with me.

See the pattern? (Aside from the fact that I can be a questionable human being at times.) I wasn't interested, so I decided that such demonstrations of feeling (be it love or lust) were inconvenient. "Crazy" was a defense mechanism.

We see the trope everywhere. The strange antics of Andie (played by Kate Hudson) in 2003's rom com hit How To Lose A Guy In 10 Days exaggerated stereotypes about what women do in relationships to drive men away. Her overly emotional, dramatic, approach to dating elicited laughs—but it's offensive when considering how the stereotype can do real damage. It's not just this movie. We hear popular songs about fierce females wrecking their cheating beau's car, stealing his credit card and literally stalking him. It doesn't help that women are supposedly more emotional (or, just more in touch with their feelings).

And it's for this reason that I appreciate Taylor's mocking video. "Crazy" is a cruel word to call anyone, and this "psycho ex girlfriend" trope is unfair. In real life, most spurned women wouldn't actually steal their ex's credit card and shop 'til they drop. When TSwift stars in this video, we see how unfair and foolish this notion is. Come on, who actually stabs paintings? Love can make us to strange things, but it's not okay to generalize the actions of women and employ a harmful stereotype.