Obama Girls Aren't The First To Be Ridiculed, And They Probably Won't Be The Last 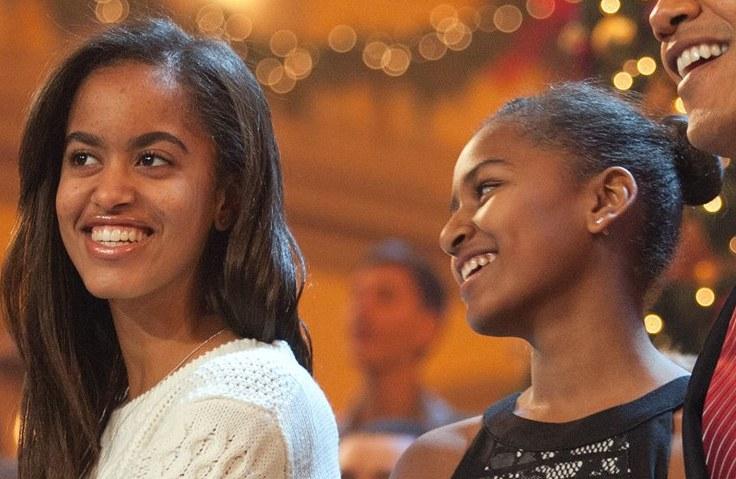 Alright, alright, you're probably sick of this story by now—but we're not, so you'll just have to sit tight.

GOP aide Elizabeth Lauten had some unnecessary critiques to make about President Obama's daughters (Malia and Sasha, 16 and 13 respectively) following the customary—yet, totally weird—turkey pardoning ceremony at the White House. Lauten was oh-so-appalled by the teens' behavior, that she took to Facebook and wrote:

"Dear Sasha and Malia, I get your both in those awful teen years but you're a part of the First Family. Try showing a little class. At least respect the part you play. Then again, your mother and father don't respect their positions very much, or the nation for that matter, so I'm guessing you're coming up a little short in the 'good role model' department. Nevertheless, stretch yourself. Rise to the occasion. Act like being in the White House matters to you. Dress like you deserve respect, not a spot at a bar. And certainly don’t make faces during televised public events."

Lauten received much-deserved backlash for her comments. Ultimately, she resigned—but not before issuing a half hearted apology that read more like a masturbatory exercise in narcissistic saccharine speech (choice quote: "after many hours of prayer, talking to my parents, and re-rereading my words online, I can see how hurtful my words were . . . those judgmental feelings truly have no place in my heart"). The remarks were spiteful and vitriolic on a whole bunch of levels, but Lauten's motive were ultimately crystal clear: she doesn't like the president's policies, so she thought she'd take a verbal machete to his personal life.

Pick on politicians all you want. They fought—probably too hard—for their coveted positions, and make decisions with which we don't always agree. Their kids, however, didn't sign up to be the sacrificial lamb. They were merely pulled along for the ride, scathing public scrutiny and all. That doesn't stop our sharp wagging tongues however! Lauten's outburst is far from the first time president's kids have been bullied by the media.

Let's take a peek at our most recent fearless leaders—Bush and Clinton—and see what the circus had to say to their children.

Back when their father, George W. Bush, was president, twins Jenna and Barbara went full-on party girl mode. They drank publicly before turning 21, and even had a few fake I.D.'s confiscated. It's no secret that their father previously (or still? not reallllly our business any more) had an alcohol problem, and the media was quick to make some helpful observations about the twins. The Guardian—in an article title "Bushwacked" no less—ran an entire "feature" tracing the girls' wayward ways...but all wrapped up in this kind of faux, patronizing admiration.

"The cameras caught Jenna, with her blonde highlights and round face leaning over to whisper something to her sister and giggling. In the midst of all the powder-blue suits, they were southern party girls exuding a kind of plump lazy sexuality, evoking warm nights and big cars, chewing gum and margaritas—the appealing opposite of the slick newcastery sheen of the Gore daughters.​"

"Plump, lazy sexuality?" What is this, a community-theater production of Cat On A Hot Tin Roof? I guess I sort of get that it's refreshing that they're not acting all Stepford-wifey, but this description makes them sound like glorified trailer trash. Like a New Yorker clucking their tongue at the sheer "quaintness" of their "sleeveless and tight" clothing appropriate for a "Mexican restaurant." And what the hell is one supposed to wear to a Mexican restaurant anyway? Something . . . revealing and tight I guess? Ugh. That whole paragraph is just chock full of latent racist and classist shit if you ask me.

"So far the girls seem the most appealing of the Bushes. They are not overly concerned with their father's career. They are not humourless advocates of his cause. They are spirited and ordinary and looking for the party . . . The truth is that the Bush daughters could add colour and interest and humanity to the alarmingly conservative administration. They could be the lighter side of their father's new "civility"; they could represent the easygoing fun-loving beer-swigging spirit that has vanished in his stiff old man's White House; they could be his wink at the audience while he panders to the right-wing. Watch. They could prove to be a political asset."

Again. I dig that they're not being slut-shamed or asked to forgo their adolescence in order to proper flank or serve as a youthful foil for their father's career . . . but, that's exactly the point. It shouldn't be the children's responsibility to foist their father's political agenda—be it as a "humourless advocate" or offering a "fun-loving beer-swigging spirit." And two daughters sure as shit shouldn't serve as anybody's "wink" thankyou verymuch. This notion is as insulting to the American public as it is to Jenna and Barbara. Are two underage girls drinking in a bar really going to assuage my fears about his conservative foreign policy measures or um, his claims to serve as a mouthpiece for God?

Moral of the story? Don't call children political assets. Please and thank you.

Chelsea, Chelsea, your father entered the White House smack in the middle of your adolescence. Condolences, m'lady—the mere thought of enduring that is nothing short of PTSD-inducing. Like all tweens, Chelsea was growing into her looks in 1992 when Bill Clinton entered the White House. Nostalgia and general empathy usually triggered knowing smiles from adults who remember being that age. (And let's be honest. 1992 wasn't that forgiving to any of us.)

Rush Limbaugh, on the other hand, took it upon himself to publicly comment on said awkwardness on his TV show—ugh, yes he had that—likening 12-year-old Chelsea to a dog. Limbaugh—while certainly being the most egregious and hateful of the whole bunch, was only one of many men to ridicule Chelsea's adolescent gracelessness. How dare a 12-year-old girl in the public eye deign to have frizzy hair and wear tie dye?!

Mike Myers (as part of his now infamous Wayne's World's bit), explained that, "adolescence thus far has been unkind, we think she's a future fox,"
on SNL, while John McCain went the more straight-forward route: "Why is Chelsea Clinton so ugly? Because her father is Janet Reno."

Repeat after me. A woman's worth—if we are to even use the rhetoric of commerce here—is not directly correlated to her facial symmetry, breast size, or clothing choices. Children of famous people—political or otherwise—are actually not yours for the satirizing, or vivisecting. The fact that these three men (among other media blowhards and no, not just men) all separately—not in collusion—felt compelled to call a 12-year-old girl "ugly" on national television speaks not only to our pervasive obsession with physical beauty, but sanctioned misogyny of the pseudo-pedophilic order.
It's not pretty people! In conclusion?
Using power-people's children as a means to advance your agenda is not even picking low-hanging fruit. It's licking the dirt and saying how good it tastes.
If you like this article, please share it! Your clicks keep us alive!
Tags
Malia
Sasha
Michelle
Barack
Obama
President
white house
Teen
slut shaming
skirt
Elizabeth Lauten
parents
mother
prayer
Rush Limbaugh
Chelsea Clinton
Jenna
Barbara
bush
Al Gore
daughters
George W. Bush
alcoholic
abuse
dog
1992
partying
drinking
underage
fake ID
plump
lazy
sexuality